Poetry and science are two of my passions. When I was an elementary teacher, I loved connecting poetry with the different science units I taught. I was always looking for poems to integrate with my units on trees and soils, astronomy, animals, and the life cycle of butterflies. I suppose that’s one of the reasons why Joyce Sidman is one of my favorite children’s poets. She is able to weave her knowledge of nature and science seamlessly into her extraordinary poetry.
I was thrilled when I heard that Joyce was publishing a collection entitled Ubiquitous: Celebrating Nature’s Survivors this year—especially after I watched the trailer for the book. 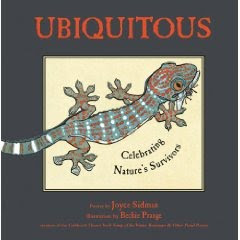 
Joyce Sidman explains how her book Ubiquitous started at her Web site:

My sister is a biologist who works with insects. One day, on an impromptu nature walk, she snagged a beetle, held it in her hand, and remarked about how successful beetles are--how many species there are in the world. She went on to explain that they had mutated from flies; their forewings had become hardened and armored, allowing them to survive better than flies under extreme conditions. This discussion started me thinking about what allows one group of organisms to stick it out here on earth, while others become extinct. Boy, was it ever interesting to find out! I did more research for this book than any other; but I learned more, too--I basically ended up studying evolutionary history.

Joyce responded: This book took a long, long time to write, because I really had to feel my way. I am not a scientist, and the further I dug into research, the more science seemed to be involved. I started thinking about the idea about eight years ago. I thought it would be fun to find lots of "survivor" organisms to write about, and eagerly listed a whole bunch of them to explore. Then, as I delved deeper into research, I realized that organisms survive for all different kinds of reasons, some of them having to do with disruption by man. In fact, because I didn't want this to be a book about "urban" animals, I deleted poems I'd written about Canada Geese, kudzu (an invasive vine), and pigeons. I wanted to choose organisms that had developed survival mechanisms long before humans showed up. So I went slowly, making sure I was following the right paths, checking in with my biologist sister every once in a while for her comments. Sometimes I put away the book and worked on other things.

Then I decided to group my chosen organisms according to evolutionary history, and that opened another can of worms. My brain was sorely strained by trying to keep all my epochs straight! I bought a big chart called "A Correlated History of Earth" and hung it on my wall.

Beckie went through similar efforts to achieve dynamic yet accurate illustrations. We went back and forth on many facts, and she spent a tremendous amount of time on the timeline. She also caught some math errors of mine (thank goodness!) when I was translating inches into centimeters in the nonfiction notes. I am thrilled with her vividly beautiful artwork, which is similar to, and yet so different from, Song of the Water Boatman. The book is everything I'd hoped it would be.

The book is also everything I hoped it would be. And more!
Although the Ubiquitous may seem a slim collection with just fourteen poems—it is a substantial book. It takes readers from BACTERIA, the first form of life that appeared on our planet over three billion years ago to HUMANS—who appeared very late in earth’s history. In between the poems about bacteria and Homo sapiens, readers will find poems and paragraphs of factual information about the following plants and animals:
Mollusks
Lichens
Sharks
Beetles
Diatoms
Geckos
Ants
Grasses
Squirrels
Crows
Dandelions
Coyotes

Joyce Sidman has a talent for selecting the best type of poem to express her ideas about a particular subject—be it a pantoum, a diamante, a mask poem, a poem of address, or a shape poem. To my delight, five of the poems in Ubiquitous are mask poems—which I love. Lichens, a scarab beetle, grass, squirrels, and coyotes all speak to us in their own voices. Coyotes extend an invitation to readers. Their three-stanza poem ends with the following four lines:

Come, come with us!
Come kindle the blue twilight.
Come croon in the wild chorus,
come vanquish the tranquil night.

Grass explains that it can grow “in places/others can’t/where wind is high/and water scant…on steppe or veld/or pampas dry.”
In Tail Tale, squirrels speak breathlessly about themselves and their lives. (There’s little punctuation in the poem.) Sidman’s squirrels explain what they like about being who they are. Just imagine if you too had a “free fur coat/and the ability to crack any/safe known to man.”
I doubt there are many poets who would attempt to write a poem told from the point of view of the lowly lichen. Well, Joyce did—and the poem is a gem!
The Lichen We
(after Siegfried Sassoon’s “Man and Dog”)

Who’s this—alone with stone and sea?
It’s just the lowly Lichen We:
the alga I, the fungus me;
together blooming quietly.

What do we share—we two together?
A brave indifference to the weather.
A slow but steady growing pace.
Resemblance to both mud and lace.

As we are now, so we shall be
(if air is clear and water free):
the proud but lowly Lichen We
cemented for eternity.

A detail from Prange's illustration of lichens: 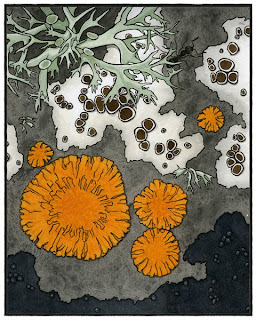 Sidman also includes two excellent poems of address in Ubiquitous. She speaks to a shell in The Mollusk That Made You. The poem begins:

Shell of the sunrise,
sunrise shell.
yours is the pink lip
of a pearled world.

Who swirled your whorls and ridges?


She also interrogates a crow:

What secret orders were you given?
What deeds to do? What plots to thicken?

There are questions in some of the other poems, too, that give readers pause for thought.

Sidman’s poetry about the beginnings of life on Earth…about plants and animals that are survivors who exist here today...both enlightens and engages the reader. It speaks to the wonder of it all. Her prose paragraphs are clearly and concisely written—and contain lots of interesting information.

Beckie Prange’s exceptional hand-colored linocuts serve as the perfect backdrop for Sidman’s poems. They aren’t merely there as decoration. They are an integral part of the book—complementing, supporting, and expanding upon scientific information included in the text. Prange depicts lichens at seven times their life size, provides a close-up look of tiny diatoms as they might appear under a microscope, and illustrates the different stages in the life cycle of beetles. She also gives us a cutaway view of an underground ant colony. This collection is definitely a wonderful marriage of poetry and art…and science!

Ubiquitous gives readers an eloquently condensed and illuminating history of life on planet Earth. I give it my highest recommendation!!!!!

Click here to view a two-page spread about the dandelion from the book.


Beckie Prange Ubiquitous Prints
Giclee prints of Beckie Prange’s illustrations in Ubiquitous are available for purchase at her site. Click here to see them.

Posted by Elaine Magliaro at 10:36 AM

Thabks for reviewing, Elaine! I look forward to this new book by Joyce. I've only recently discovered her and have a couple of her older books checked out to enjoy ("Butterfly Eyes" & "Song of the Water Boatman").

UBIQUITOUS is every bit as fine a poetry book as the two other collections you mentioned. I love Joyce's poetry about science and nature!

What a fabulous review! How does Joyce do it, book after book? Such consistently excellent collections!

I'm in awe of Joyce's abilty to write so many exceptional collections of children's poetry. There isn't a mediocre book in the bunch that's she's published to date.

Elaine, I am always humbled by your reviews of my books. Wish I could have been in your classes when I was a kid. I bet all your students had a wonderful appreciation for poetry!