April is here! I am happy to announce that I will be giving away children’s poetry books during National Poetry Month again this year. As in the past, all you have to do is comment at any of my Poetry Month posts to have your name included in my weekly drawings. (NOTE: If you leave comments at two posts, I’ll enter your name twice…and so on.)

The poetry book prize for the first week of NaPoMo is Douglas Florian’s POETREES! 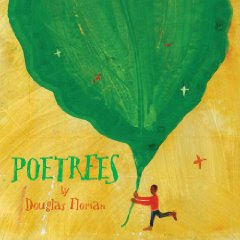 You can read the following poems from POETREES at Florian Café:

Today at Wild Rose Reader, I have a conversation with Janet Wong and Sylvia Vardell about the exciting new project PoetryTagTime.

Posted by Elaine Magliaro at 9:43 AM

A second round of thank yous - I'll be checking in!

I loved the whole idea of Poetry Tag. The ebook is a delight. I hope you are well.
Best regards,
Michele Krueger

I think that I will never see a poem as lovely as a tree.

Yes, I stole that, I confess.

And although I realize he did not write that one, I do love Douglas Florian.

Thank you for all the poetry resources. I'll share them with the staff at my school!