A Passel of Space Poems

I got started late with my Wild Rose Reader plans for National Poetry Month this year. One thing I decided to do recently was to look through all the poems that I’ve written—many of which I’ve already posted at this blog—and organize them by theme. Today, I’m posting original poems that I wrote on the subject of outer space/space travel/planets and the moon/rockets.

I wrote the first two poems that I posted below about Mars for the “Famous First Words” contest that Anne Levy had at Book Buds in 2006.

Here’s what Anne wrote: Okay, we all know what Neil Armstrong said when he set his boot down on the moon. Or at least we all thought we knew.

So now we're sending people to Mars, maybe. We're sending you, in fact. You open the hatch and leap onto the surface of the Red Planet and say ... What? Honey, I'll be home in time for supper? Hi, Mom?

(Note: This poem was the contest winner.)

The sky is pink.

The rocks are red.
There ain’t no birdies
Overhead.

It's bare. It's bleak.
Don't see no plants
Or other green
Inhabitants.

It's desolate.
The air is scant.
Except for me--
No life's extant.
It’s dusty, dry.
I need a beer.
Houston,
Get me outta here!

A Loquacious Astronaut Waxes Poetic after Stepping Foot on Mars

(With apologies to Robert Frost)

Whose planet’s this? I know I know.

His home’s on Mount Olympus so

He will not see me stopping here

To go exploring to and fro.

The polar ice cap’s very near.

Some other life forms came before.

I’m NOT the first Mars pioneer.

Don’t want to be here anymore.

This trip’s a bust to “Planet Red.”

Yo, Earth, give me the go-ahead

To visit Jupiter instead,

To visit Jupiter instead.


Here are two poems I wrote about the demotion of Pluto to dwarf planet status in 2006. Note: IAU stands for International Astronomical Union.

Pluto, Pluto, once a planet.
Made of ice…and, maybe granite,
A distant, tiny, frigid sphere
Demoted to a "dwarf" last year.

Pluto, Pluto, once a planet.
Astronomers said: "We should can it.
It’s much too small; its orbit’s odd
It’s named after a nasty god."

Pluto, Pluto, once a planet.
The IAU? It chose to ban it
From the planetary club.
That’s a solar systemic snub!!!

Sorry, Pluto, you’re way too small.
You’re just an itty-bitty ball…
An insignificant cosmic dot…
A speck in the Milky Way. You’re not
Considered a planet anymore.
Here’s your pink slip; there’s the door.
You’re off the list. Goodbye! Adieu!
Don’t go making a hullabaloo.
There’s nothing…nothing…you can do.
Accept your fate.

Her supersonic broom through space.

She blasted off at speed of light.

She whizzed past Mercury and Mars…

Then headed off toward distant stars.

Across the galaxy she sped,

A black peaked helmet on her head.

An interstellar traveler, she

Explored the Milky Way with glee.

She chased swift comets here and there.

She zipped through clouds of cosmic dust…

A witch bewitched by wanderlust.

There was a witch, I’m sad to say,

Flew near a big black hole one day.

You won’t see HER on Halloween!

I’m taking a trip in the rocket, my dear.

For I will return tonight.

SPACE ACROSTICS
Poor dwarf, so small, so far from the sun,

Lost in a sky full of stars.

Traveling its lonely path around the sun,

Outcast of the darkness.

A band of old buddies

Sticking together through the years.

Too small to be planets,

Each one a world apart,

Dancing a ring around the

Of the sun, bright

Orb in the evening sky, Earth’s

Off the launch pad in a

Kicking off its invisible tether to

Earth, it blasts into space, blazing a

Trail, searing the sky with its fiery tail.

Runways to the farthest outposts of the universe

Showing the road back to the beginning.

Together in a cosmic kindergarten

Holding hands in a circle

Playing Ring around the Sun

Yearning to grow up and have orbits of their own.

THINGS TO DO IF YOU ARE THE SUN

Things to Do If You Are the Moon

Live in the sky.

in your starry terrain.

Be a circle of light,

just a sliver of white,

or hide in the shadows

and vanish from sight.

Hang in the darkness

and dazzle the night. 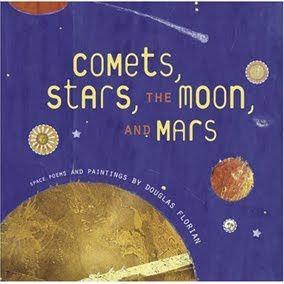 Click here and here to look inside Comets, Stars, the Moon, and Mars.

NOTE: I'm still having trouble with Blogger. That's why the text in this post isn't uniform--and why the letters at the beginnings of the lines in my acrostic poems aren't sized properly. I'm not sure what the problem is.

Posted by Elaine Magliaro at 5:05 PM

Enjoyed all your space poems, Elaine. The Interplanetary Fax made me smile. And how cool that you won the Book Buds Contest. So glad you posted it because I wasn't blogging yet in 2006.

Sorry to hear about your continued Blogger problems. LJ is still very unstable, another DDoS attack today. Getting harder to post things, and readers are understandably having difficulty accessing the site.

Thanks. Dealing with the Blogger problems has been frustrating. At least, I can upload pictures now--and I have line breaks and paragraphs in my text again since I downloaded the Firefox browser. I'm not sure why other kidlit bloggers aren't having the same problems as I.

I hope your LJ issues get resolved soon.

I would like to request for permission to use one of your poems in an english language textbook for fourth grade students.

Could you could let me know how to contact you? An email address would be great

Go to my Profile Page. You'll find my email there.