Gulls Hold Up the Sky: A Collection of Poetry for Adults Written by J. Patrick Lewis 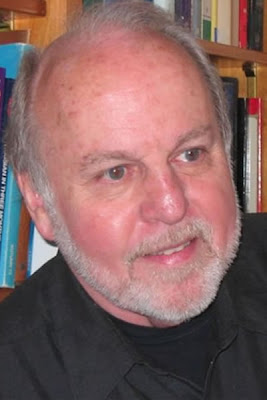 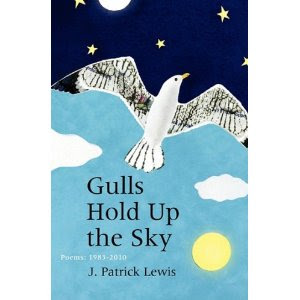 Today, I’m highlighting a book of poems that was written by J. Patrick Lewis, the 2011 recipient of the NCTE Award for Excellence in Poetry for Children. Gulls Hold Up the Sky is Pat’s first published collection of poetry for adults. And a fine collection it is indeed!

Gulls Hold Up the Sky is a substantial collection of more than eighty poems that Pat wrote from 1983 to 2010. It contains both serious and light verse…both rhymed and unrhymed poems. Some of the poems made me laugh out loud. Some gave me pause for thought.

I marvel at Pat’s poetic abilities. He is a true wordsmith. He’s an agile acrobat when it comes to clever wordplay. Jane Yolen wrote of this book: “J. Patrick Lewis’s metaphors are both polished and raw, thought out and yet sprung full blown from an imagination as rich and as any ancient storyteller’s.” X. J. Kennedy said: “Gulls Hold Up the Sky is a smashing collection of light verse and arresting poetry. If J. Patrick Lewis’s fame as a poet for the young has distracted notice from the broad sweep of his talent, this overdue gathering for adults should come as an eye-opener.”

I wanted to celebrate the publication of Gulls Hold Up the Sky and call attention to all the wonderful poems that Pat has written for adults during National Poetry Month.

To whet your poetic appetite—here are titles of some of the book’s poems:

Letter to Galileo
The Battle of Argonne Forest, 1918
The Poetry Meter Maid Works the Night Shift
Misfortune Cookies
Tolstoy’s Hands
Poet Lariats
On the Question of the Cultural Significance of Miniature Mannequins in a Postmodern World
Language Burier
The Death of Poetry.

I selected two poems from Pat’s collection to post today not just because they are two of my favorite poems in the book--but because the first poem speaks to the heart of poetry and the second to the essence of writing well.

the tunnel at the end of the light.

an anagram for “Yo esprit!”
commotion in the left field stanzas.
the great flywheel of metaphor.
prose, bent out of shape.
the idiom of the djinns.
experience’s armor against oblivion.
the midwife at the birth of the alphabet.
verbs hunting for lonely nouns.
an antidote for adjectivitis.
words on a busman’s holiday.
a greased pole to the castle in the air.
the sound of silence … amplified.


“The Adjective is enemy of the Noun,”
Which manages precision on its own.
The English language wears a royal crown
Only when Colonel Verb ascends the throne.
“To be” or not “To be”? The answers clear.
“Is/are/was/were and would have been” are very
Inimical to melody. The ear
That craves Mozart gets too much Salieri.
A French provincial woman made Flaubert
Distraught for weeks: He searched for that bon mot—
A Verb!—personifying her affair.
So if you contemplate striking a blow
For elegance in style, do not disturb
The Adjective. It’s dead. Long live the Verb!

NOTE: Those of you who enjoyed Pat’s children’s book Spot the Plot: A Riddle Book of Book Riddles will be happy to know that Pat included several “Mini-Book Reviews” of adult novels in Gulls Hold Up the Sky.

Here’s one of them: 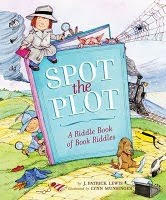 If you enjoyed Moby Dick, you’re sure to chuckle when you read The Scarlet Letter, Crime and Punishment, The Great Gatsby, and Pat's other mini-book reviews.

Read more poems from Gulls Hold Up the Sky:

Gulls Hold Up the Sky

How the Book of Baseball Was Written

A Short Q&A with J.Patrick Lewis

Elaine: What inspired you to write your first mini-book review?

Pat: The mini-review of Moby Dick may have been the first, but that encouraged me to tackle other classics. I love parody in all its forms, so perhaps that was the inspiration. I was trying to out-Cliff Cliff Notes!

Elaine: When did you begin writing your mini-book reviews in verse?

Pat: I can't say when I wrote the mini-book reviews but it's been some years ago. They were all first published in Light Quarterly, the only journal devoted exclusively to light verse in the U.S.

Elaine: Did you write adult poetry before you began writing poetry for children?

Pat: Yes, I published about 80 adult poems in literary journals and small magazines before I even thought of writing for children. The hope was that I could get a collection of adult poems published, but that is more difficult by far than getting a book of children's verse published.

Elaine: Who are your favorite writers of light verse?

Elaine: Who are your favorite writers of serious poetry?

You can read the rest of my J. Patrick Lewis posts here.

From GottaBook: J. Patrick Lewis—The Poet of the World

The Wild Rose Reader Poetry Prize for the third week of National Poetry Month will be The Underwaer Salesman and Other Jobs for Better or Verse—which was written by J. Patrick Lewis and illustrated by Serge Bloch! 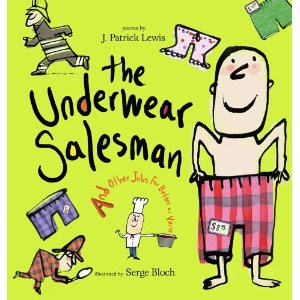 At Political Verses, I have a song parody about the Fed bailout for the wealthy titled Guess Where Our Money Goes?

At Blue Rose Girls, I have an original memoir poem titled Crocheting.

Diane has the Poetry Friday Roundup at Random Noodling.

Posted by Elaine Magliaro at 10:58 AM

Thanks for featuring Gulls Hold Up the Sky. I've been anxious to get my hands on a copy and it's such a treat reading two sample poems here. I'm quite intrigued by "Misfortune Cookies." :)

There is such a great variety and wealth of poetry in "Gulls Hold Up the Sky." I loved Pat's light verse in this book.

"The midwife at the birth of the alphabet": LOVE it! Thanks for alerting us to this very special collection, Elaine!

Thank you, Elaine, for shining a spotlight on one of Poetry's treasures -- JPL!!!