WORLD MAKE WAY: An Anthology of Poetry about Art from the Metropolitan Museum 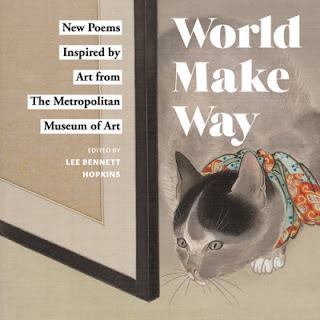 ABOUT THE BOOK
“Painting is poetry that is seen rather than felt, and poetry is painting that is felt rather than seen.” —Leonardo da Vinci
Based on this simple statement by Leonardo, 18 poets have written new poems inspired by some of the most popular works in the collection of The Metropolitan Museum. The collection represents a wide range of poets and artists, including acclaimed children’s poets Marilyn Singer, Alma Flor Alda, and Carole Boston Weatherford and popular artists such as Mary Cassatt, Fernando Botero, Winslow Homer, and Utagawa Hiroshige.
Accompanying the artwork and specially commissioned poems is an introduction, biographies of each poet and artist, and an index.

NOTE
I am thrilled to tell you that I have a poem included in this beautiful anthology, which was edited by Lee Bennett Hopkins! I wrote it about a painting of a horse (Night-Shining White) done by Han Gan who lived in China in the 8th century. I got the inspiration for my poem by reading the following information about the painting provided by the Metropolitan Museum of Art:

A leading horse painter of the Tang dynasty, Han Gan was known for capturing not only the likeness of a horse but also its spirit. This painting, the most famous work attributed to the artist, is a portrait of a charger of Emperor Xuanzong (r. 712–56). With its burning eye, flaring nostrils, and dancing hoofs, the fiery-tempered horse epitomizes Chinese myths about Central Asian "celestial steeds" that "sweated blood" and were actually dragons in disguise. The seals and inscriptions added to the painting and its borders by later owners and appreciators are a distinctive feature of Chinese collecting and connoisseurship. The addition of more than one thousand years of seals and comments offers a vivid testimony of the work's transmission and its impact on later generations. 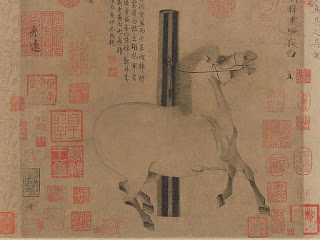 best of my breed.

I am a dragon

flashing fire through my eyes.

My sweat is blood-red.

The mane on my head

stands stiff as a crown.

I prance through a town,

my emperor astride me.

How he loves to ride me—

as my hooves stomp the ground.

I race into battle—

I don’t fear a fight.

I am daring and brave.