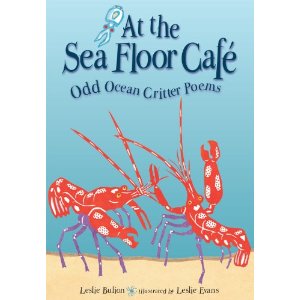 At the Sea Floor Café: Odd Ocean Critter Poems
Written by Leslie Bulion
Illustrated by Leslie Evans
Peachtree, 2011
Leslie Bulion, author of Hey There, Stinkbug!, has a new poetry collection out this year. This time her focus is on a number of “odd critters” that live in the ocean. The aquatic animals she writes about include snapping shrimp, the convict fish, sea spiders, narwhals, krill, and the violet snail.
I asked Leslie if she could provide me with some background information about her new poetry collection. Here’s what she wrote:
My first collection of science poems, Hey There, Stink Bug!, was inspired by a week-long entomology summer course I attended. I've always written poetry, and I've always been interested in science. When I learned about how bugs are these perfect (and in many cases, perfectly diabolical) little packages of evolutionary survival, it occurred to me that poems are perfect little packages, too, with a parallel economy of purpose and expression. So I decided to put the two together. I put myself through an independent poetry study, and then researched insects that were what I consider "juicy science stories". I enjoyed the process so much, that while I was working on Stink Bug I was already filing away information for my next poetry collection.
I have a master's degree in oceanography, so At the Sea Floor Cafe was the natural next. So much of the ocean environment is unexplored; scientists are making exciting new discoveries every day. I love to read about newly identified critters and new ideas in marine animal ecology and behavior, both in the popular press and in the science journals. In preparation for writing these poems, I amassed a collection of poem topic ideas, from shallow to deep water species, and across the major classes of marine organisms. I started to think about which kind of poetry form might work with which marine creature, and studied poetry forms I hadn't worked with yet to see which ones might be fun to try. So much of this book--as is true with many--is research. Of course, each poem went through many versions, revisions, and tweaks, too--right up until the illustrated manuscript was sent off to the printer!
What were some of the poetic forms that Leslie used when she wrote her “critter” poems? Double dactyl, kyrielle, haiku, cinquain, limerick, triolet, and epigram. Her poem The Leopard Sea Cucumber and the Emperor Shrimp was written for two voices and Upside Down and All Around, her poem about the violet snail, was written in the shape of a snail shell.
Leslie invites readers of At the Sea Floor Café to join in an exploration of the watery world with the first poem, Dive In!
Here’s how it begins:
Let’s visit a habitat shallow and deep,
And boiling hot, where acids seep,
And frigid and pressured and mountainy-steep,
Come explore the sea!
It ends like this:
The ocean is planet Earth’s main attraction,
Yet humans have fathomed the tiniest fraction,
Now we go deeper into the action—
Dive in and see the sea!
The titles of several poems in this collection really piqued my curiosity: Walk Like a Nut (coconut octopus), Hidden in Plain Sight (sea spiders), With Her Eggs Tucked Underneath Her Arms (broody squid), Jellyfishing (siphonophores), and The Invasion of the Bone Eaters (Osedax worms).
The author includes informational prose about the ocean critters along with her poems. Both poems and prose provide readers with interesting factual tidbits about the creatures. We learn about the coconut octopus’s strange way of walking that makes it look like a coconut drifting across a shallow sea—and about the female broody squid who cradles a clutch of two to three thousand of her eggs in a billowing sac between her arms until they hatch.
Party Poppers, the second poem in the book, is a double dactyl. It’s one of my favorites—and a poem that kids are sure to enjoy.
Party Poppers
Bubbledee troubledee
Sponge-dwelling social shrimp
Clack one big claw to make
Trespassers stop.
Causing explosions
Crustaceanologically,
Filling the ocean with
Snap crackle POP!
The “party poppers” are actually shrimp that live in warm water. They can clack the bigger of their two front claws together so fast that they shoot out a jet of water that forms an underwater bubble. Leslie goes on to explain: “The bubble collapses with a snap! Predators that come too close can be injured by shock waves. Prey, such as marine worms and small fish, can be stunned or even killed.”
I’d say that’s pretty interesting stuff!
The back matter of At the Sea Floor Café includes a glossary which explains terms like bioluminescent, detritus, marine snow, zooid, and sea snot that most children—and many adults—may not be familiar with. It also includes a Poetry Notes section that provides information about the different poetic forms that readers will find in the book.
The hand-colored linoleum block prints done by Leslie Evans are set against blue and blue-green backgrounds. The illustrations add touches of color and complement the text without distracting from it. 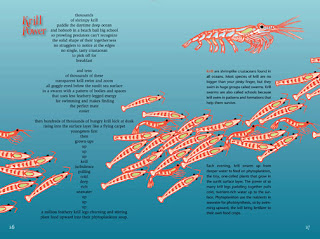 Click here to see two more of the two-page spreads from the book.
At the Sea Floor Café Book Trailer:
Posted by Elaine Magliaro at 12:28 PM

I love this! Can't wait to find the book.