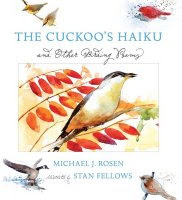 The Cuckoo’s Haiku is truly one of the finest books of haiku for children that I have ever read. It’s a wonderful amalgam of lovely haiku about birds, exquisite realistic watercolor paintings showing the different birds in their natural settings, and factual information about the avian creatures in the back matter of the book.

Here’s a haiku about the Black-billed Cuckoo from the book:

the cuckoo’s haiku
hidden like the chance of rain
its name, repeating

There’s no point in my writing a more extensive review of this book because Jules of 7-Imp has already written the definitive post about it. Her review includes lots of background information from the author—as well as some of the book’s beautiful illustrations. Here’s the link: Poetry Friday and Michael J. Rosen: Haiku is for the Birds. 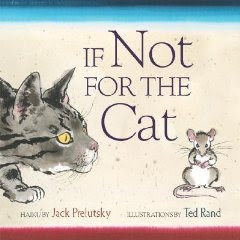 If Not for the Cat
Written by Jack Prelutsky
Illustrated by Ted Rand
Greenwillow, 2004

If Not for the Cat is definitely a great departure from the books of rhythmic, rhyming, humorous poems for which Jack Prelutsky has become so famous. Prelutsky proves himself adept at penning this traditional form of Japanese poetry. He writes his haiku about a variety of animals—including jellyfish, a sea otter, a rattlesnake, ants, and a kangaroo. I should note that these seventeen poems do not adhere to all of the essential elements one would expect to find in the classical form of haiku. There are no “season” words. Another thing: Prelutsky’s haiku could also be considered “mask” poems because the animals speak out to us from the pages of this beautifully illustrated picture book in their own voices.

Here is a haiku told in the voice of a hummingbird:

I, the hoverer,
Sip the nasturtium’s nectar
And sing with my wings.

Here’s a link to another poem from the book.

Ted Rand’s spare, elegant illustrations are the perfect complement for the haiku poems in this book. This is a truly lovely collection of pictures and poetry!

You can read a brief description of If Not for the Cat at this link: Horn Book Fanfare—Best Books of 2004. 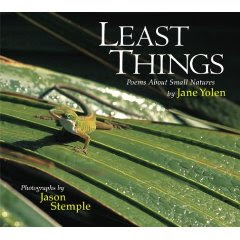 Least Things: Poems About Small Natures
Written by Jane Yolen
Photographs by Jason Stemple
Wordsong/Boyds Mills Press, 2003
Least Things is a book of fourteen haiku about smaller creatures with whom most of us are familiar—snail, crab, caterpillar, butterfly, chipmunk, grasshopper, squirrel, dragonfly, spider, lizard, hummingbird, turtle, tree frog—and a human baby. Yolen writes her poems using the traditional 5/7/5 syllabic format. Close-up photographs of the “least things” showing them in their natural habitats serve as the backdrops for the poems, which--like the haiku in If Not for the Cat—are written in the voices of the different creatures.

A quick sideways glance,
A brief soft-shoe over sand.
I scuttle away.

Each two-page spread in the book includes a haiku and a small bit of factual information about the animal written about in the poem. Yolen wrote the poems for her son Jason’s photographs. There is, therefore, a true marriage of text and illustration. This is a good book to include in a classroom library collection.

Classroom Connection
An elementary teacher could use Least Things as a springboard for a creative writing/cross curricular activity in the classroom. It might be fun for a teacher to gather some color photographs of insects and other small animals and have students write haiku about them. Children could also do a little research and write short paragraphs of information about the animals--just as Yolen did in her book. The students could then illustrate their poems. The photographs, drawings, haiku, and informational paragraphs could be mounted on construction paper and posted on a bulletin board. Wouldn't that make for a wonderful display of student writing and artwork? 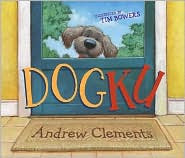 Dogku is certainly not your typical book of haiku for children. Told through a series of seventeen haiku, this is a light-hearted tale of a stray dog that appears at the door of a family with three children one day. The children name the dog Mooch before they head off for school that morning. While the children are away, Mooch has some adventures and gets into some mischief. He goes for a ride in the car with the window open; he rolls around in the trash; he chews on dirty socks he finds in the laundry basket; and he takes a nap outside on the stoop.

Later that day, a decision must be made by the parents. Will they agree to keep the stray as a family pet—or will they take him to the pound? What will happen? Fortunately for Mooch and the three children, the homeless dog finds a home. Young readers are sure to enjoy this doggy tale with a happy ending.

A new doggy bed!
Food, a bowl, a squeaky toy!
Mooch has found his home.

Tim Bowers' illustrations done in oil paint add to the charm and levity of this endearing haiku story.

We have all these books in our library and I love recommending them to teachers doing poetry and/or haiku in the classroom. Delightful! Thanks for posting about all of them.

I was going to write up an extended post about all my haiku books that are still in print--but I just didn't have time. So...I thought I'd just focus on the animal theme.

I have If Not for The Cat and Dogku. They show kids you don't need to use a lot of words to get your meaning across. I haven't read either of the other two yet, but both are on my wish list. That wish list just keeps growing!

THE CUCKOO'S HAIKU is a gorgeous book. I know you'll want to add it to your collection. It's a poetry book for all ages. I think LEAST THINGS would be a great haiku book to have on hand in the classroom.

What a great topic for a round-up! Thanks for the titles...

All these books look very interesting -- especially the ones featuring "atypical" haiku, from Prelutsky and the Dogku book. I've been drooling over the Michael Rosen book ever since I read Jules' post.

You have all of my favorites. I just read If Not for the Cat to classes yesterday. I great book to use with kids for illustrating what they already know to help them understand what they are reading. Great. Fun!

I can't wait to get my hands on The Cuckoo’s Haiku and Other Birding Poems. It looks fabulous! Thanks for sharing this list. I still haven't seen Dogku, though I've heard lots about it. How can that be?

I own Least Things. Love it! I also enjoy The Cuckoo's Haiku. Thank you for the other recommendations. I know I will love the Dogku!!!!

My daughter saw the dogku review and has asked me to get it for her, i hope it has a happy ending.

Generic Viagra (sildenafil citrate; brand names include: Aphrodil / Edegra / Erasmo / Penegra / Revatio / Supra / Zwagra) is an effective treatment for erectile dysfunction regardless of the cause or duration of the problem or the age of the patient.
Sildenafil Citrate is the active ingredient used to treat erectile dysfunction (impotence) in men. It can help men who have erectile dysfunction get and sustain an erection when they are sexually excited.
Generic Viagra is manufactured in accordance with World Health Organization standards and guidelines (WHO-GMP). Also you can find on our sites.
Generic Viagra is made with thorough reverse engineering for the sildenafil citrate molecule - a totally different process of making sildenafil and its reaction. That is why it takes effect in 15 minutes compared to other drugs which take 30-40 minutes to take effect.
[b][/b]
Even in the most sexually liberated and self-satisfied of nations, many people still yearn to burn more, to feel ready for bedding no matter what the clock says and to desire their partner of 23 years as much as they did when their love was brand new.
The market is saturated with books on how to revive a flagging libido or spice up monotonous sex, and sex therapists say “lack of desire” is one of the most common complaints they hear from patients, particularly women.

I love when I have the opportunity to read blogs as interesting as this. really thanks and congratulations. Costa Rica Cheap Land for Sale