A Personal Tale about Poetry & A Poem

Last spring, I was sitting with Grace Lin and Janet Wong at Grace’s condo one afternoon talking about poetry. Both ladies had asked me to bring along some of the poetry collections that I was writing/had completed. They planned to read my work and give me advice. One of the collections we spent most of the time discussing was the one with animal mask poems that I had been working on for a few years. They liked the poems—but felt that maybe the concept wasn’t fresh enough. Then, Janet and Grace got an idea when they read the pterodactyl poem. They thought that maybe THAT poem could be the springboard for a book about fossils and extinct animals.
Here's a picture of me with my trusted advisers--Janet and Grace: 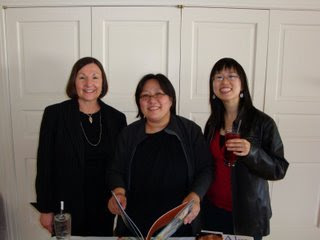 We brainstormed ideas and subjects for poems. I took notes and made a list. I went home that day and got to work. I pulled all the nonfiction books I had about dinosaurs off my library shelves. I did research on the Internet. I bought a bunch of books about prehistoric animals. I put my nose to the grindstone. The great thing about working on this “new” project is how much I’ve learned.

Here’s something interesting: After I had completed over a dozen poems for this collection, I sent them off via email to Grace and Janet for their feedback. One of the two poems that Janet thought wasn’t as strong as the others in the manuscript was the pterodactyl poem that had been the seed for the whole concept for the collection. I think that's pretty funny. So...I'm eliminating that poem from the collection--but I'll post it here for you.

I’m pterodactyl. I’m extinct.
I’m just a fossil now…
A relic of Earth’s ancient past.
I wish that I knew how
To break these rocky bonds
Which keep me trapped in days of yore
So I can flap my stony wings
And fly again once more.
One of the poems I did decide to include in the collection is T. Rex: A Glutton for Punishment, which I wrote about twenty years ago. I made a few changes to it. (I posted the poem without the changes at Blue Rose Girls previously.) Here it is:

T. Rex: A Glutton for Punishment

Oh! T. Rex was a greedy beast.
Each and every day he’d feast
On steamy stegosaurus stew,
Toasted pterodactyl, two
Tons of brontosaurus steak
And slurp up nearly half a lake
With all its prehistoric fishes—
Which he considered most delicious.
No vegetarian dinosaur,
He ate his brother’s posterior.
Digestive track on overload,
And belly bulging, T. Rex strode.
He searched the forest, thunder-toed,
For allosaurus a la mode
With heaps of whipped triceratopping,
Which he gobbled up. Then flopping
Down beneath a tree to rest,
Groaned and moaned and beat his chest.
He had to pause and take a break
Because he had a tummy ache.
NOTE: It is so wonderful having friends like Grace and Janet who are ALWAYS ready and willing to give me advice about my work when I ask for it. Thanks, ladies!!!
Posted by Elaine Magliaro at 9:25 AM

Dinosaur poems are very popular, and kids are always curious about extinct animals. I think you've hit on a winner!

You are very fotunate to have Janet and Grace in your corner. Can't wait to read more "extinct" poems!

I sure hope the idea is a winner. I haven't done much work on the collection in recent months. I had writer's block. It was awful not to be able to focus and be productive. Now I'm back in writing form again--so I hope to finish the collection in the next couple of months.

I like the T Rex. I have a soft spot for poems starting with "Oh!" Good luck with the writing!

Thanks, Charlotte! It's funny how I got back into the writing groove again after an extended dry spell. I was inspired to compose political rhyming rants about people like Tom DeLay and Rush Limbaugh after I saw them on TV last month. Now my writing juices are flowing again--and I'm so relieved.

The T-Rex poem is hilarious! "He ate his brother's posterior"? LOL!

The collection sounds very promising. Lucky you to have such great advisors. :)

I'm so glad you liked the part about T. Rex eating his brother's posterior. That was one of the changes I made to the poem.

I am indeed fortunate to have friends like Janet and Grace to give me advice.

Good ones, Elaine. I like the "fishes" and "delicious" rhyming. Very funny.

Thanks, Susan! Maybe I should have written fishes and delishes!