I enjoy reading light verse for children that is clever and full of wordplay. Two of my favorite children’s poets who excel at the genre are J. Patrick Lewis and Douglas Florian. I used to share their humorous poems with my elementary students who so enjoyed them that they would often memorize them—and sometimes even attempt modeling their own poems after classroom favorites written by these two poets.

While children’s books of light verse are popular with youngsters and many are being published today—it’s sad to say the same is not so true for light verse for adults. Such books are hard to come by. I am happy to say that there is a book of light verse by Richard Wilbur, a former US Poet Laureate, that is still in print: Opposites, More Opposites, and a Few Differences. It’s an enjoyable book to read. It provides good examples of how a poet can have fun with language by looking at words in new and unexpected ways. 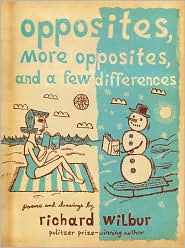 Classroom Connection
I think this poetry book could be used as a springboard for a language arts/writing exercise that would challenge students in a middle grade/middle school classroom to look at words—antonyms in particular—inventively. After a review lesson on antonyms with students, a teacher could work with them on compiling a list of pairs of word opposites. Then the teacher could share some of the “opposite” poems from Wilbur’s book. Next, she/he could then discuss with students the “not so typical” opposites written about in Wilbur’s humorous verses, for example:

The teacher could then lead the class in writing one or two "opposite" poems to model the process before sending students off to write their own poems.

What is the opposite of prince?
A frog must be the answer, since,
As all good fairy stories tell,
When some witch says a magic spell,
Causing the prince to be disguised
So that he won’t be recognized,
He always ends up green and sad
And sitting on a lily pad.

The opposite of duck is drake.
Remember that, for heaven’s sake!
One’s female, and the other’s male.
In writing to a drake, don’t fail
To start your letter off, “Dear Sir.”
“Dear Madam” is what ducks prefer.

In snowball fights, the opposite
Of duck, of course, is getting hit.

From A Few Differences (#1)

Dawn is a thing that poets write
Verses about till late at night.
At daybreak, when the poets’ eyes
Are closed in sleep, their neighbors rise
And put the coffee on to perk
And drink it, and go off to work.


You can read Some Opposites at the Poetry Foundation.

Here’s a YouTube video of Some Words Inside of Words:


The Richard Wilbur page at poets.org

The Richard Wilbur page at poetryfoundation.org

My Opposite Poems
I decided to try my hand at writing some “opposite” poems. It was fun!

The opposite of itch is scratch—
What canines do to an itchy patch
When fleas in flocks attack and bite ‘em.
That’s how doggies try to smite ‘em.

The opposite of king is queen,
His consort on the royal scene—
Or else it’s some poor serf or peasant
Whose endless workday seems incessant.

The opposite of engine? Trunk.
It has no parts that clank or clunk.
It’s a resting place for spare tires
And a body when your spouse expires.


The opposite of ladies? Witches—
Ugly hags with nostril twitches,
Cackling laughs, and warty faces...
Who are lacking in the social graces.

Write Your Own Opposite Poem
Maybe some of you would like to try writing some “opposite” poems of your own. If so, leave them in the comments or email them to me and I’ll post them some time during National Poetry Month.

P. S. Here's what I have over at Political Verses today: Bill O.: A Rhyming Rant about Bill O'Reilly

Posted by Elaine Magliaro at 9:15 AM

Elaine - Among my proudest possessions are signed copies of Wilbur's Opposites and More Opposites! Here is my attempt at an Opposites poem (I'm never sure the format will hold when lines wrap in the Comments box - but I'll give it a try):


The Opposite of Hot Dog

A hot dog’s opposite is prone
to play the alto saxophone
in night clubs— he’s a real cool cat.
It’s also, oddly, quite true that
the opposite of hot dog is,
on summer days, a sloe gin fizz,
which goes down smooth and unembellished,
not gobbled up on a bun with relish.
And if the fate of old hotdoggers
is telling tales and quaffing lagers,
could be their opposites are the nerds
who drink alone and play with words.
I think that does it for the frank,
whose furter stands alone. I thank
all vegetarians, at whose behest,
the opposite of bratwurst is best.

Thanks for leaving a poem. I love the hot dog & cool cat as a pair of opposites--as well as the others you've included in your poem. It's a delicious and clever light verse.

one fine day in the middle of the night, two dead men got up to fight, back to back they faced each other and drew their swords and shot one another.

not sure if i have actually made this one myself, i remember doing it in Primary School, and found it in one of my old books. I still find it quite funny and hope its not already out there!