When Janet Wong (Out and About with Janet Wong and Grace Lin) was in Massachusetts in late March, she told me she was going to be back in our area in mid April. We made plans for her to come to my house for Sunday brunch on April 15th. Forecasts had been brewing most of last week about a terrible Nor’easter that was going to hit New England on Sunday. Janet emailed me on Saturday to say she probably wasn’t going to drive up from New Jersey because of the impending storm. Not long after that email I got another one saying: “We’re coming!”

I am so glad she did. I love Janet! She is a dynamo…and such a personable individual…and she has a wonderful sense of humor…and she writes terrific books. I got a chance to meet her charming husband—and to introduce Janet to my charming husband, my funny, lovable daughter, and one of my three lovely nieces. The only disappointment was that Grace and Robert couldn’t make it.
I know I had promised lots of “foodie” pictures—but I was so busy enjoying my wonderful company and trying to be a good hostess that I decided not to interrupt the pleasant conversation with a photo-taking session. I did manage to take snap a picture of Janet with my daughter before she left. 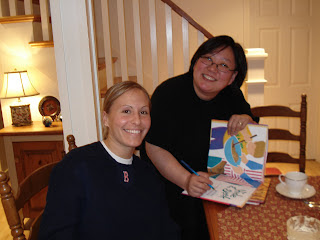 I didn’t get around to taking pictures of the food before we ate--but I took a couple of snapshots of some of the leftovers. For you "foodies" out in the kidlitosphere, here's the menu:

Combine the egg yolks, 4 tablespoons of sugar, and the wine in a large bowl. Place the bowl over a pan of gently boiling water. Whip with a hand held beater or whisk for 3 or 4 minutes—or until the mixture is tripled in volume, light and fluffy, and falls in a thick ribbon from the beater or whisk.

Have ready: A larger bowl with some ice and cold water in the bottom and the heavy cream and sugar, which have been whipped to stiff peaks. Cool the bowl of hot zabaglione in the bowl of ice and water. Then gently fold in the whipped cream. Cover and refrigerate. This recipe may be made up to 6 hours in advance of serving. Serve the cold zabaglione as is or spoon it over fresh berries for a light and delectable dessert.

If you try this recipe, let me know how it turns out. 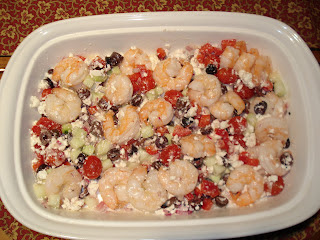 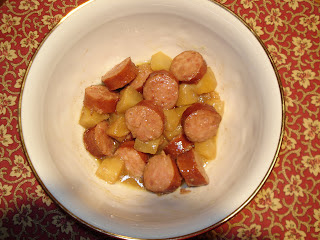 There aren't many photos of the food because we WOLFED it down! I had been thinking about Elaine's potato pancakes for a year before our brunch, thanks to her amazing powers of description--and I'm already ready for Potato Pancake Brunch #2, slated for May 2008.

You have 13 months to get yourself invited!!

We'll have a cooking class--and you're going to learn how to make potato pancakes! You can try whipping up a recipe for cold zabaglione, too!