Out and About with Janet Wong and Grace Lin 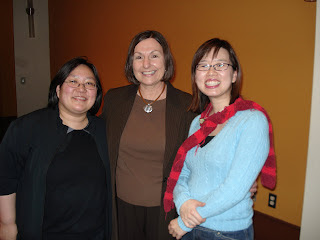 I had been looking forward to the week of March 25th. Janet Wong was going to be in Boston visiting schools, the Cambridge Public Library, and speaking at an event sponsored by The Foundation for Children’s Books at Boston College. Grace Lin, Janet, and I had made plans to have dinner together on Monday night at a wonderful restaurant called Oleana.

A couple of days before Janet was due to arrive Grace emailed me to inquire about who was going to drive to the restaurant. She was concerned because it’s so hard to find parking in the area…and, she said, “I can’t parallel park.” Well, that’s something Grace and I have in common. I wrote back to her saying I could pick her up and drop her off—then drive around for a few hours until I could find a double space so I could pull in forward. Go figure…I have been driving for more than forty years and still haven’t mastered the art of parallel parking.

Not to worry, Janet drove…and even though she has a large car, she parked it in a small space with ease. Janet Wong is my idol: a great children’s poet who can parallel park!!! I am in awe of her poetic and vehicular abilities.

We had a delightful dinner together. Janet and I, who are both more than a tad loquacious, kept jabbering away. Poor Grace barely slipped a few sentences into the conversation. 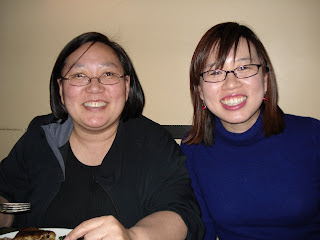 The food was delicious. I took just one “foodie photo” of the scrumptious Baked Alaska dessert. The meringue was like a silky, sweet cloud browned to perfection. Grace got it right when she said the meringue tasted like a toasted marshmallow. Yum! Sweet tooth alert: I’d go back just for the dessert. 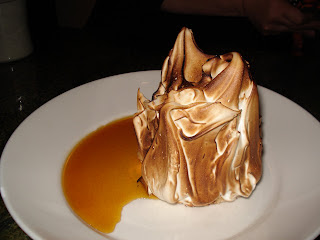 Grace also wrote about our dinner out with Janet at Pacyforest, her personal blog.
Tuesday, March 27th

Grace and I went to Boston College to hear Janet speak. We sat with fellow Blue Rose Girl Anna Alter and Mary Newell DePalma, another talented children’s author and illustrator. 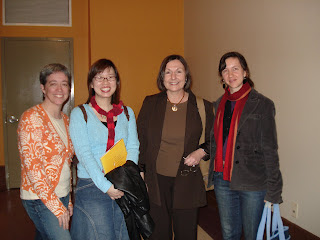 Mary Newell DePalma, Grace, Elaine, and Anna
Janet had a great interview with Patricia Keogh of The Foundation for Children’s Books. Janet was herself—open, honest, funny, ebullient…and sincere. We really enjoyed her presentation. 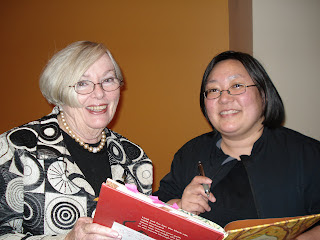 Then Janet, Grace, and I (the chauffeur) had a l-o-o-o-n-n-n-g drive back to the Inn at Harvard in Cambridge where Janet was staying. The drive was long in regard to time…not distance. We didn’t have to traverse miles and miles of roads in and around the Athens of America. You see, Grace and I have something else in common: no sense of direction. We get lost easily...and often. Lewis and Clark would have dumped us in a trice and never have given it a second thought. No one would ever nominate either Grace or me for a “Henry the Navigator” Award!


The Return of the Potato Chip Poet 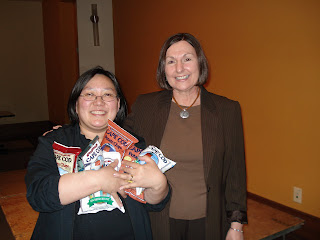 Good News: Janet is returning to Massachusetts in mid April. And the “spud lovin’ poet” is coming to my house for my homemade potato pancakes…and other specialties! Grace and I will try to take lots of photos for all you foodies out there in the kidlitosphere.

Posted by Elaine Magliaro at 1:20 AM

What a treat to read about our "out-and-about" adventures!

Really, we didn't get too lost...it shouldn't mean anything that I started wondering where Saskatchewan is on the drive back to (or above or around or beyond) Cambridge.

Andrew could not believe it when I read him the part about my expert parallel parking, since he is always complaining about how lousy I am at parking! Well: if it's on Wild Rose Reader, it MUST be true, right? (if only we had video to prove it!)

Thanks for leaving a comment. I can't wait for your return to the Bay State. I'm looking forward to our Sunday brunch. Maybe I'll even dust and vacuum. Tell Andrew I wish him luck in his fencing competition!