Today my acrostic poem is for Jules and Eisha, the dynamic duo of the 7-Imp blog. The ladies give us book reviews for people of all ages, interviews, Poetry Friday posts, and their very popular 7–Imp's 7 Kicks weekend feature. Seven Impossible Things is one fine kidlit blog.

For Jules and Eisha, I’ve chosen a poem from WHAT’S IN A WORD, a collection of acrostics I finished work on last fall. Since the ladies of 7-Imp are such good friends, I thought the following selection would be most appropriate. We all know how close chums share secrets with each other.


Words
Hushed
In soft velvet
Sounds
Patter into your
Ear
Revealing deep secrets that no one
Should hear.


For years, I hadn’t been a big fan of acrostic poems. So many of the ones I’d read, written by both adults and children, seemed too prosaic. Few were lyrical in nature; few had figurative language; and few had any rhythm—which, to me, is a poetic requirement. But I changed my mind about acrostics when I read SILVER SEEDS: A BOOK OF NATURE POEMS. Written by Paul Paolilli and Dan Brewer and illustrated by Steve Johnson and Lou Fancher, SILVER SEEDS is the best book of acrostic poems for children that I have read. This collection of fifteen poems takes readers through one day. It opens with a poem about Dawn and closes with a poem about Night. It includes other poems about a shadow, a hummingbird, a butterfly, trees, clouds, stars and the moon.

In this book, a falling leaf is a loose brown parachute, fog comes in folds and folds of spun sugar, the moon is a marvelous melon, trees tickle the sky with tiny hands, and stars are silver seeds that sprout wonder. The spare illustrations serve as a quiet backdrop for the poems and allow them to stand out on the page. Each acrostic is printed in large text and has its own two-page spread. This is an excellent feature because a teacher can show students the poems as she/he reads them aloud. In this way, children can easily grasp the concept of what an acrostic poem is as they listen to their teacher read and look at the book.

Share SILVER SEEDS with your students. If they have been immersed in lots of fine poetry with rhythm, imagery, and figurative language—they should have the tools to write acrostics that are “true” poems that will sing on the page.

Note: Whenever my students typed the final drafts of poems they had created for a particular lesson/class unit, I photocopied them and compiled them in an anthology. Each child got his/her own copy of the anthology for which they designed a front and back cover. I laminated the covers and bound the anthologies on spiral binders. My students absolutely loved seeing their own poems collected in a book, which they got to take home and share with their parents and siblings.


Here are acrostic poems that were written by two of my second grade students the last year I taught in an elementary classroom. Both poems won prizes in the 2000 Massachusetts Science Poetry Contest.

Solar flares blast into space,
Untamed explosions of fire, in
Neverending galaxies where
Stars are born and reborn.

Stars, jewels of light sparkle in the night.
Pluto, cold as an icy night, as dark as pitch, freezes in space.
Asteroids, worlds of rock and metal, play ring around the sun.
Comets of ice with fiery tails glow in the darkness.
Elegant Earth, a world of sapphire blue and green, spins around the sun.

Stephen Schnur has written four books of seasonal acrostic poems—which also happen to be alphabet books. Leslie Evans did the artwork for all four books. The illustrations, executed in hand-colored linoleum cut blocks, are colorful and striking. The text for each poem, set inside a white box framed in black, is large and easy to read. The books were published by Clarion. 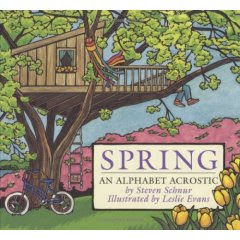 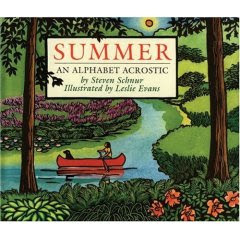 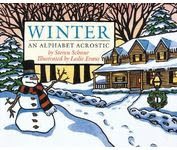 Here is one sample of Schnur’s poetry from his book WINTER:

Flakes so
Light they drift
Upward
Rise like smoke before coming to
Rest in the
Yard.
Posted by Elaine Magliaro at 1:55 AM

Aw, Elaine! You total sweetie! I love that poem! Thanks so much.

I love it, too. Thanks for the dedication! I'm just now getting to it today. You made my day.

Thank YOU for all the nice things you said about me and my Blue Rose Girls poetry posts in my interview at 7-Imp.

This is one of my favorite acrostics thus far. I'm glad that you pointed out that the vertical word in acrostics should in essence be the backbone of the poem, and not the poem itself. I'm going to check out Silver Seeds.

I wanted to thank you for highlighting my book Silver Seeds in your article. It was a joy to write and I am glad to see others interested in the acrostic form.