My poem today—a cinquain—is for Sylvia Vardell of Poetry for Children. Sylvia served with me on the Cybils poetry-nominating panel. She was also the co-chair of the 2006 Selection Committee for the NCTE Award for Excellence in Poetry for Children. Sylvia usually posts at her blog once a week—but she’s been posting every day during National Poetry Month. You may want to stop by for a visit.

The following poem is my first attempt at writing a cinquain. It is not one of my old moldering poems. I wrote this one several months ago for a collection entitled TASTING THE SUN that I began work on about twenty years ago.


ABOUT THE CINQUAIN
The cinquain is a poetic form that was developed by a woman named Adelaide Crapsey (1878-1914). Most teachers know a bastardized form of the cinquain that is often taught in language arts classes. The true cinquain is a five-line poem of twenty-two syllables that does not rhyme. Visit Cinquain.org to read twenty-eight cinquains written by Adelaide Crapsey.

Award-winning poet and anthologist Myra Cohn Livingston was a master of this poetic form. Alice Schertle and Kristine O’Connell George are two other children’s poets who have written some excellent cinquains.


Here are the titles of poetry books in which you can find some fine examples of “true” cinquains: 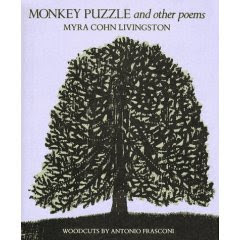 Posted by Elaine Magliaro at 1:35 AM

Elaine,
I'm touched and honored. Thanks so much for the poem AND the plug. I admire all YOU do for poetry for children.
Sylvia

I love cinquains. And the life history of the woman who invented them is fascinating, if you ever have time to look into it. She was quite an independent thinker, but developed tuberculosis.

I am really looking forward to reading all your poetry posts this month. Thanks for having a blog committed to a genre that doesn't receive the attention or respect that it deserves. That's why I'm glad so many bloggers in the kidlitosphere participate in Poetry Friday.

I like "true" cinquains, too. I read about Adelaide Crapsey when I was looking for websites with her poetry the other day. It's too bad that she died at such a young age.
Do you know of any other poets who have written cinquains for adults?

Finally got my rear over here...

These poems are great... I will add your Blog to my Blog Roll soon!

You're now on my Blog Roll... And I'm loving all your poems !

Thanks, Michele! I just hope I don't run out of poetic steam before the end of the month. May my muses be with me!

I pray thy Muses will look upon thee with favour...

(Hmm, it may just be possible to read TOO much Shakespeare in one day ! *grins*)