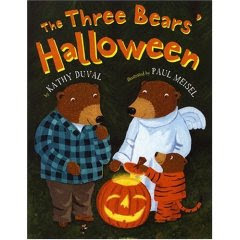 THE THREE BEARS’ HALLOWEEN
Written by Kathy Duval
Illustrated by Paul Meisel
Holiday House, 2007
The Three Bears’ Halloween is a great new book to read aloud to very young children at this time of the year. It’s not too spooky—but it provides the right amount of Halloween atmosphere for little listeners.

The story begins as Papa, Mama, and Baby Bear are putting on their Halloween costumes. Then off they go into the night. Baby Bear can’t wait to start trick-or-treating. Boo! He yells down into a hole—and a squirrel gives him nuts. Boo! Boo! He shouts into a bush—and bees give him some honey. Boo! Boo! Boo! He calls up into a tree—and birds drop berries into his bag. Baby Bear thinks he’s pretty scary stuff!

Next, the three bears come upon a house that looks mighty spooky. There are gravestones lining the walk to the front stairs. There are cobwebs and bats hanging from the roof of the porch. Shutters hang askew. A skeleton is stationed at the door. And what’s that poking out from a small evergreen tree that the bears don’t see? A black peaked hat! Whose could it be???

Baby Bear knocks on the front door and cries, “Trick or treat!” The door CREEEAKS open. Just as the three bears enter the house, they hear someone laughing loudly: TEE-HEE-HEE! Who could it be?

Once inside the kitchen the bears find three yummy popcorn spiders. Papa and Mama nibble on the licorice legs. Baby Bear wolfs down a whole tasty arachnid! TEE-HEE-HEE! They hear that laugh again and spy someone peeking in the window—“someone with a scary broom!” The bears are frightened. They run into the living room to hide behind a sofa. Baby trips over a chair and breaks “it to bits.”

The door CREEEAKS open again. The bears see the shadow of someone entering the kitchen...and it looks like someone “with a big, scary nose.” The bears head upstairs, jump into bed, and pull the covers over their heads.
TEE-HEE-HEE! Someone is creeping up the stairs after them! Baby Bear peeks out from under the covers and sees a BIG, BAD WITCH!!! Yikes! The three bears leap out of bed, scurry down the stairs, and run out the door. The last illustration shows the bears hurrying out through the gate. In the foreground, we see a young girl with golden hair who's pulled off her peaked hat and long green nose. She's smiling and wishing the hairy intruders a Happy Halloween!!! Who could she be?

Duval’s brief text, which echoes the tale of Goldilocks and the Three Bears, should be familiar to many young children. The author adheres to the traditional sets of threes often found in folktales: each of the three bears dons a costume; Baby Bear trick-or-treats at three different places; the bears eat food, break a chair, and jump into bed in someone else’s house. This book has a fine format for a picture book for little listeners.

Meisel’s art is an excellent complement for this not-too-scary Halloween tale. The bears don’t look ferocious, the illustrations aren’t too dark—and although the pictures are uncluttered, some include droll little details--like the squirrel dressed up in a Superman costume, a little mouse wearing clothes that appears to be following the bears, and three stuffed bears displayed on the bedroom bureau.

I highly recommend adding The Three Bears’ Halloween to a list of books suggested for reading aloud to children in preschool and kindergarten at Halloween.