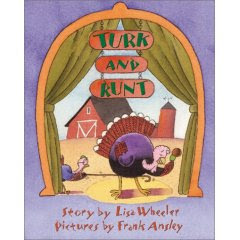 Looking for a Thanksgiving story that will get young kids laughing? Consider Turk and Runt. It’s a slyly humorous tale about two turkey brothers named Turk and Runt. The boys’ parents are extremely proud of their son Turk. He’s “the biggest, strongest, and most graceful bird on Wishbone Farm.” He’s a dancer and an athlete! What turkey parents wouldn’t puff out their chest feathers if they had a progeny like that? Turk’s parents are sure he’s going to go far in life. Bespectacled little Runt, however, knows exactly where Turk’s headed—not to fame and fortune, but to somebody’s house where he’ll be roasted and basted. Runt’s parents won’t listen to his warnings. They’re too wrapped up in their ambitious dreams for Turk.

Two days before Thanksgiving the famous ballet instructor Madame Waddelle arrives at the farm. “An audition!” squeals Turk’s mother. “Go out there and shake those tail feathers!” she tells her son. Turk leaps and spins…twirls and whirls. What a performance! The dance teacher is mighty impressed—especially with the size of Turk’s drumsticks.

Realizing that he’ll have to be the one to save his brother, Runt puffs out his feathers, throws himself to the ground, flaps and flops, hisses and sputters, gobbles like a maniac, and nearly scares the leggings off of Madame Waddelle. She runs away screaming: “Zees birds are crazy!”

But Turk’s not safe yet. The next day Coach Giblet arrives to select his Thanksgiving fowl. Turk’s father tells him to display his football prowess. Turk bobs and weaves, tackles and dives. He mows down every turkey in his path. The coach is in awe of this athletic bird. That’s when Runt comes to the rescue again. He cries and coughs and wheezes—he sniffles and sneezes and falls to the ground, hacking and quivering. “Good gravy!” shouts the coach sure that the turkeys are ill. He heads for the hills.

Runt’s parents are sad. Will their dreams for Turk’s bright future be realized? Maybe. When they see a little old lady driving onto the farm on Thanksgiving morning, they’re hopes are rejuvenated. They encourage Turk: “Show her what you’ve got!” But the elderly female isn’t interested in the robust Turk. She’s looking for a fowl of smaller stature—and Runt seems to be just the right size. His parents can’t believe it!

Knowing what the old lady has in store for him, Runt is on the run! That’s when Turk comes to his rescue. He uses the ballet moves and football maneuvers he’s perfected to help his puny sibling. When Runt gobbles like a maniac and Turk tackles her, the woman is finally frightened off.

Later that day, the thankful turkey family enjoys a feast of corn and alfalfa. But their happiness is shattered when Runt warns them that they’re not out of the woods yet. “Come December, folks begin planning their holiday dinners.” Readers have no need to worry about the fate of this fine fowl family. Runt’s got a plan—and you can be sure that this time everyone listens to him.


Click here to view three illustrations from Turk and Runt.