Today is the First Bloggiversary of The Miss Rumphius Effect. I thought I would celebrate Tricia Stohr-Hunt’s special “blogday” by posting a poem that I wrote in the autumn of 1994 when I was traveling in the People’s Republic of China with a Children’s Literature and Language Arts Delegation led by Professor William Teale. Not so long ago Tricia traveled to China herself—so I thought this poem would be fitting.

A Little Background
My delegation arrived in Beijing on October 24, 1994. We were met at the airport by a tall, handsome young man named Lee Jian-Xin (Mr. Lee). He was to be our national guide. (We also had local guides in the cities we visited.) Mr. Lee was really knowledgeable and had a wonderful sense of humor. We were all smitten!

There I was traveling around Beijing, Nanjing, Suzhou, and Shanghai with Mr. Lee and other teachers, librarians, and professors. We visited schools and universities and children's book publishers. We had roundtable discussions with teachers and professors and authors and illustrators about children’s literature! It was like a dream come true for me! I had the time of my life on that trip.

Mr. Lee told us that the Chinese call autumn the golden season. That inspired me to write a poem, which I dedicated to Mr. Lee before we left on our return trip to the United States.

Today I dedicate my poem to Tricia.
In the Golden Season
by Elaine Magliaro

When autumn comes
The cricket strums
A wishful song—
The echo of a summer gone,
Warm memories to
Dream upon. 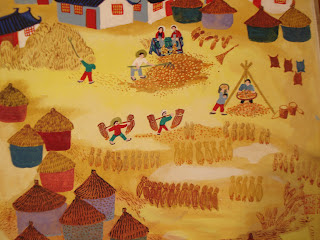 This is a picture of a piece of Chinese folk art I bought when I was in Shanghai.

Happy Blogday to you, Tricia!!!

Posted by Elaine Magliaro at 11:10 AM

Sniff, sniff. The poem is lovely. I'm so honored your honoring me! Thank you, Elaine.

That's one milestone you've passed. May you have many more happy blogdays in the future. The Miss Rumphius Effect is a great blog.