I love nursery rhyme parodies! I enjoy reading and writing them.
Here are brief reviews of two collections of nursery rhyme takeoffs for children. 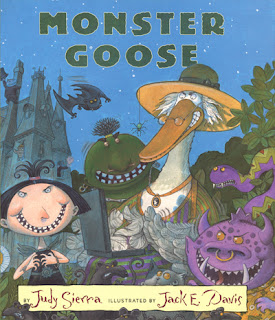 ﻿
First there was Monster Goose, a collection of rollicking fractured nursery rhymes with poetic parodies written by Judy Sierra and madcap cartoonlike illustrations by Jack E. Davis. The book includes two dozen verses that are sure to get kids laughing—verses like this one about a fellow named Cannibal Horner:

Cannibal Horner
Sat in a corner
Eating a people potpie.
He bit his own thumb
And cried, “Oh, yum, yum,
A tasty young morsel am I!”

And this one about Mary who had a vampire bat:

Mary had a vampire bat.
His fur was black a s night.
He followed her to school one day
And promised not to bite.
She brought him out for show-and-tell;
The teacher screamed and ran.
And school was canceled for a week,
Just a Mary planned.


Judy Sierra Gives Us the Story Behind the Book

I've always enjoyed parody. As a child, I couldn't wait for the next MAD Magazine to appear at the corner store. In an earlier book, The House that Drac Built, I wrote a monster parody of an old nursery rhyme, and afterwards others kept popping into my head, such as

There was an old zombie who lived in a shoe.
She had so many maggots, she didn't know what to do.
So she soaked them in soapsuds and painted them green.
She'll be giving them out next Halloween.

When I'd put together twenty or so, I sent them to my agent. She found them too juvenile (!) and refused to submit them. I did what any self-respecting writer would do. I got a different agent.

Jack E. Davis also captured my spirit on the cover. Monster Goose, c'est moi, wearing reading glasses, typing away on a laptop, a manic gleam in her eye. 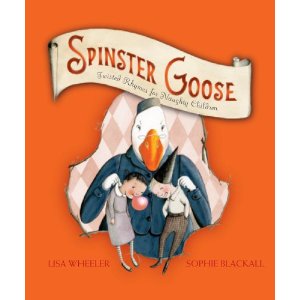 Now we have a new collection of funny nursery rhyme parodies titled Spinster Goose: Twisted Rhymes for Naughty Children brought to us by author Lisa Wheeler and illustrator Sophie Blackall. Spinster Goose is the sister of Mother Goose. She knows how to handle little urchins who are simply too naughty for Mother Goose. Spinster Goose keeps close watch on the young troublemakers at her school and tries to make sure that they get their comeuppance. I guess one could say that her school is a place of “rhyme and punishment” where…

The pinchers get pinched,
and the pokers get poked.
The biters get bit,
and the smokers get smoked.
The takers get taken.
The sordid get sore.
The shakers get shaken
right down to the core.


One of Spinster Goose’s incorrigible students is Peter, a boy who likes to cheat. Here’s a little info on him:

Peter, Peter was a cheater.
Stolen grades
Could not be sweeter.


There are also other children with bad habits and behaviors that need to be addressed. Mary likes to fib a lot. Wee Willie Winkie is a perpetual tattletale. Dirty Polly Flinders has terrible personal hygiene and smells. Little Miss Muffet is into eating colored chalk. Little Bobby Shaftoe steals treats from the teacher’s lounge. And every learning institution has to have a bully, right? Well, Spinster Goose takes care of Georgie Porgie who enjoys picking on his youngest and weakest schoolmates.

Georgie Porgie
puddin’ and pie.
Pushed first graders,
made them cry.
Poked preschoolers,
took their ball.
Picked on people weak and small.
When the Spinster came outside,
Georgie Porgie ran to hide.

The tough schoolmarm sees to it the Georgie stays away when the little tots come out to play.

These darkly funny verses that are riffs on familiar rhymes are sure to tickle the funnybones of young childen. Sophie Blackall’s muted ink and watercolor illustration are delicate and spare. They add just the right touches of wry humor to this collection of parodies about pupils who aren’t on their best behavior.


JACK AND JUNE
Jack and June went to the moon,
Crash-landed in a crater.
Jack broke his nose and seven toes.
(He’s a crummy navigator!)
Jack cried in pain. June tried in vain
To soothe her injured mate.
She bound his toes and kissed his nose
And asked him for a date.
Jack and June began to swoon…
Fell mad in love and they
Returned to Earth, their place of birth…
And wed the very next day.

MARY HAD A LITTLE MOON

Mary had a little moon.
It shone just like a star.
And everywhere that Mary went
She brought it in a jar.

She sneaked it into class one day,
Which was against the rule—
But teacher smiled because it was
The brightest thing in school.

Mary had a lotta luck
At Shoot the Wad Casino.
She worked the slots and rolled the dice
And won ten games of keno.

When Mary cashed in all her chips,
She gotta lotta dough.
Now every fella in our town
Sure wants to be her beau!
CRINKLE, CRINKLE, MY OLD FACE
Crinkle, crinkle, my old face…
It’s got wrinkles every place.
It’s got crow’s feet; it’s got creases.
The aging process never ceases.
Saggy, baggy, flaccid skin—
I’ve got a droopy double chin.
I need a facelift, botox, too…
Then I’ll look as young as you!
Posted by Elaine Magliaro at 12:43 AM

Did you know today was Mother Goose Day? It's also Save the Rhino Day, so I rewrote a little nursery rhyme for the rhinoceros today on my blog. TeacherDance pointed me in your direction saying you had some fractured nursery rhymes on your blog and I should check them out! Mine's at: mainelywrite.blogspot.com if you want to read it. It's short!
Great job, btw, on your rhymes! Especially liked the Crinkle, Crinkle, My Old Face!

A perfect post for mother Goose Day. I can't wait to use some of these collections on my older story time audiences.