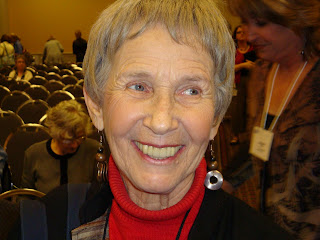 BOBBI KATZ
The Inspiration for My "Things to Do" Poems

Last week, poet Heidi Mordhorst left a couple of questions for me in the comments section of one of my Poetry Friday posts.

Her questions:
- Where can I see more of your Things to Do poems?
- How did you get started with that?

And Looking for the Write Words left the following comment: You know how much I love your poems so my contribution is modeled after many of your Things to Do poems.

I thought it might be a good time to explain how I got started on writing “things to do” poems.

The process began in 1995...I think. I was trying to come up with new ideas for writing poems with my second grade students. I was looking through Paul Janeczko’s book Poetry from A to Z: A Guide for Young Writers when I read a list poem by Bobbi Katz titled "Things to Do If You Are the Rain.” That jogged my memory. I went to my bookcase and pulled out Upside Down and Inside Out: Poems for All Your Pockets, a collection of poems written by Bobbi. In the middle of the book, I found six "things to do" poems—

Pretend you are a dragon.
Live in underground caves.
Roar about underneath the city.

Perch on the branches of all the trees—
Sparkle when the sun shines—
Quiet the city.
Close the schools.

I really liked the idea of writing list poems using this type of format. I went into school one day shortly thereafter and wrote some collaborative poems with my students.


Things to Do If You Are a Witch

Wake up at midnight.
Fly around the moon
on your magic broom.
Zoom around a haunted house.
Swoop out of the dark sky
and scare children.
Have a huge purple wart
on the tip of your long, pointy nose
and skin as green as grass.
Wear a tall black hat
pointed as a thumbtack.
Make yucky snake skin potions
in your kettle.
Cast nasty spells on princes
and turn them into toads.
Eat vulture leg stew, bat wings,
and frog eyes for lunch.
Throw bat noses into the air
and catch them in your mouth.
Go to sleep in a graveyard
before the sun comes up.

My students enjoyed writing “things to do” poems together. Later, they attempted writing some on their own. Some students would even write them from time to time when given a poetry writing assignment.

NOTE: You’ll find some “things to do” poems my students wrote about animals during the 1995-1996 school year here.


And here are three of the “things to do” poems about space that my students wrote in 1998:

Things to Do If You Are the Sun
by Teddy B.

Explode your fiery volcanoes.
Reach your flaming arches
millions of miles into space.
Show off your sunspots.
Heat up your solar system.
Shine on the planets for
billions of years.
let your light give life to Earth.
Spin all the planets around you.
Don’t let the planets
get lost in space.

Spin around the Earth.
Come out in the evening.
Put on your silver dress
and dance in the night sky.
Shimmer like a pearl.


What to Do If You Are the Sun
by Lila M.

Shine on the planets
and their moons.
Give Earth dawn and dusk.
Stretch out your arms of light
and wake people up in the morning.
Hug Earth with your warmth
and help living things grow.
Show off your glorious crown
during a solar eclipse.

Here are two "things to do" poems in that journal that remain in their “rough draft” stage:

Things to Do if You Are a Frog

Be beetle small.
Don’t be green.
Be ruby red, topaz yelloe, or amethyst.
Sit inside a rainforest flower
Like a little jewel
Drinking dewdrops.


Things to Do If You Are A Fish

Be sleek.
Flash your silver scales.
Slip through the water like a whisper.
Play hide and seek in the seaweed.
Watch your breath rise in spheres
to the surface of the sea.

Here are links to some of my original “things to do” poems that I’ve posted at Wild Rose Reader:

Things to Do If You Are a Mole

Things to Do If You Are a Castle

Things to Do If You Are a Mountain

Things to Do If You Are a Lawnmower

Things to Do If You Are Grass

Things to Do If You Are the Moon

Things to Do If You Are a Bell

Things to Do If You Are the Ocean

Things to Do if You Are an Orb Spider

Things to Do if You Are a Cow

THANK YOU, BOBBI KATZ FOR GIVING ME INSPIRATION!!!!!

At Blue Rose Girls, I have some poems and links for Banned Books Week.

Karen, at The Blog With the Shockingly Clever Title, is doing the Poetry Friday Roundup today.

Posted by Elaine Magliaro at 10:11 AM

These are all great! I especially love the beauty and simplicity of "Moon" by Joey G. Thanks for explaining your processes.

"Upside Down and Inside Out" was first published in 1973. It's now out of print. You may be able to buy a used copy. I have bought a number of out-of-print children's poetry books online.

Writing "things to do" poems appealed to many of my students. My students usually wrote them after we had finished a unit of study...so they had knowledge of the subjects they wrote poems about.

Looking for the Write Words said...

I was pulling up a couple of my favorite poetry places to share with my new poets this afternoon and here I am at yours again! Thanks for sharing your Things to Do journey. I love Bobbi Katz's writing also. Happy Poetry Friday.

Hee hee! I was pretty sure that Bobbi started you off--I used "Things to Do If You Are a Subway" (anthologized in some book I must have somewhere) as a springboard for poetry writing with 6's and 7's way back in London in 1994-95. I was just rereading some of those group poems standing in my basement recently! Thanks for sharing the whole collection and for the pointer in the right direction!

To add a little--I didn't realize that there were quite a few, and what's amazing to me is that unlike some other forms popular for use with children, this one doesn't wear thin. It gives focus without putting words in the writer's mouth, which should be true of most forms, but somehow isn't. Is it because it encourages a kind of command, and lots of action?

You know I love your Things to Do poems--I'm sharing the pencil one at a conference this week, in fact! Thanks for this super duper post and gathering so many of them in one spot. I love your kids' poems--that moon one especially!