Stampede!: Poems to Celebrate the Wild Side of School 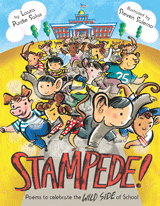 Stampede!: Poems to Celebrate the Wild Side of School
Written by Laura Salas
Illustrated by Steven Salerno
Clarion, 2009

Stampede! is a collection of poems that tells about various experiences children have when attending elementary school—feeling lost at a new school, thinking about picture day, playing at recess, waiting for lunchtime, sharing time, counting on one’s fingers. Salas said she was inspired to write the poems after her younger daughter had two teeth pulled at the dentist’s office. She thought her daughter looked like a walrus—albeit a cute one—once her teeth were gone. Salas says she then began seeing kids with “fangs and fur instead of ponytails and soccer shirts.” And so she wrote these poems in which children take on attributes of animals: Children are like a “swarm” of bees on the playground before the school doors open, a child at a new school feels like a mouse finding its way through a maze, one child sees herself as an ugly caterpillar before picture day arrives, children walk down the hall likes “ducks in a row,” students thunder out of school like a stampede of elephants at the end of the day.

The book opens with Swarm. Here’s how the poem begins:

We crowd the empty schoolyard,
a flood of bumblebees.
We buzz and flitter-tumble,
trade gossip in the breeze.

Each hallway is
a hallway clone.
Can’t find my way
around alone.

A thousand halls,
a thousand ways,
I’m lost inside
this new-school maze.

And so it goes with the human “animals” in school and out on the playground: A boy messes around in the mud like a pig in Whole Hog; a child thinks his writing looks like chicken scratch in Printer Problems; a student tries to tuck his face into his sweater in hopes that the teacher won’t call on him in Turtleneck; a girl warns classmates to stay away when she’s feeling nasty and porcupine-y in Prickly.

The collection closes with the poem Stampede!—in which children storm out of the building when the school bell rings at the end of the day:

The last bell rings.
We spill outside,
like captives finally freed…

You can read the entire poem here.

Salerno’s bright, bold cartoon-like illustrations add just the right touches of humor to this light-hearted collection. Stampede! contains eighteen rhyming poems perfect for sharing with young children in the early elementary grades. It’s a good collection to include in a teacher’s classroom library.

NOTE: I’d like to thank Laura Salas for granting me permission to post the full text of her poem New Mouse in my review of her book.

I have two posts over at Political Verses this week—Political Pop Singers: Four Couplets and MARIA: A Song Parody about Maria Bartiromo.

At Blue Rose Girls, I have September 1, 1939—a poem W. H. Auden wrote after hearing about Germany’s invasion of Poland seventy years ago.

Kelly Herold has the Poetry Friday Roundup at Crossover this week.

Posted by Elaine Magliaro at 1:39 AM

Hey, thanks, Elaine! I stopped by here because I knew you'd know who was hosting the roundup (and of course, you did), and what a lovely surprise to see my book cover pop up into my blog reader:>)

I can't tell you how I appreciate your timing, since I really haven't done any of the marketing I had hoped to do at the beginning of the school year (shhh--don't tell).

I posted a review of Laura's book the other day, paired with Pat Lewis's - they are both such great collections out this year!

"like captives freed"... oh, my 9 year old will totally relate to that. :) Thanks for the review!

Thanks Elaine! So wonderful to look forward to a new book, a new addition to our poetry library. I appreciate the review!

Isn't it a great book? And doesn't that art just wake you right up?

A must-have for my collection!

Hi,
I came across your blog as over the past few days I have been surfing the net for blogs written by children’s authors or those reviewing children's books, hoping for tips and inspiration. I will shortly be volunteering at a tiny school in the slum area of Bangalore, India. Story telling will be one of my activities. However, story books and story telling will be a new concept here, so I am a bit nervous.
You are right, poetry is such fun.
Best,