When I began blogging at Wild Rose Reader in April of 2007, there was something I had to seriously consider: Would it be wise to post my original unpublished poems here? At the time, I remember other writers who blog discussing the subject of putting our work “out there” without getting paid for it. Some thought it would be unwise. Even though I wasn't sure it was the smartest thing to do—I decided to post dozens of my original poems at Wild Rose Reader anyway.

TWO QUESTIONS
I asked myself: Would any editors be interested in publishing a poetry collection I had written if some of its poems had already been posted on my blog? Would any anthologist/publisher ever pay me for permission to use any of these poems in anthologies?

I can answer the second question in the affirmative. Earlier this year, a poet/anthologist in the UK asked permission to use a poem I had posted in 2007 at Wild Rose Reader in an anthology that he's compiling. The poem will be included in the book My Cat Is in Love with the Goldfish and Other Loopy Love Poems. The book will be released next February. I also received a request from a well-known poet/anthologist in the United States in August. The anthologist asked if he could use two of my poems in a special project that is being published in conjunction with The Academy of American Poets. Hooray!!! 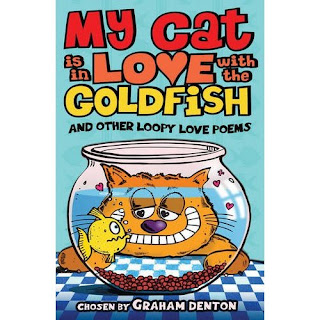 Once I started posting my original work at Wild Rose Reader I never looked back. I love writing poetry. I enjoy sharing my poetry with kidlit bloggers, poets, writers, teachers, and other visitors who stop by to read it. I like reading the comments people leave for me. After all, I write because I want to share my creative thoughts with others—and once in a while, it actually pays off!

At Blue Rose Girls, I have a poem by Alexandra Teague titled Language Lessons.

The Poetry Friday Roundup is at Becky’s Book Reviews.

Posted by Elaine Magliaro at 11:18 AM

That's great, Elaine! You had a clear mission of the love of poetry and sharing it so you went for it. It obviously showed in the response you received. Yay!

Thanks, Sara. I know how difficult it is to get a collection of children's poetry published. I decided I might as well share some of my poems with people rather than let them molder in old folders or remain imprisoned in Word documents on my computer.

Congratulations, Elaine!! I'm looking forward to seeing both anthologies. I'm so glad these astute readers spotted excellence and can offer a good place to showcase it. :)

Thanks you, Jama, for your kind words. I'm excited already--can't wait to see the books.

I've always wondered the same thing and figured a poem shared is better than a poem collecting cobwebs.
So glad to see we are right:)

I guess you can call it good poetry karma. What you put out there comes back to you, even better. And this is great!

Jill, you are absolutely correct about sharing our poems instead of letting them collect cobwebs. Oh, there's nothing like good karma...right?

Elaine, congratulations! How wonderful. What lucky anthologists they are to have your poems in their books! They know talent when they see it!

And thank you for sharing your poems with us. I love reading them!

Congratulations on the anthology! I was a little worried when I first started reading this, afraid you would convince me to not post my original stuff. So glad I am in agreement with you and for all your reasons. Poetry needs to be shared.

Thanks for commenting on my post. I'm glad I took a chance and posted many of my poems at Wild Rose Reader, Blue Rose Girls, and Political Verses. I'm also happy to continually have the opportunity--especially on Poetry Fridays--to read original poems by my fellow bloggers.

And, yes, poetry needs to be shared!

I'm so glad others are finally discovery your fine work. I can't wait to see what's coming next!

Thanks, Tricia. I'm taking everyone's postive words to heart. I've haven't done much writing this year. I guess I've lacked focus--and had little inspiration.
THEN...a few days ago I got an idea for a new poetry collection--and I'm back writing again. What a relief! Dealing with an extended period of writer's block is extremely frustrating.

So glad you are writing again!

I find that I have many, many poems (like I am sure most of us do) and never bother to submit them. This in itself makes me stop writing more.

Wonderful that you have an idea for a new collection. I think that alone is a wonderful motivator to write, recognize your audience, and submit:)

Elaine, that is just wonderful! I am so happy for you.

Will US readers be able to order a copy of the UK book? (That looks like our cat & goldfish on the cover!)

The best thing about my new book idea is that, in addition to new poems, I'm using several poems from an unpublished collection and a couple of poems I wrote specifically for posting at Wild Rose Reader. When I was reading through my manuscripts and the original poems I'd posted at my blog the other day, I realized that I had written lots of poems that spoke to a particular theme. Then the light bulb in my brain turned on! I have even come up with a good title for the collection--I think.

Thanks! I believe people will be able to order the book through Amazon. I asked the publisher if I could accept the fee for my poem in copies of the book in lieu of a monetary payment.

Elaine, I'm so glad you posted this. I've posted some of my work, but I tend only to post things I've already extinguished first rights for elsewhere OR things I don't think will sell. Your experience makes me think of loosening up a bit more . . .

Congratulations, Elaine! That's a terrific story of feeling abundant with your poetry, and how sharing them led to an even wider audience!

I have wondered these same questions but keep posting regardless. I mostly post things I write for poetry practice, not things I ever plan to try to publish. It's nice to hear that blog publishing doesn't always preclude print publishing, though.

I have also wondered about posting online. I am a fairly new poet, and have been posting on blogger (angstandagony.blogspot.com) and on writing.com, and I've wondered the same things, whether it is smart to put them out there where anyone can see them without being published, and if it would be a problem with potential publishers if I had previously posted the poems online. anyway, plan to read some of your poetry, feedback on mine would be greatly appreciated. Thanks and have a swell day

Your blog keeps getting better and better! Your older articles are not as good as newer ones you have a lot more creativity and originality now keep it up!