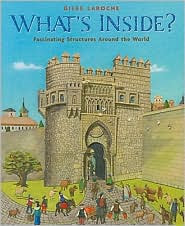 Recently, at an event sponsored by The Foundation for Children’s Books, I had an opportunity to speak with children’s author and illustrator Giles Laroche. Giles was there to talk about his newest publication, What’s Inside?, a book that takes a look at both the outsides and insides of different “fascinating” structures around the world. The structures Laroche writes about in his book include the Tomb of Tutankamun in Egypt, the Temple of Kukulcan on Mexico's Yucatan Peninsula, the Sakyamuni Pagoda in the Shanxi Province of China, the Alcazar Castle in Spain, the Guggenheim Museum in New York City, and the Sydney Opera House in Australia.
Giles with one of the illustrations from What's Inside? 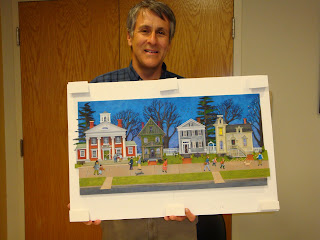 Giles Laroche is well known for the intricate cut paper illustrations that he has created for his previously published children’s books: Down to the Sea in Ships, Bridges Are to Cross, What Do Wheels Do All Day?, Sacred Places, The Color Box, and Ragged Shadows—among others.

What readers will find between the covers of What’s Inside? is some of Giles’ most detailed and exceptional paper relief artwork that he has done to date. What’s Inside? is the kind of book one can savor…over and over again. It’s a nonfiction picture book for children in upper elementary grades, children who are interested in different types of buildings/architecture, and adults.


At the end of a long underground passageway an archaeologist opens this sealed door. Leading to a series of hidden chambers, the door has not been opened in nearly three thousand years. (The illustration shows Howard Carter unsealing the entrance to King Tut’s tomb while two onlookers watch expectantly.)

In 1922, the archaeologist Howard Carter discovered King Tutankamun’s tomb, placed in underground vaults to survive the ages, its sole entry hidden from robbers.

Laroche goes on to tell about the treasures found inside the tomb, the Egyptians’ belief in the afterlife, and King Tutankamun’s ascent to the throne when he was just nine years old. In the sidebar, we read that the tomb was buried 25 feet underground, had four rooms that were 8-10 feet high—and that sealed boxes found in the tomb contained raisins, dates, nuts, watermelon seeds, cakes, bread, cereals, onions, and meat.

NOTE: In some cases, Laroche used double-page spreads because of the size of particular structures. For example, inside the Puerta del Sol (Gate of the Sun) or Blacksmith’s Gate in Spain, there lies the entire city of Toledo. He also created a two-page panoramic spread of Kuala Lampur to show how the Petronas Twin Towers “tower” above the other structures in the city.
Toledo, Castilla La Mancha, Spain 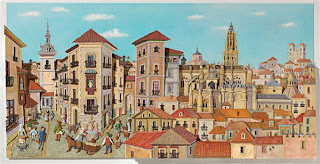 I found some of the most interesting information in the “Little Known Facts” sections. In these, I learned that the Parthenon was originally painted in shades of blue, ocher, and gold; that the Alcazar Castle in Spain served as the model for the castle at Disneyland; and that the design for the Petronas Towers was based on an Islamic geometric pattern symbolizing unity, harmony, stability, and rationality. 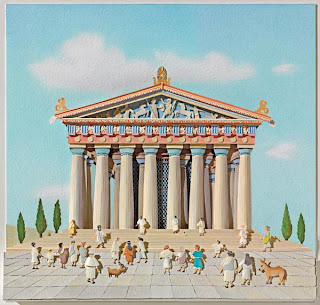 In the back matter of the book, there is a Glossary of Architectural Terms. A tiny square illustration accompanies each term—which, I think, is a wonderful added feature. In this section, the author included brief descriptions of 26 terms, including acropolis, cupola, moat, pagoda, pediment, pentelic marble, sanctuary.
A red throne in the shape of a jaguar
is "what's inside" the Temple of Kukulcan Giles Laroche’s newest book is a visual stunner. I suggest you get yourself a copy and find out what’s inside!

Elaine: What inspired you to write and illustrate this book?

Giles: My interest in and curiosity of places and structures is what inspired my work for this book. In turn I wanted to inspire and share those same interests with young readers, future builders, and travelers.

Elaine: What kind of research did you undertake and what types of resources did you use when gathering information for this book project?

Giles: I used a wide variety of sources for my research, mostly books of which I have thousands. I frequent three local libraries and have access to a vast library of books on architecture. My own journals, photos, sketches from my travels come into use and I do some research on the Internet as well. Feed back from architects I know and from people who have traveled to some of these places is very helpful too. In many cases I contacted the actual place to get additional information.

Elaine: How did you decide on the subjects you wrote about in the book?

Giles: I wanted to include culturally significant structures as well as those less well known all of which had an "inside” readers would be curious about. They are sometimes predictable, such as the barn or circus tent, or a surprise; the jaguar throne, or city of Toledo. I also kept in mind a variety of geographical locations and cultures. They are presented chronologically. I chose places I have been too, have yet to see, or perhaps will never see.

Elaine: How long did the book project take from inception to completion?
Giles: The entire project took three years. The first year on the text and sketches, the second year on the art and some text revision.

Elaine: Are there any new projects you have in mind or are working on at the present time?

Giles: I am currently at work on a new book that is also about places and buildings. More later.
Giles' studio in New Hampshire is part of a 230-year-old barn. 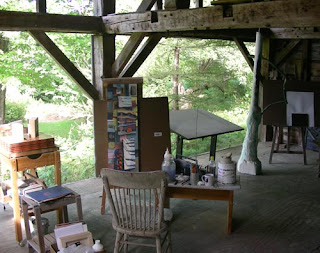 I would like to thank Giles Laroche for taking time to answer my questions and for allowing me to post images from his new book.


The Nonfiction Monday Roundup is at Charlotte’s Library this week.
Posted by Elaine Magliaro at 10:15 AM

Oh my gosh, that looks perfect for my son. Onto my list it goes!

It's a gorgeous book! I love the paper relief illustrations that Giles creates for his children's books.

Great review, Elaine, and it was interesting to hear from Giles. I didn't realize the Parthenon was originally colored blue, ocher and gold (and I've seen the ruins in person). And the Tomb has always fascinated me. I'm anxious to see this book!

Thank you for this review/interview! It's going on our list, too.

I've learned a lot from reading children's nonfiction books over the years. I love Giles' picture book art. I own nearly every book he has illustrated.

I hope you enjoy reading the book.

Nice interview, Elaine! Spy Girl will love this book. Thanks for the recommendation!

Ooh! Thanks. The book looks great. Going to try to find a copy.