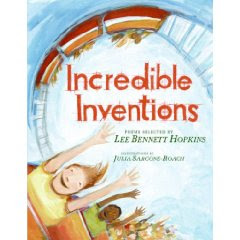 Incredible Inventions is another fine poetry anthology compiled by Lee Bennett Hopkins. What one may find surprising are the subjects written about in this book. Many of the poems aren’t about the kinds of things most kids typically think of as inventions—airplanes, microscopes, automobiles, computers, telephones, elevators. No, in this book, kids will find poems about “inventions” like jigsaw puzzles (1766), blue jeans (1873), drinking straws (1888), Fig Newton cookies (1891), popsicles (1905), band-aids (1920), kitty litter (1947), and modern athletic shoes (1964). That’s part of the fun and attraction of this new anthology. There’s a good possibility that this book could be used to spark children’s curiosity, to encourage them to look at everyday objects around them as inventions—and maybe even to wonder about who might have invented them and why.

There is a nice variety of poetry contained between the covers of this anthology. John Sullivan’s poem about basketball tells about the sport during the different seasons in a series of four haiku (sweltering night/one player left alone on the court/alone with stars). There are shape poems and free verse. Many of the poems rhyme and are light-hearted in nature—like Brushes Rule by Constance Andrea Keremes. This poem is composed of ten couplets. This is how Keremes begins her poem:

Time was when fingers did the trick.
Pat this, part that, do it quick.

But hair’s no simple thing today.
You have to gel, highlight, spray.

You need a brush to get things right.
(A comb will only tug and bite.)


In Signal’s Lament, Alice Schertle speaks in the voice of a bored traffic signal who longs to “signal” drivers to stop, go, and slow down, with a more artistic palette of colors than red, green and yellow. It imagines doing its job with colors like magenta, maroon, aquamarine, cerulean blue, and cadmium orange. The signal tells us…

I may look like a pole, but I have the soul
Of an artist, a star, a flamingo!
And speaking of pink, that’s a winner, I think.
Add a touch of vermilion and BINGO!

In another mask poem, Maria Fleming’s Velcro sings its own praises while denigrating the quality of other fasteners:

I sneer at snaps,
the lowly lace.
They lack my lock,
my fierce embrace.

(Don’t even think
of saying zipper.)


Kids are sure get a kick out of Marilyn Singer’s In Here. Kitty, Kitty. It’s a poem about Edward Lowe, the inventor of Kitty Litter. Here’s the last stanza of the poem:

He wasn’t Edison or Whitney.
Still feline owners didn’t titter.
Oh, to think he banished stink
with tons and tons of Kitty Litter.


Ann Whitford Paul entices readers to think “outside the box” in Inside the Box, her poem about Crayola crayons. She ends it with this thought about using one’s imagination and creativity:

But who says a seed
must be brown?
A field of corn green?
A flat tire black?
As you take crayons
from their box
break out of your own box.

Turn your paper
into a whole new world.

The back matter of the book contains two or more paragraphs of information about each of the inventions and inventors written about in the poems. It also includes a timeline.


Julia Sarcone-Roach’s illustrations serve as an unimposing backdrop for the poems in this anthology. They add just the right touches of color, humor, and whimsy.

Incredible Inventions would be a wonderful anthology to have on hand in an elementary/middle grade classroom. It could be a great stepping off point for a unit on inventors and inventions.


Click here to have a “sneak peek” inside Incredible Inventions.

My Reviews of Other Poetry Anthologies Compiled by Lee Bennett Hopkins

Lee Bennett Hopkins is the 15th winner of the NCTE Award for Excellence in Poetry for Children. Read about Lee and his work here. Read more about Lee at the following blog post written by Sylvia Vardell: More on LBH and the 2009 NCTE Poetry Award.

At Blue Rose Girls, I have Sunflakes, a children’s poem that was written by Frank Asch.

The Poetry Friday Roundup is at Carol’s Corner today.
Posted by Elaine Magliaro at 9:45 AM

PERFECT to pair this new Hopkins collection with Sidman's inventors (and what say JPLewis' poems about work?!?!) Gotta have this one!

Are you speaking of Pat Lewis's THE UNDERWEAR SALESMAN? That book is a lot of fun! Some funny verses in that collection.

Great! I haven't seen this. Going to see if my library has it. Many thanks!

P.S. Speaking of THE UNDERWEAR SALESMAN, as you did, I'm trying to get some spreads from it to show in a sort of Serge Bloch feature, as I've got some Serge art from Davide Cali's THE ENEMY to show. I hope the art comes through. I like both books.


I haven't seen THE ENEMY. I do like Bloch's art in THE UNDERWEAR SALESMAN. It's a perfect match for the funny verses.