The Frogs and Toads All Sang: A Book of Poems by Arnold Lobel 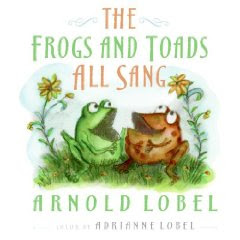 The Frogs and Toads All Sang
Written & Illustrated by Arnold Lobel
Color by Adrianne Lobel
HarperCollins, 2009

Arnold Lobel’s Frog and Toad books certainly stand as the standard bearers for early readers. They are wonderfully written tales of friendship full of humor and warmth. The books are great for independent reading for young children. They are also outstanding books to read aloud.

I stopped by the Banbury Cross Children’s Book Shop a few days ago and was excited to find out that a book of frog and toad poems that was written and illustrated by Arnold Lobel many years ago had recently been published. The book, The Frogs and Toads All Sang, includes an introduction by Lobel’s daughter Adrianne. In the introduction, Adrianne explains how this book came into being. I won’t go into detail here—but I will tell you that its text and drawings were handmade into a book by Arnold Lobel and given as a gift to Crosby and George Bonsall. The book was bought in an estate auction by a man named Justin Schiller. The man contacted Adrianne in September 2008 to inform her of all the handmade books he had purchased that were created by her late father.

Adrianne writes about The Frogs and Toads All Sang: “I think that the poems and pictures are important in the grand arc of Arnold Lobel’s work. This was the first time he wrote about frogs and toads. Also, the exuberant vitality of the sketches is not representative of the kind of work he was doing for publication at the time.”

Adrianne says that she used her father’s preferred technique to color the sketches for this book. She also notes the following: “I hope in some small measure I have done well by him.”

In my opinion, Adrianne has done her father proud. The colored illustrations are a delight and certainly enhance this book of ten poems better than black and white sketches.

Updated to Add: Here’s a video from HarperCollins in which Adrianne Lobel talks about The Frogs and Toads All Sang, her father, and her process for coloring her father’s drawings. It includes images of some of the wonderful illustrations included in the book.

About the Poems: Lobel proves himself an adept writer of light verse. His rhyming poems are rhythmic and scan well. There’s a sense of whimsy in these fanciful poems that tell about such things as a frog who bakes apple pies and sugar buns—and then eats them all herself; a toad who eats and eats all day long until it hurts; and a frog who decides to jump to the moon one June evening…and hits his destination in late July.


Here’s a poem from the book to give you a flavor of the verses that Lobel wrote many years ago:

A sunny day
Is made for toads
To play and leap
Down dusty roads.
A rainy day is made for frogs
To swim in swamps
And under logs.
In weather gray
Or weather bright,
For some, the day
Will be just right.

Other poems in this collection include the following:

The Frogs and Toads All Sang is a poem about frogs and toads having a “dress up” party with paper lamps, lemonade, and an orchestra…and lots of dancing.

Polliwog School is a poem about tadpoles swimming to class where all they do is wiggle and squirm and giggle.

Bright Green Frog is a poem about a musical amphibian that fiddled waltzes on his violin, but what he really wanted was to play a clarinet.

There Was a Frog is a poem about a frog who has a car that he drives fast and far—but he never looks at traffic lights and never learned how to stop his vehicle.

Night is a poem in which two toads agree that they need clocks so that when they wake and there’s no light they’ll know that it’s nighttime.

A Toad Was Feeling is a poem about a toad who’s “sad and grumpy” because his skin “was rough and bumpy.” So he buys himself a soft, furry coat to wrap himself in.

I have little doubt that young admirers of the Frog and Toad series will enjoy this collection of poems and illustrations by Lobel. It is infused with the same sense of gentle humor that made Lobel's stories about two unforgettable amphibian friends such perennially popular books.

A Remembrance of Arnold Lobel
Frog and Toad Are Friends of Mine (From The Bulletin for the Center for Children’s Book—Gone But Not Forgotten: Arnold Lobel) 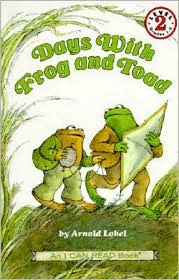 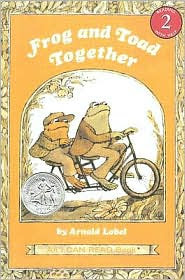 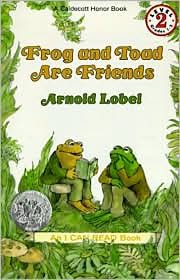 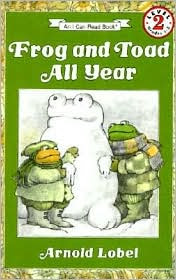 At Blue Rose Girls, I have a poem about teaching written by Mary Ruefle entitled The Hand.

Posted by Elaine Magliaro at 9:30 AM

I saw the news story about this book, but this is the first in-depth post I've read about it. I love Frog and Toad so much that any addition, however delayed, is welcome. Got to find this one!

I hadn't heard anything about the book until I stopped by my friend's book store. While there, I asked if she had any new poetry books--and she handed me The Frogs and Toads All Sang. I, too, love Frog and Toad--so I couldn't resist picking up a copy for myself.

Oh, my gosh! This is like a Christmas surprise. I LOVE Frog and Toad, and I love that first poem you share. I cannot wait to get my hands on this...

The book was a big surprise to me too. I thought it would be a good idea to write a review of it for Poetry Friday. I hope you like this new book of poems by Arnold Lobel. I thought it was really fun.

You've made me SO happy. Had no idea this book existed, and I so love Arnold Lobel. I'm going to treat myself to a copy. Thanks for the review!!

I love Lobel too. His Frog and Toad books are in a class by themselves.

What a pleasant surprise to find more Lobel to enjoy. I liked the story behind how they were discovered too.

It WAS pleasant to find more Lobel to enjoy. I felt the same excitement when Valerie Worth's book ANIMAL POEMS was published posthumously a couple of years ago.

Thank you for the wonderful news!! I had no idea this was out. You made my day. :) Thanks for the review!

What fun! Loved the video!!

See what happens when I miss Poetry Friday? I was so busy and then got into the 48 hour reading challenge, so my normal Saturday morning blog reading didn't get done! Thanks so much for sending me the link. I added it to my post on the book.