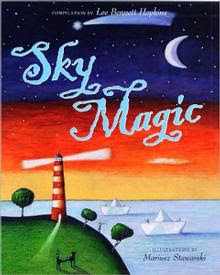 Sky Magic is a new poetry book compiled by anthologist extraordinaire Lee Bennett Hopkins. I have never counted the poetry books by Hopkins that I have in my collection—but I know they number in the dozens! Name a topic—and it’s likely you’ll find that Hopkins has edited a poetry anthology on the subject: war, famous people, museums, food, school, American history, the sea, animals, insects, geography, sports, weather, pets, space, science, math, holidays, inventions, books and reading, words and language, song and dance. I could go on and on and on.

Hopkins never disappoints poetry lovers like me with his anthologies—whether they are intended for the very youngest of children or for older kids. Sky Magic is definitely another fine compilation that elementary teachers will want to have on hand in the classroom—or available in their school libraries.

In addition to the fine poems included in Sky Magic, I'd like to note that the art by Mariusz Starwaski truly enhances the text and adds an almost ethereal dimension to the selections. I also want to comment on the thoughtful organization of the book. Hopkins arranged the poems he chose about the sun, moon, and stars in a lyrical progression that takes readers from the rising of the sun at dawn, to the setting of our "daystar" and arrival of the moon, to a night sky filled with stars.

I had read a few of the poems in Sky Magic in other collections and/or anthologies before—David McCord’s Orion, Ashley Bryan’s Song, and Carl Sandburg’s Stars. Most of the fourteen selections, however, were new to me. These poems include works written by Hopkins, Avis Harley, Rebecca Kai Dotlich, Georgia Heard, Tony Johnston, and Alice Schertle.

The anthology opens with Sarah Hansen’s Rising, a poem in which the Sun rises/Tempting dawn/To break/Her golden crust, and ends with James Guthrie’s Last Song—in which we say a fond farewell to the Sun/Who has shone/All day/To the moon/Who has gone/Away…and To the milk-white/Silk-white/Lily-white Star.
Each poem in Sky Magic is a little gem of words that looks at objects in the heavens with wonder and imagination. In Sun, by Lyn Littlefield Hoopes, the sun speaks to us saying: I come to you/a diamond/on the morning dew. In Set, Sun, Hopkins tells the sun it’s time to go and Take/the/breath/of/day/away. Alice Schertle sets us to wondering about the moon in Who Found the Moon?. She wants to know who picked it up when it tumbled from the sky; who rubbed it with his thumb; who felt its silver coolness on his palm.

One of the most soothing and lyrical poems in the book is Ann Whitford Paul’s Moon’s Poem. Here’s an excerpt from it:

Mariusz Starwaski’s paintings done mostly in shades of blue, purple, gold, and orange set the perfect artistic tone for this collection of poems about day and night…about the sun, moon, and stars...and about the sky canvas upon which nature paints them.
Sky Magic is indeed a lovely poetry anthology. I highly recommend it!

At Blue Rose Girls, I have a poem by J. Patrick Lewis entitled To a Frustrated Poet.

The Poetry Friday Roundup is at Critique de Mr. Chompchomp.

Posted by Elaine Magliaro at 8:42 AM

I'm going to blame you when I go broke! Thanks for sharing this. I knew it was coming, but hadn't seen much about it yet. Can't wait to use this for science class in the fall.

It's a lovely anthology. I love finding books like this that include poems I've never read before.

Oh, this one looks gorgeous! I love astronomy and am going to have to order this one. Thanks!