Poetry Book Review: On the Farm

Are you looking for a poetry book about farm animals to share with young children? A poetry book with fantastic illustrations done by the recipient of a Caldecott Honor Award? Then…

Cock-a-doodle-do!
I’ve got a book for you! 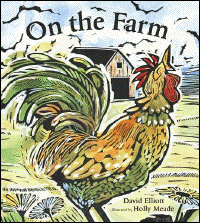 ON THE FARM
Written by David Elliott
Illustrated by Holly Meade
Candlewick Press, 2008

This large-format book contains twelve poems about animals commonly found on a farm: rooster, cow, pony, dog, sheep, barn cat, goat, pig, bees, bull, and two reptiles—turtle and snake. Elliott’s poems, printed in large, bold typeface, are short and playful—as in The Sheep: The Sheep/Began his woolly life/as gentle as a/lamb. Too bad/he turned/into a/ram./BAM! The illustration that accompanies this poem shows two rams butting horns in an orchard while a ewe watches. Her little lamb looks out at readers from the page. As in The Sheep, the titles are often a part of the poems.

Tell their story,
sweet and old.
It begins in clover;
and ends with gold.

Elliott’s rhyming poems, for the most part, are simple and straightforward—but he does include figures of speech in some. For example, the pig’s tail is “As coy as a ringlet.” The snake “coils/in the/garden/like a/ spring…”

Holly Meade’s art truly brings Elliott’s poetry to another level. Known for her mixed media illustrations, Meade used woodcuts for the first time in On the Farm to bring these domestic and wild animals to life. Meade takes us on a tour of the farm with her big, bold illustrations. Her dynamic double-page spreads include scenes of a rooster crowing his head off near the henhouse, a goat chewing on laundry hanging from a clothesline, and a close-up of a snake slithering through a vegetable garden. Meade’s stunning artwork enhances Elliot’s spare text without overwhelming it.

The poems and the illustrations meld together well to produce an attractive package of pictures and poems about farm animals with child-appeal. On the Farm would be a great book to share with children in preschool and kindergarten. 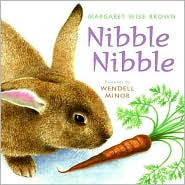 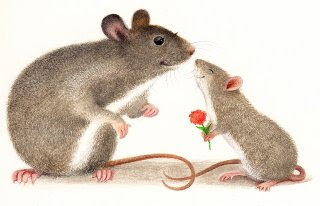 One of Wendell Minor's Illustrations from Nibble Nibble

Posted by Elaine Magliaro at 1:55 PM

Swoon! I am so crazy about those mice. Please tell me this one is still in print!

Do you mean the book Wendell illustrated? It was published in 2007. I have no doubt that it's still in print. I love all of the illustrations in the book.

I love that new Holly Meade-illustrated book! So perfect. I hope to review it soon, too. Good stuff.

I've always liked Holly's style of illustrating. I think her use of woodcuts for the first time in a children's picture book has proved to be successful. I really like the bold pictures in ON THE FARM. They work so well with Elliott's poems.