A Poem for Robert

I wrote the poem below for Grace Lin’s husband Robert Mercer in the spring of 2004 when Grace informed me that Robert’s cancer had returned and of their plans for the first Robert’s Snow auctions later that year.

a bit of lace, 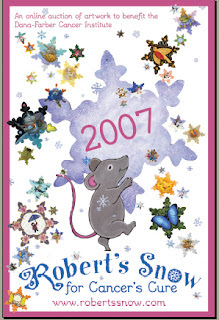 I want to send a million thanks to all the artists who created snowflakes for Robert's Snow 2007. Thanks also to those artists who made Robert's Snow 2004 and 2005 such great successes. We couldn't have raised money for cancer research without your help.
Posted by Elaine Magliaro at 9:40 AM

This is simply gorgeous - thanks for sharing it.

So, so lovely. This should be on the Robert's Snow site. Really, it's a treasure.

This is beautiful, Elaine. I agree with Liz. It would be a wonderful addition to the site.

I appreciate the bit of assertiveness at the end. Sometimes it feels as if Life is making all the rules.

Beautiful! Strong and delicate at the same time.
It flows like spun snow.

I agree: it should be on the Robert's Snow site, shimmering for all to see.

Thanks, everyone, for your comments. I wanted to write something special for Robert and for Robert's Snow.