Judging from a few of the picture books that I have read recently, I have high hopes for the children’s books being published in the second half of 2007. On September 15th, I posted a review of Peter Brown’s The Fabulous Bouncing Chowder, which is a real hoot! And The Luck of the Loch Ness Monster: A Tale of Picky Eating, written by A. W. Flattery and illustrated by Scott Magoon, is a terrific original pourquoi tale with fabulous illustrations.

The book I’m reviewing today, Help!: A Story of Friendship, has everything a great picture book should have: an excellent storyline that flows along at a good pace, a problem that is solved in a clever manner, a message embedded in a text that is not didactic or “messagey,” and illustrations that truly enhance the text—as well as add some gentle touches of humor to this animal tale that is akin to a modern fable. 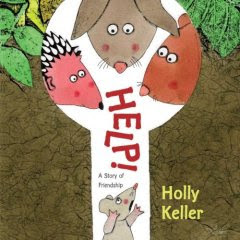 As the story opens, Hedgehog finds Mouse, the main character, covering himself with leaves in order to hide from Snake. When Hedgehog asks Mouse why he wants to hide from their friend, Mouse replies that Fox told him that snakes are very dangerous to mice. Hedgehog tells Mouse that Snake would never hurt him and insists that Mouse accompany him on a walk. But Mouse is wary…and worried. He can’t carry on a conversation with Hedgehog. He is still thinking about Snake. He glances around nervously. He looks everywhere but down and falls into a deep, narrow hole.

In the fall, Mouse hurts his foot and can’t climb out of the hole. Hedgehog tells Mouse he’ll get help. Just then Squirrel comes by and Hedgehog requests his assistance. But Squirrel says he can’t help because the hole is too dark…and there might be spiders. Then along comes Rabbit. But Rabbit can’t help because the hole is too deep and its walls too straight. He’s convinced he wouldn’t be able to hop out of it. And what about Hedgehog? Well…his prickles would hurt Mouse in a rescue attempt.

Hedgehog, Squirrel, and Rabbit stare down into the hole. Helpless Mouse begins to cry. Then wishywishywishy…along comes Snake slithering through the grass. Snake wants to know what’s going on. Hedgehog tells him the whole story. Snake doesn’t understand why Mouse would be afraid of him when he has always been his friend. Snake tells them that he is going to go down into the hole and rescue Mouse.

That’s when Hedgehog asks: “How will you do it without scaring Mouse?” Snake has a clever plan to help his furry little friend without frightening him. Squirrel gets a stick and Hedgehog ties it to Snake’s tail. Snake lowers the stick into the hole. Mouse grabs it and is pulled out of his earthen prison. When Mouse finds out who his rescuer is, he is embarrassed and apologetic for ever doubting Snake’s friendship.

Mouse hobbles home with the help of his four friends. His foot is bandaged and Mouse rests for a time. Several days later, Mouse takes a bouquet of flowers that he has picked to his friend Snake as a thank you gift. In the story’s final illustration, we see Mouse and Snake happily embracing.

The illustrations for Help! are collographs—or printed collages. On the back flap of the book jacket, Keller explains that she has been making collographs for years—but that this is the first time she ever used them to illustrate a book. I’d say it was a wise decision on her part.

Keller fittingly used natural colors in her art for Help!: brown, green, yellow, orange, gray…and touches of pink. She also used black to give texture to the animals’ skin and fur and to the grass, leaves, and soil. The collographs stand out on white background. This helps focus a reader’s attention on the story characters and the natural habitat in which they live. Keller uses white to its utmost effectiveness as the backdrop of the hole into which Mouse has fallen.

Help!: A Story of Friendship is one of the best picture books I have read so far this year. It is a good tale about ignoring gossip and trusting one’s true friends. It would be an excellent book to read aloud and discuss in preschool, kindergarten, and early elementary classrooms.

You might include the reading of Help! along with the following books that were also written and illustrated by Holly Keller in a mini unit about friendship:

FARFALLINA & MARCEL
Greenwillow, 2002
(This book is the recipient of a Charlotte Zolotow Award.) 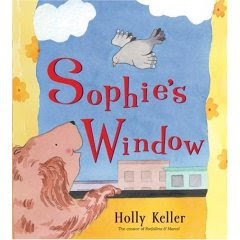 This book caught my eye while I was in the Children's Books Stop up in Brookline a few weeks ago--I really loved it, too!