Dare to Dream…Change the World: A Poetry Anthology Coming in 2012

I am proud to announce that I am one of thirty writers who will have a poem included in a forthcoming anthology titled Dare to Dream…Change the World. The book will be published by Kane Miller. It will be released next fall.

Jill Corcoran is the individual responsible for putting together this “inspirational” anthology with poems about exceptional individuals who “dared to dream” and accomplished great things during their lifetimes.

We poets worked in pairs. I partnered with my friend Janet Wong. I wrote a biographical poem; Janet wrote an inspirational poem. 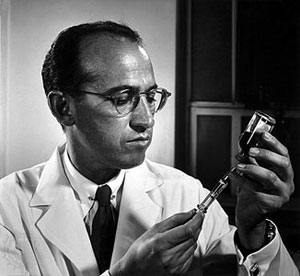 JONAS SALK
My contribution to Dare to Dream is a poem about Jonas Salk—the man who developed the first polio vaccine in the 1950s. I chose Salk as my subject because I remember how frightened parents were back then that their children might contract the dread disease—one that had crippled so many. Highly infectious, poliomyelitis—also known as infantile paralysis—chiefly affected children. 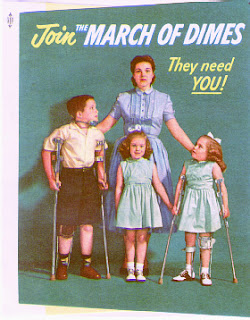 ﻿
I can still vividly recall standing in line at Peabody City Hall when I was about eight or nine years old waiting to get vaccinated. I also recall how relieved everyone was after the Salk vaccine had been declared safe and effective. Jonas Salk changed the world for me and for millions of others.

﻿Here is a poem I wrote about the day that I got my first polio vaccination. By the way, it is not the poem that will be included in Dare to Dream.
Dear Doctor Salk,

It’s a steamy summer day.
I remember a day like this more than a half century ago
When I stood in line at City Hall
Watching other children get polio vaccinations.
I saw them grimace as needles pricked their arms.
I was afraid. Would it hurt? Would I cry when my turn came?

I neared the table that held a tray of hypodermics.
A nurse daubed my arm with a cotton swab.
I closed my eyes, felt a stab of pain.
I walked away wondering if I would be safe now,
Protected from the dread disease
That could paralyze me.
Would I ever have to walk with braces on my legs?
Would I ever be trapped inside an iron lung?

Soon headlines shouted, “Polio Is Conquered!”…“Polio Routed!”
President Eisenhower presented you with the Medal of Merit
For your dedication to service.
He said he had no words to thank you.
You had worked endless hours, sacrificed—not for money…not for fame…
But for the good of mankind.
When asked who owned the patent on your vaccine, you replied,
“There is no patent. Could you patent the sun?”

I needn’t have wondered or worried that summer day at City Hall.
I was immunized against the virus that had crippled so many.
I have no words to thank you, Doctor Salk.

Here are the poets of Dare to Dream…Change the World:

Click here to read more about Dare to Dream at Jill Corcoran’s’s blog.

I, too, remember that fear. It seems so long ago now...but your marvelous poem brings back the wonder of the moment when that terrible cloud was lifted. And, congratulations on the inclusion of your poem in such an uplifting collection!!

Thanks, Tara! I'm glad I read your poetry post today. I had never heard about the "Poetry Pairings." I've got to check them out.

I'm glad that you posted this one of your MANY drafts of Salk poems. I liked so many of those drafts--and I do think that you could write the definitive children's picture book or poetry collection about the subject!

Working on this project was definitely a learning experience for me. I found out a lot about Salk from the research I did. I'm so happy that I got to partner with you. See you in Chicago!

Congratulations, Elaine! What a wonderful tribute to Dr. Salk. The way you went back and captured this snip of your own - and the world's - history is just what we should do with our students. So effective and moving in the way it brings a moment to now. I love his words too..."Could you patent the sun?" Wow. I'm excited for this anthology! A.

I love how you mixed memory and research and history in this poem. And smiled at Janet's comment. Oh those drafts.But I expect quite a few laughs were had working with Janet! I'm glad you posted this here, and will look forward to what sounds like a most amazing book.

Lovely--that is so cool that you were able to write a poem about a person/event that you really connected with personally.

I'm really excited to be in this anthology with you!

Congratulations!! This collection sounds amazing. What a line-up!

Enjoyed your poem, as Laura said, the personal connection adds another layer of meaning.

What an inspirational story - I'd never even heard of the inventor of the polio vaccine before. Excellent stuff - thanks for sharing!

Thanks, All! I've been busy babysitting a lot lately...so I haven't been blogging or blog visiting as much lately.

I'm looking forward to seeing you again at NCTE in Chicago.

Will you be at the NCTE Annual Convention next week?

I'm very excited about this anthology - and what company we're all keeping!!

Congratulations Elaine! What a truly inspirational project. I remember those polio sugar cubes too. Your poem really brings it home.