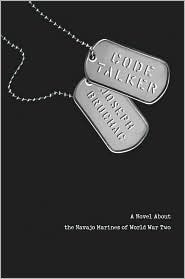 Code Talker
A Novel About the Navajo Marines of World War Two
Dial, 2005 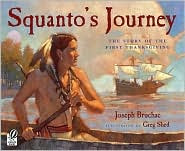 This picture book is excellent for reading aloud in the elementary grades. Bruchac narrates the story in the voice of Squanto (Tisquantum), a Patuxet Indian. The book opens with Squanto telling about his capture by Captain Thomas Hunt who took him and other Patuxets to Spain to be sold as slaves in 1614, how Spanish friars set Squanto free and helped him to get to England, and his return to America in 1619 when he found that his people had been devastated by a disease. In the rest of the book, we learn about Squanto’s building a friendship with the Pokanokets and Nemaskets; Samoset, a Pemaquid Indian; the arrival of the Pilgrims on the Mayflower; and the relationship between Squanto and the English that helped the settlers at Plimoth make it through their first year in the New World. Includes an author’s note and a glossary. 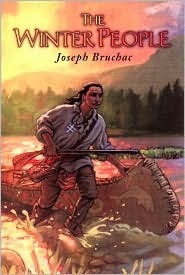 Set during the French and Indian War, this exciting story tells about a fourteen-year-old Abenaki named Saxso whose village of Saint Francis (Odanak) is burned to the ground by the British. Saxso’s sisters and mothers are taken captive. With his father dead, Saxso takes it upon himself to track down the British raiders and bring his family back home. Although Saxso is a fictional character, the story is based on an event that occurred in October of 1759 when “Major Robert Rogers led a force of 200 men, some of whom were Stockbridge Indian scouts, in an attack on Saint Francis.” Includes a map and an extensive author’s note. 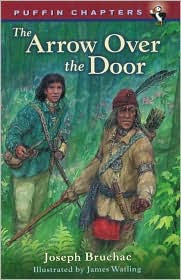 The Arrow over the Door
Illustrated by James Watling
Penguin Putnam, 1998

This historical novel is based on the “Saratoga Meeting” or “Easton Meeting”—an event that occurred in 1777 between a group of Abenakis and Friends at a Quaker Meetinghouse just before the battle of Saratoga in New York. The Abenakis arrived to find a congregation of peaceful people and embraced them as friends. The Arrow over the Door is told in alternating chapters by fictional characters Stands Straight, a young Abenaki, and Samuel, a Quaker boy. Both boys are changed by their encounter with each other that day. 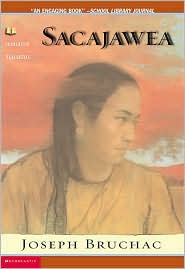 Sacajawea
The Story of Bird Woman and the Lewis and Clark Expedition
Scholastic, 2000
This is a well-researched and informative historical novel about the young Shoshone who served as a translator, peacemaker, and guide for Lewis and Clark on their historic expedition. The book is told in alternating first person narratives by Sacajawea and William Clark. Includes a map, author’s note, and selected bibliography.
***************
Previous Posts from Wild Rose Reader
Posted by Elaine Magliaro at 10:50 AM

I interveiw Mr. Bruchac several years ago for an article I wrote for Potato Hill Poetry. He was so nice, and very generous with his time. I never felt hurried during the interview. I have many of his books, but you intrcduced me to a few new ones here.

I invited Joeseph Bruchac to be a speaker for our reading council a couple of years ago. He was wonderful. He also spoke to the students in the children's literature course I taught at Boston University.

I like the traditional tales he has retold with his son Jim--especially HOW CHIPMUNK GOT HIS STRIPES. I arranged for Jim to be a visiting author in the school district where I taught. He was great, too.