It's that pumpkin time of year! I have reviews of two picture books and links to pumpkin crafts and activities for you.

Pumpkin Circle is a fine nonfiction book to read aloud to children in kindergarten through the early elementary grades. This book clearly conveys information about the life cycle of a pumpkin from seed into a fully matured fruit to decaying jack-o’-lantern to seedling through photography. Thaler’s close-up photographs of pumpkin seeds, seedlings, roots, leaves, tendrils, buds, flowers, and rind are exceptional. The spare text is at the same time factual and lyrical. Although the book may have read better had the author not tried to rhyme the text, there is still much to commend in Levenson’s writing.

The first page of the book:

Deep
within
each
pumpkin
the air
is damp
and cool.
The walls
are
lined
with
teardrop seeds,
each one
a slippery jewel.


From a description of the plant’s leaves:

Pumpkin Circle isn’t a typical nonfiction book. The text reads like a book-length poem, albeit with imperfect rhymes. Still, I think, it lends itself well to reading aloud to young children--and to introducing them to figurative language. For sure, even the youngest non-readers could learn much about the life cycle of a pumpkin just from browsing through the book and looking at Thaler’s photographs. 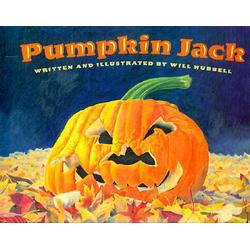 Pumpkin Jack is a title that I would describe as a “realistic fiction” picture book. The book’s story explains the life cycle of a pumpkin--but this tale starts with the decomposition of a jack-o’-lantern named Jack--one carved by a young boy named Tim.

After Halloween, Tim takes Jack outside and leaves him in the garden. After a time, Tim notices that Jack is beginning to shrivel. Then he sees that mold has spread over Jack's “bright orange skin.” Jack grows flatter and flatter…and then is cloaked beneath a layer of snow. Winter passes, March arrives, and the snow melts. Tim observes that there is little left of the pumpkin--just crumpled skin, a stem, and a few seeds. Tim scrapes a layer of dirt over Jack.

But when spring turns “barefoot warm, a tiny seedling appeared where Jack had been.” Sure enough, one of the pumpkin’s seeds has sprouted. Tim weeds and waters the plant and watches it grow from a sprout to a “web of vines.” Days grow warmer still--and flowers appear on the pumpkin plant: “Flowers opened on the plant each morning, yellow stars that twisted shut forever in the afternoon.”

In time, Tim finds “a little green ball growing behind a crumpled blossom.” He’s excited. The pumpkin plant continues to grow. Then, one October morning, Tim awakes to see frost coating plants in the garden. Upon his return from school that day, Tim searches through “the withered leaves for the unripe pumpkins.” He picks them and puts them on his front porch. By the end of October, the pumpkins have ripened. Tim gives all but one of them away. He carves the one he keeps…another pumpkin he calls Jack. A year has come full circle.

Hubbell’s illustrations done in colored pencil with solvent washes are colorful, effective, and strongly support the realistic tone of this nature-themed story about decomposition and rebirth.

From Scholastic: Observing the Pumpkin Cycle

From Education World: Pump Up the Curriculum with Pumpkins!

Yes, I love those books in my library, too. And excellent websites, thanks.

I wish I could figure out how to insert pictures in the middle and bottom of my blog, like you just did. Love your last pumpkin picture.

Don't forget that crafts and activities for holidays can also be found in books about the holiday. For example, in the book -- The Halloween Book of Facts and Fun.

There's a particular icon on blogger. You click on it and then insert a photo, image of a book cover, or piece of clip art. You can upload them from your computer and place them to the left, right, or center of your blog. You can also click on the inserted images and drag them down the page.

I remember purchasing your book TO FLY for my elementary library when I was working as a school librarian.

Regarding craft books: I don't recommend books that I haven't read--but your book sounds like one that would be great to include in an elementary school library collection. I couldn't keep my Halloween books on the shelf in October!

Wow! It worked. It took a minute to figure out which of the three groups of picture HTML junk belonged to the picture of Michael Phelps I wanted to move. Then I highlighted it, clicked, and dragged. And it worked!

Thank you, Thank you, thank you!
I don't know how many times I've asked people, but you are the first person who actually answered and explained it.