Children's Literature and Teaching about Diversity

I have found it difficult recently to focus my mind on blogging about children’s literature considering everything that’s transpired in the past couple of weeks during the presidential campaign. I have been truly disturbed by the tenor of some of the campaign rhetoric that appears to have incited some individuals to outwardly express racist and divisive sentiments.


I found this video (Muslim McCain Fans Confront Intolerance at Rally) at the Huffington Post Monday morning. It inspired me to write up the following post:


Several years ago I attended a children’s literature conference in Maine. There, I met Suzanne Fisher Staples, the author of the Newbery Honor book Shabanu, Daughter of the Wind. Staples had at one time served as a UPI correspondent in Asia in Afghanistan, Pakistan, and India. During her presentation at the University of Southern Maine, Suzanne talked about her experiences in Afghanistan and showed slides that she had taken while stationed in that region of the world. That night, I had dinner with Suzanne, Brian Pinkney, and Sue Sedenka, the organizer of the conference. It was interesting to hear Suzanne’s perspective about the people she had met and gotten to know when she worked as a correspondent and about what she had learned about the kinds of lives they lead. 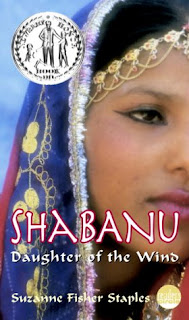 Suzanne wrote a Compass Points piece entitled Tolerance Is Not Enough for the November/ December 2001 issue of The Horn Book Magazine. It was required reading for the students who took the children’s literature course that I taught at Boston University for several years. I’d like to post some excerpts from Suzanne’s piece and to provide you with a link to the full text of the article at The Horn Book Web site.

From Tolerance Is Not Enough
by Suzanne Fisher Staples

Among the many things I learned living in that part of the world is that Christians and Jews and Muslims have a lot more in common than they have differences. The Koran is much like the Bible and the Judaic scriptures in its prescriptions for how people ought to behave toward one another.

From hours of sipping tea around fires in camps all over rural Pakistan and Afghanistan, I have also learned that relatively few Muslims are fundamentalists. They abhor terrorism and are more often victims of it than we are. Muslim terrorists are not regarded as religious martyrs but as fanatics who use religion to justify political acts.

I began to think then of story as a way of providing insight into the lives of people from other cultures, because story is based on the stuff of the human heart. Story shows what we have in common, not what separates us. That was when I decided I wanted to write fiction.

We in America pride ourselves on tolerance, but we must learn quickly that tolerance is not enough. It is diversity that must be embraced and celebrated if this madness is ever to stop. Diversity can fill us with surprise and touch us with familiarity. It is the richness of life, and is not to be feared.

You can read the full text of Staples’ piece here.

Message to Sarah Palin, Nancy Pfotenhauer, and Michelle Bachmann: I’m a registered Democrat; I live in a city in Massachusetts, the bluest of blue states; I’m a real American…and I'm pro-American!!!

Posted by Elaine Magliaro at 1:30 AM

You should check out Storybox. They are great for Kids aged 3-6 and have a drawing competition on this month!