Under the Snow: A Nonfiction Picture Book Review 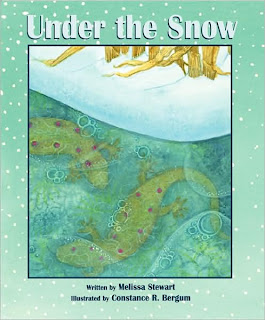 Under the Snow
Written by Melissa Stewart
Illustrated by Constance R. Bergum
Peachtree, 2009

When it’s cold outside and snow blankets the ground, it may appear that there’s little animal life around. But appearances can be deceiving! Just because we can’t see something, it's not proof that “something” isn’t there. Because…under the snow—tucked into gaps in stone walls and in underground burrows and inside rotting logs and beneath layers of fallen leaves and buried in the mud at the bottoms of ponds—many animals spend the winter unseen by human eyes.

Melissa Stewart’s nonfiction picture book is about the animals that are resting/sleeping/living somewhere “under the snow” hidden from view during the coldest months of the year.

This large format book with spare text and realistic watercolor illustrations is lovely in its simplicity. It is an excellent book to read to young children as an introduction to hibernation.

Here’s how Stewart begins the book:

You spend your days sledding and skating
and having snowball fights.

But under the snow lies a hidden world.

Then author Stewart takes us on a tour of a field, the forest, a pond, a wetland, and tells us what animals are hidden there “under the snow” in those four different habitats. And illustrator Bergum shows us those animals, which include the following:

Art and text work perfectly together to “show-and-tell” young readers about the many forms of animal life that lie in a hidden world “under the snow.”

Under the Snow was designated an NSTA/CBC Outstanding Science Trade Book for 2010 and a Bank Street College Best Book of the Year. It was cited by the 2010 Charlotte Zolotow Award Committee as a highly commended book. It was also a Massachusetts Book Award Finalist and a Junior Library Guild Selection.

Oooooh! It's so cold here today that everyone is home from school! Not snowy, just cold. And so this is the perfect book for such a day. It looks delightful; I love books that peek into secrets. It's tough to believe that anything is alive out there today. We even let the outdoor kitties in! A.

It's freezing here today too! I went to the drive-up window at my bank this afternoon and pressed the button to open my car window. It was frozen and the window came off its track and I couldn't close it again. I had to drive into a parking lot and fool around with the window--with no gloves on-- until I got it back in place.