I'm living in a world of white. We've had a lot of snow here recently. I took these pictures during our snow/rain/sleet storm on Tuesday and this morning. 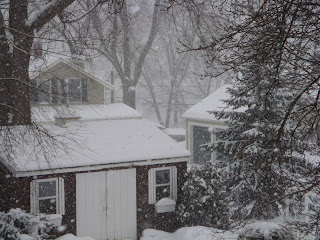 I was inspired to write a poem about the snow/a snowstorm on Wednesday. Then I remembered the beginning of a snowstorm poem that I had written decades ago. I composed a new poem in my head using what I could recall of the old poem while I was taking a shower that morning. Later, I looked through my folders and found Lion in Winter, the poem that I had written so many years ago. In that poem, I compared a winter storm to the king of beasts. Here it is:

Lion in Winter
The winter storm will
rage and roar,
scratch its cold claws on the door,
race around on frosty feet,
snap at autos in the street,
shake its snowy mane and growl--
A silver lion on the prowl
that bites your face with bitter chill
and preys upon the land until
the last of autumn's blazing gold
is quelled beneath its icy hold. 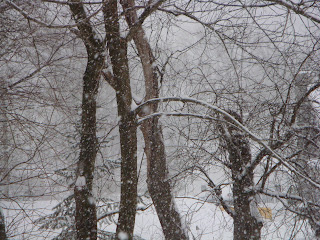 And here is the poem that I wrote on Wednesday morning:
This Winter Storm (I)
This winter storm will rage a roar,
Scratch its cold claws on our door,
Race around on frosty feet,
Howl at autos in the street,
Prowl around outside all day.
I’ll have to stay inside and play.

But I won’t have to go to school.
This winter storm is REALLY cool! 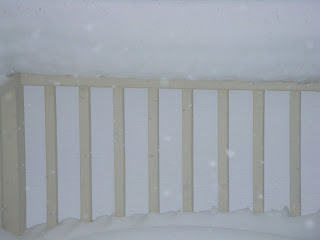 Question: Which version of my snow poem do you like better?
***************
It's snowing here again today...so I decided to write another version of This Winter Storm.

This Winter Storm (II)
This winter storm will rage and roar,
Pile up snow drifts by our door,
Howl and growl with all its might,
Bury everything in white,
Bend the branches of our trees,
Snap electric lines with ease,
Slow car traffic,
Close all schools.
Hip, hip, hooray!
This snowstorm rules!!!
********************
Tara has the Poetry Friday Roundup at A Teaching Life.

At Blue Rose Girls, I have an original fairy tale poem titled For Sale.
Posted by Elaine Magliaro at 9:34 AM

That's a fun comparison, Elaine! The first one is my favorite.

Enjoy your world of white.

The white is getting deeper and deeper by the hour!

I have to go with Lion in Winter, as well. It certainly fits today in New Hampshire!

I spent New Year's weekend up near Franconia Notch in New Hampshire. The day we arrived it was in forties. It rained in the White Mountains that weekend and snowed in Los Angeles! Go figure.

It was fun to read both and compare - but the first one was my favorite. The photographs were lovely, too - I've had it with the snow!

At least the sun is out today. Still, it's really cold. I think the snow is going to be around for a LONG time.

I like the first for me and the other two for kids!

Horribly cold here, too, today. And the snow will be with us for a while and will be covered up by the next brutal snowstorm predicted for Tuesday. Like some other commenters, I like Lion in Winter best, too!

These are all fun, Elaine--I *can't* believe you could remember that much of a poem written decades ago. That astonishes me.