Here are three picture books in verse that I highly recommend. The books have wonderful illustrations that add to the charm and telling of the stories. I just didn’t have time to write about the artwork. 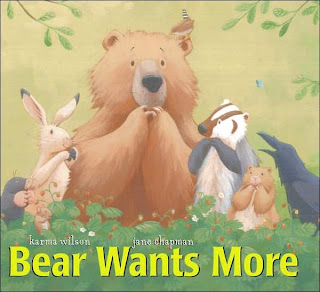 Bear Wants More is a terrific picture book to read aloud at the beginning of spring. In this fine follow-up to Bear Snores On, we find Bear awaking and feeling famished when springtime arrives. Bear leaves his den and looks for food.

He waddles around
and roots all around.
He digs and he paws
fresh shoots from the ground.

He nibbles on his lawn
till the last blade is gone.
But
the bear
wants more!

So bear keeps looking for more...food.

Mouse scampers by and suggests Bear accompany him to Strawberry Vale—where Bear eats and eats and eats…and STILL wants more!

Then Hare comes along and all three animals scoot on over to a clover patch—where Bear nibbles and crunches on his lunch…but he STILL wants more!

Next, Badger shuffles by and takes the animals to an “ol’ fishin’ hole”—where Bear catches fish…and, yes, he STILL wants more!

Meanwhile…Gopher, Mole, Raven, and Wren are back at Bear’s den—decorating it and baking honey cakes for a springtime party for their big friend. Bear smells the scent of something delicious blowing in the breeze. He follows his nose back to his lair—but he’s eaten so much that he can’t fit through his front door. He gets stuck!!!

Badger pries Bear loose with a stick. The animals have their party for Bear outside his lair. Bear’s not finished eating yet. He STILL wants more!

Bear opens presents;
he gobbles honey cakes.
He eats SO much
that his big tummy aches.

He snuggles in the grass
And he snores big snores.
He is full, full, full…
but
his friends
want more! 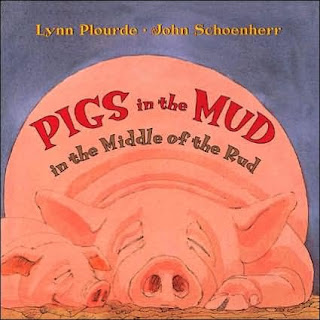 Pigs in the Mud in the Middle of the Rud
Written by Lynn Plourde
Illustrated by John Schoenherr
Down East Books, 2006
(Originally published by Blue Sky Press, 1997)

Spring is a muddy season here in the Northeast. Maine author Lynne Plourde wrote this winner of a read-aloud book that was a favorite with my elementary students. Pigs in the Mud in the Middle of the Rud is a wonderful rhyming picture book with a refrain that invites participation by young children.

The Story: A family—Mama, Papa, Brother, Sister, and Grandma—are riding along in their Model T Ford after a pouring rain. Of course, the dirt road they’re driving on is now mostly mud. But mud isn’t their only problem—it’s the animals in the mud in the middle of the rud that really impede their travel.

Here’s how the book begins:
It had rained. It had poured.
Now a Model T Ford
was stopped in the rud
by some pigs in the mud.

“Pigs in the mud!”
Grandma said.

But the pigs didn’t budge.
Not a tiny little smudge.
That, my friends, is the template for the rest of the book. Next, Grandma spies hens in the mud—and Sister attempts to shoo them from the road. Then Grandma sees sheep and Mama tries to shoo them away. Finally, the old gal hollers that there are bulls in the rud and Papa tries to shoo them from the mud. Unfortunately, Brother, Sister, Mama, and Papa aren’t successful at shooing away the farm animals. So…the job is left to Grandma. She takes charge like a staff sergeant. She puts her hands on her hips—and with a snarl on her lips—she yells at the animals in the mud at the top of her lungs…
“TIME FOR SUP!”

And, man, do the pigs, hens, sheep, and bulls take off! No more animals in the mud in the middle of the rud thanks to Grandma.

But look! What’s that a lyin’ in the mud? Heck, it’s Grandma. That’s okay. She’s not flustered at all!
With her dress all rumpled,
and her bonnet all crumpled,
and muddy, head to toe…
Grandma said,
“Time to go!” 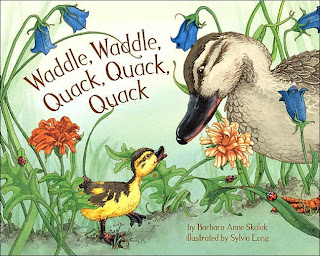 This is another great read-aloud for preschoolers and kindergartners. It would also be a good bedtime book. It’s a story about newly hatched ducklings. Mama takes her ducklings to the lake for a swim. She shows them how to put their heads down under the water for tasty pondweeds. After Mama and her children have finished eating, one of the ducklings drifts off in the reeds. He looks around—but can’t see Mama! He hears thunder crashing. Storm’s coming. The lake is getting rough. The little duckling searches for his mother. He crosses the meadow and goes looking in the grass, near the daisies, up the hill, in a log—but no Mama!

The clouds begin to disappear. The sun comes out again. The little lost duckling heads back to the lake.

Through the shallows to the deep.
Calling mama, peep, peep, peep.
“I’m here!” cries Mama. Quack! Quack! Quack!
“And here you are! You made it back!”
Mama’s other children are happy to see that their lost brother has returned. Dusk is coming on. Mama leads her babies back home--and admonishes them not to roam off alone.

Safe inside their cozy nest,
tired ducklings—time to rest.
Fluffy puffs of gold and brown,
preening, dozing, nestled down.

The Poetry Friday Roundup is at Some Novel Ideas.
Posted by Elaine Magliaro at 8:27 AM

What fun books, Elaine. Loved how you described them :). I feel very lively and springy now. Thanks.

These books are really great read-alouds. My students LOVED "There's a Pig in the Mud in the Middle of the Rud." And I had a grand time reading it to them.

Oh thanks! Will have to find some for my girls. We only have one of those bear books, but they love that character.

These books are as cute as can be. Thanks for highlighting them!

One of my favorite read-alouds is Piggy in the Puddle by Charlotte Pomerantz--there's just something about mud stories that is really appealing!

I loved BEAR SNORES ON! It was a favorite read-aloud in my library. I think WADDLE, WADDLE, QUACK, QUACK QUACK would make a nice baby gift. Love Sylvia long's illustrations!

My students and I had such fun reading THERE'S A PIG IN THE MUD IN THE MIDDLE OF THE RUD when I was a school librarian. They always helped with the refrain--while shaking their heads and doing hand gestures.

Sorry to say I have never read PIGGY IN THE PUDDLE. I just looked it up on the Internet. It sounds like my kind of book! Thanks for the recommendation.