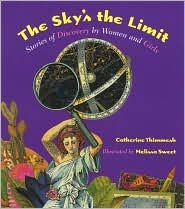 The Sky’s the Limit: Stories of Discovery by Women and Girls
Written by Catherine Thimmesh
Illustrated by Melissa Sweet
Houghton Mifflin, 2002

Chapter Three provides brief glimpses of inquisitive young girls who thought outside the box. The back matter of The Sky’s the Limit includes a Selected Timeline of Discoveries by Women from the 1300s to 2000 and Web site resources.

Look Inside the Book ... 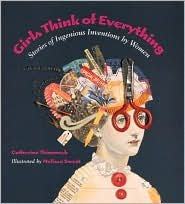 Girls Think of Everything: Stories of Ingenious Inventions by Women
Written by Catherine Thimmesh
Illustrated by Melissa Sweet
Houghton Mifflin, 2000

The sections about the women inventors are concise and filled with interesting information about their inventions—some of which came about by accident…like chocolate chip cookies and Scotchgard.

The book ends with the section called Girls (Even the Young Ones) Think of Everything. In this section, you can read about Becky Schroeder, a ten-year-old girl who “created a tool that enabled people to write in the dark.” The tool is called the Glo-sheet. You’ll also find out about the no-spill feeding bowl invented by eleven-year-old Alexia Abernathy.

Look Inside the Book ...

Posted by Elaine Magliaro at 2:18 PM

2 thumbs up for your blog! I loved the way you have discussed issues relating to Amercian women inventors.

Thanks for this great resource, women inventors and inventions should get a proper name and a proper place to show their invention.