It's still winter--that's for sure. Here are some short reviews of poetry books about winter activities and winter weather...in case you're looking for some poems about the coldest season to share with children. 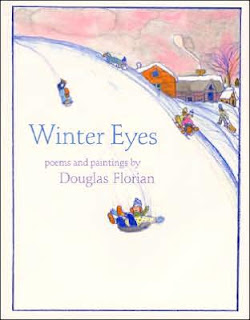 Winter Eyes is one of my favorite Douglas Florian books. It was also a poetry favorite in my elementary school library. The collection contains twenty-eight poems about all kinds of wintertime subjects—sledding, icicles, ice fishing, animal tracks in the snow, sugaring time, ice skating, animals in underground burrows, and cabin fever. It includes concrete and list poems. Most of the poems are short, rhyming, rhythmic..

The first poem in the book, Winter Eyes, begins this way:
Look at winter
With winter eyes,
As smoke curls from rooftops
To clear cobalt skies.


In The Winter Sun, Florian personifies the star of our solar system. The sun’s “a grumpy guy” who “doesn’t speak.”

He hovers near the naked trees,
His blanket from the sky’s big freeze,
And barely dares to lift his head
Before he’s ordered back to bed.
Winter Eyes is a poetry book that's fun reading from cover to cover. 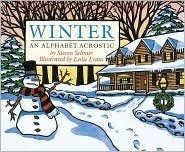 This is the last in Schnur’s series of seasonal acrostic books. Both Schnur's poems and Evans' hand-colored linoleum block print illustrations evoke the chill of winter out of doors and the warmth and coziness of sitting by a fire or snuggling on a couch under a blanket indoors in winter. The book opens with a poem about the beginning of a new day:

At dawn, a thick
White frost covers the lawn
As the steaming
Kettle whistles
Everyone up.

Outside it’s C-O-L-D!
Crystals
Of ice as delicate as
Lace ring the
Duck pond.

The poems gives readers a good overview of the winter season.There are acrostics about deer in an orchard, a flurry of snowflakes, a father gathering kindling, hibernating animals, pine trees in moonlight, ice skating, and boiling vats of maple sap. The collection closes with a few poems about the end of winter and coming of spring.

You can view three of the interior illustrations from the book here. 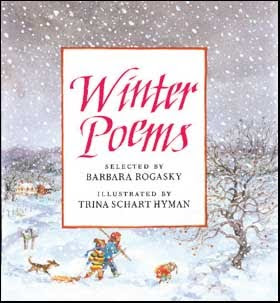 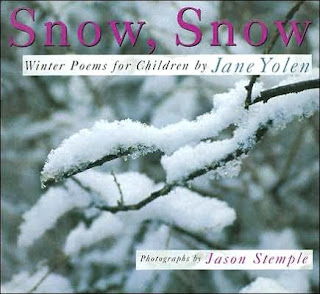 Pictures of snow that her son Jason Stemple took in Colorado served as Yolen’s inspiration for the thirteen poems in this book. The collection begins with the poem What’s Left of Fall and a picture of fallen leaves covered with snow crystals. Here are the first six lines of the poem:
Crisp leaf litter
Under snowy glitter;

Crumpled and brown
Letters thrown down;

The last bit of shade
From autumn’s parade

Subjects of other poems in the book include a skiing, snow on the trees, a snowmobile, footprints in the snow, and a river wrapped in “ermine robes.”
Snow, Snow closes with A Cold Finger—the finger being the “mittenless” branch of a tree that is pointing the way toward spring. 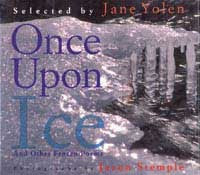 For this anthology, Jane Yolen asked a number of poets “to look at Jason Stemple’s eerily wonderful photographs of ice formations and write whatever the photos inspired." Poets whose works you’ll find in this book include Kathi Appelt, X. J. Kennedy, Mary Ann Hoberman, Ann Turner, Lee Bennett Hopkins, J. Patrick Lewis, Nancy Willard, and Jane Yolen. The poems are written in a variety of styles. Some are filled with imagery; some are rhythmic and rhyming—like Mary Ann Hoberman’s poem Ice Cycle:

I’ve always thought it rather nice
That water freezes into ice.
I’m also pleased that it is true
That ice melts back to water too.
But even so I find it strange
The way that ice and water change
And how a single water drop
Can fathom when it’s time to stop
Its downward drip and go ahead
And start an icicle instead.
Jason Stemple's photographs are sure to send chills down readers' spines. The book is a lovely pairing of poetry and pictures.
********************

At Political Verses, I have a kind of anti-valentine poem titled Look at the Man: A Poem Explaining Why Women with Mates Gain Weight.
At Blue Rose Girls, I have a humorous poem by Ogden Nash titled Common Cold.
Lee Wind has the Poetry Friday Roundup at I’m Here. I’m Queer. What the Hell Do I Read?

Posted by Elaine Magliaro at 10:04 AM

Thanks for spotlighting these titles. Love Doug's grumpy sun poem :)!

What a nice selection here, Elaine. Thank you!

During my first year as school librarian, the fourth graders fought over Florian's book WINTER EYES.

Thankfully these poetry books are still in print.