A Tortoise Acrostic & Fables in Verse

Check out Tricia’s Monday Poetry Stretch - Acrostics at the Miss Rumphius Effect. Here is my “Aesop’s Fable” acrostic, TORTOISE. I’ve also included a couple of recommendations for two children’s pictures books that have fables written in verse. You can read the Poetry Stretch Results here.

Old One. Hare is

Resting beneath a willow

Of the finish line—dreaming he is champion.

It is not to be, Old One. You are wise and know

Slow and steady wins the race 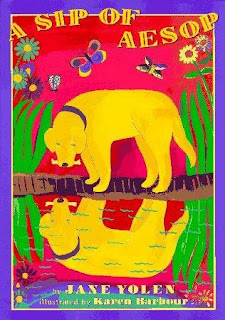 A Sip of Aesop
Written by Jane Yolen
Illustrated by Karen Barbour
Scholastic, 1995

Yolen retells thirteen fables in verse in this book that provides us with just a “sip” of the more than two hundred moralistic tales attributed to Aesop. The morals of the fables—which include The Hare and the Tortoise, The Lion and the Mouse, The Fox and the Grapes, and The Grasshopper and the Ants—are also written in rhyme. Yolen’s verses scan well and are fun to read aloud to children—especially those who are familiar with fables.

Here is an excerpt from The Mice and the Council and its moral.

The mice called a meeting
At which they all sat
Discussing the way
To get rid of their cat.

“Poison!” one cried.
(A real silly suggestion.)
Hanging and shooting
Were out of the question.

To make a good plan
Is but half a solution.
How close are the words
Execute—execution.

Yolen includes a bit of information about Aesop in the back matter of the book.

Barbour’s illustrations are bright and saturated with color. They provide a fine complement to Yolen’s “fabulous” verses. 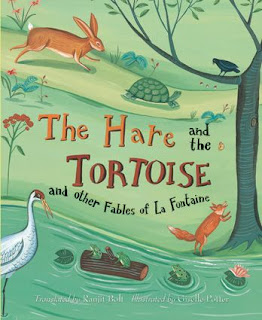 The Hare and the Tortoise and Other Fables of La Fontaine
Translated by Ranjit Bolt
Illustrated by Giselle Potter
Barefoot Books, 2006

Jean La Fontaine was a French poet who lived from 1621-1695. He is best known for the fables he wrote in a series of twelve books. He adapted his poetic tales from fables by Aesop as well as fables from the Panchatantra.

This book includes a number of familiar fables: The Hare and the Tortoise, The Town Mouse and the Country Mouse, and The Grasshopper and the Ant. It also contains some fables that are less well known: God and the Animals, The Pumpkin and the Acorn, and The Bat and the Weasels.

All the fables in the book are written in a series of rhyming couplets. Here is an excerpt from The Grasshopper and the Ant as an example:

The grasshopper had sung his song
All the delightful summer long
Instead of gathering in supplies.
Now only did he realize,
With winter coming on, that he
Could not have supper, lunch or tea!
He couldn’t find a scrap of food,
The cupboards in his larder showed
Not even one small worm or fly.
He had it, he was high and dry.


Giselle Potter’s spare, stylistic illustrations, done in gouache, serve as a fitting backdrop for the moralistic tales. They never intrude on the text; they enhance this fine compilation of translated fables in verse.

MORE FABLES
Aesop’s Fables from the University of Massachusetts
From the website: Since 1994 Professor Copper Giloth has assigned her students in Art 271, Introduction to Computing in the Fine Arts, the task of illustrating the traditional Aesop's fables alongside their own retellings of the fables in a modern setting. This collection gathers together artwork from several semesters.

Here are links to two different versions of The Hare and the Tortoise:

At Political Verses, I have poems from Frances Richey’s book The Warrior: A Mother’s Story of a Son at War. The post includes a video of Richey and her son speaking with Jeffrey Brown on the Online NewsHour Poetry Series.

At Blue Rose Girls, I have a poem by Jack Spicer entitled Psychoanalysis: An Elegy.

Tabatha A. Yeats has the Poetry Friday Roundup this week

Posted by Elaine Magliaro at 9:37 AM

Wonderful, Elaine. I always love it when you treat us to your original poetry.

Do you know I still haven't seen that title illustrated by Giselle Potter? I gotta fix that. Thanks for the other recs, too!

I feel like the advice ("Take it easy/Old One") is good advice for me right now!

Jules,Potter is one of my favorite picture book illustrators. She has her own distinct style.

Thanks, Marinela, I appreciate your comments.


Mary Lee, I'm definitely an "old one." But still havin' fun at sixty-two!

Elaine, wonderful acrostic! I love the image of Hare dreaming under the willow tree.

And I've never seen that Yolen title before. A new (old) one for me to seek out. Thanks!

You have really great taste on catch article titles, even when you are not interested in this topic you push to read it