Millions of American kids live in big cities. Certainly, there are picture books and fiction books aplenty that are set in urban areas. There are, however, few poetry books for children that celebrate city life. I thought it would be a good idea to review two such poetry books. The first is City I Love, a new collection by prolific anthologist and poet Lee Bennett Hopkins. The second is Sky Scrape/City Scape: Poems of City Life, an anthology compiled by Jane Yolen that was first published more than a decade ago. These are two fine poetry books that would be wonderful additions to classroom libraries—especially in schools situated in urban districts. 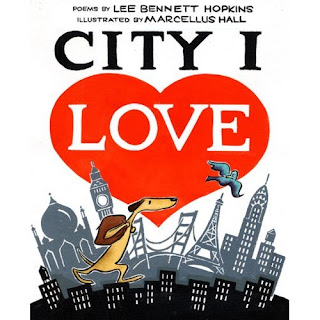 This collection fittingly opens with a poem called Sing a Song of Cities in which Hopkins explains that cities will sing back to us—“in subway roars and rumbles/people-laughs, machine-loud rumbles.” The anthology contains other poems about city sounds, including one in which a mother pigeon requests that the city silence its sirens and quiet its rumbling traffic so her newborn babies can sleep. Another is about a man selling hot dogs and cold drinks who shouts out to people to “Get ‘em here!”

There are also poems about someone trying to hail a cab in the rain, subways filled with many different kinds of people, a sturdy bridge, a hydrant, a sultry city in summer, snow falling in a city in winter, a seal in the city zoo—and one about men and women building a skyscraper. This last poem ends by describing how the ongoing construction appears to onlookers:

Why,
it’s like watching
a razzle-dazzle
razzmatazz
three-ring
steel circus
performance
appearing
in
the
sky.


Hopkins includes a poem about a kite in the city that “flitters/twirls/tumbles/twitters/like/a/young bird."

And there’s a poem about city lights that begins with lots of great verbs:


City I Love is a book of poems that truly conveys the sights, sounds, and awesomeness of the city as observed by someone who loves living in one.

The illustrations done by Marcellus Hall in watercolor and ink transport readers to cities in continents around the world—in North America, Europe, Asia, Africa, South America. Hall includes pictures of gondolas, buildings with onion domes, signs lettered in foreign languages, people of diverse cultures wearing a variety of clothing. He uses changing perspectives to capture the energy of city life. His illustrations complement and extend the poems in Hopkins's urban-themed collection.

NOTE: Children will have fun looking for the dog with a backpack in all of the book’s illustrations—beginning with the endpapers. The dog is on a world tour of cities by way of poetry and art in this excellent new book by Hopkins. 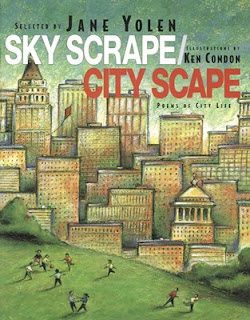 Jane Yolen did a superb job in selecting the twenty-five poems she included in Sky Scrape/City Scape. A good number of the poems are exceptional pieces originally published in collections that have been long out of print. In this anthology, you’ll find Judith Thurman’s Zebra and Oil Slick from Flashlight and Other Poems (1976); Lilian Moore’s Pigeons from I Thought I Heard the City (1969); Patricia Hubbell’s The Street Cleaner’s Lament from 8 A. M. Shadows (1969); Felice Holman’s The City Dump from At the Top of My Voice (1970); Myra Cohn Livingston’s 74th Street from The Malibu and Other Poems (1972); Leland B. Jacobs’s The Subway Train from Is Somewhere Always Far Away? (1967). These are poems that have stood the test of time—they are definitely not outdated.

Holman's The City Dump has been a favorite of mine for many years. Holman conjured up a lyrical poem about garbage in lilting language. Not the easiest thing to do! In it, she talks about the refuse that has been left at a dump—and about the gulls and mice that steal in and reap the remains of what people have discarded.

Here’s how Holman ends her poem:


In Pigeons, Lilian Moore laments how these birds spend their lives on concrete and cement. She writes:

A pigeon never sings
of hill
and flowering hedge,
but busily commutes
from sidewalk
to his ledge

Oh pigeon, what a waste of wings!


In Eve Merriam’s A Lazy Thought, a poem about adults rushing about the city, the writer ponders why adults don’t “ grow up” any more:

No wonder
Grownups
Don’t grow up
Any more.

It takes a lot
Of slow
To grow.

Lulled by rumble, babble, beep,
let these little children sleep;
let these city girls and boys
dream a music in the noise,
hear a tune the city plucks
up from buses, up from trucks…


Ken Condon’s colorful illustrations done in chalk and oil pastel have an impressionistic look that softens the hard edges and grittiness of some of the city scenes. Like Marcellus Hall, he also employs changing perspectives to capture the action and energy of urban life.

There are so many fine poems included in Sky Scrape/City Scape. They are gems that one is unlikely to find in most poetry anthologies for children that are still in print. They provide readers with a true “flavor” of the city. This book is definitely “a keeper.”

At Political Verses, I have Ramblin’ Prose, a song parody about Sarah Palin’s resignation speech.

At Blue Rose Girls, I have Otherwise, a poem by Jane Kenyon.

The Poetry Friday Roundup is at A Year of Reading.

Posted by Elaine Magliaro at 11:21 AM

Hi Elaine, I have Lee's City I Love but not Jane's book. Love those city poems! I don't think I've seen it before. I'm on my way to the book store now to order a copy! Hope you had a relaxing time in Maine.

Thanks...we had a wonderful time with some of our old high school friends up in Maine.

Yolen's book has some wonderful poems by gifted writers. I hope you like the anthology.

Both books look (and sound!) wonderful. Thanks!

Love City I Love. Will have to look for Jane's. Thanks!

I've been hearing so much about Lee Bennett Hopkins' new book, but I haven't seen it yet. Guess I need a trip to the bookstore! (or library!!)

im not much of a reader,but i can really envision the city. loved it.