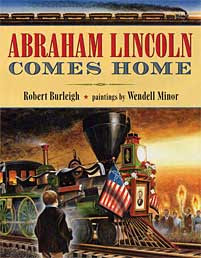 Abraham Lincoln Comes Home is a fine picture book to share with young children during the Lincoln Bicentennial Year. It does not focus on Lincoln’s life or his presidency. It’s a book that relates the story of a young boy named Luke and his father who ride off one night in a horse and buggy in order to pay their respects to our country’s 16th president as his funeral train passes through their community. This is a story of a father and son sharing an emotional experience during a tragic time in our country’s history.

The Lincoln funeral train traveled over 1,600 miles on its route from Washington, D. C., to Springfield, Illinois. The journey took thirteen days. Funeral services were held in different northern cities through which the train passed. At night, people lit bonfires along the train tracks.


As the book begins, Luke and his father are headed off into the night in their buggy:

The buggy rumbled past the barn and through the rusty gate. A single lantern dangled from the near side of the horse’s harness. The lantern cast shadows that rose and fell with each bounce. 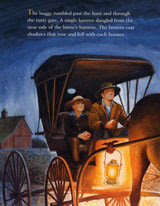 Along the way, Luke thinks about trains and the train carrying the dead president and about how he knew he would have liked Lincoln if he could have talked to Abe.

Luke and his father arrive at the train tracks—and thoughts turn to the funeral train and everything it had passed along the way. 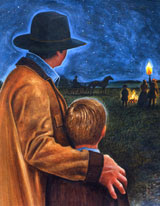 How far it had come! Day after day, night after night into morning. Past cities and towns with tolling bells. Past speeches and silence. Past black drapes, heaped roses, archways of green leaves, and the sound of muffled drums.

Finally, Luke sees the funeral train approaching with the picture of Abraham Lincoln above the cowcatcher. He feels the “ground shiver under his feet.” Then he glances up at his father and sees tears streaming down his cheeks. This is the first time the young boy has ever seen his father cry. The train rumbles on and then…

The noise faded. The prairie swallowed the clack-clack-click, all the way to nothing.

No one speaks. People are quiet for a while. Then, it’s time to go. On the ride back home, Luke snuggles “against his father’s warm shoulder” and falls asleep as the sound of the buggy wheels make “him think of the train wheels, still turning.”

Wendell Minor wanted to capture the closeness of a warm father/son relationship for this book so he used a real father and son as models for his paintings. Meticulous in his research for his train illustrations, Minor also had photographs taken of a scale model of the steam engine Nashville and Lincoln’s funeral car made by Professor Wayne Wesolowski. The train is in the permanent collection of the Abraham Lincoln Presidential Library and Museum in Springfield. 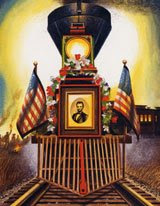 Wendell Minor's illustrations beautifully capture this historical event and convey the emotions and sorrow felt by Luke and his father. His paintings draw a reader “into” the story…and into this fictional boy’s experience of this solemn episode in our country’s past—especially the paintings of the buggy driving off into the distance under a star-strewn sky, Luke looking up at his father as tears stream down his father’s face, the funeral train rolling through the prairie just as pale light begins to spread across the horizon, and the image of Lincoln's face superimposed on the sky as Luke and his father head home. 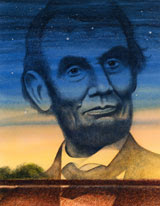 Abraham Lincoln Comes Homes is a quiet, spare, and, at times, poetically told tale. Wendell Minor’s paintings take us “there”—to the prairie in 1865 as Lincoln’s funeral train passed through our country and into the pages of history.


In the back matter of the book, Robert Burleigh includes an Afterword and Interesting Facts about the Lincoln Funeral Train that contain a wealth of information about the journey of train and other "truly interesting" facts related to Lincoln’s death and the train’s journey.


NOTE: I would like to send my heartfelt thanks to Wendell and Florence Minor for always responding promptly to my emails and telephone calls and to Wendell for giving me permission to post images of his illustrations from Abraham Lincoln Comes Home.
Posted by Elaine Magliaro at 6:10 PM

Thanks for this great review, Elaine. There are so many new books about Lincoln out, so it's nice to get a more detailed look at this one. I didn't know about the funeral train, and your description definitely makes me want to read this touching story of father and son!

ABRAHAM LINCOLN COMES HOME is another excellent picture book by Robert Burleigh and Wendell Minor. Wendell is one of my favorite artists. He is so adept at capturing a sense of place in his paintings.