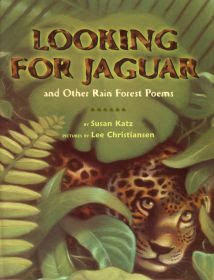 This poetry collection contains nineteen poems about plants and animals found in the rain forests of Africa, Asia, Australia, Costa Rica, Brazil, and Belize. In the poems, Katz writes about a jaguar hidden in the vegetation, a sloth with algae-coated hair, the goliath frog, the tiny royal antelope “with legs as thin as a pencil,” the okapi, piranhas, and other animals. She also writes about the sounds of the rainforest in Jungle Concert, the world’s biggest flower in Rafflesia, the Amazonian walking palm that can actually “walk” about ten feet toward a sunnier location in the course of a decade in Walking Tree, and about the creatures and “garden of flowers” that live high up in trees of the rain forest in the poem Canopy.

Rat-tailed, pig-nosed, rabbit-eared fellow
Stuck in a turtle shell, poor armadillo.
Warts on his tongue and plates on his back.
Maggots and worms are his favorite snack.

The larger he gets, the fewer enemies he has;
His hunger swallows tapirs, turtles, caimans, even humans.

Silently he glides away, a ripple in shadowed water,
Erasing all of himself except the shiver down my spine.

In About the Poems, Katz includes interesting tidbits of information about the animals and plants spoken of in her book. For example, she writes of the okapi: A resident of the African rain forests, the odd-looking okapi, though known by indigenous people for centuries, was believed by European explorers to be mythical until the early 1900s, when an okapi was finally “discovered” by Sir Harry Johnston.

The back matter also contains a section called About the Rain Forest, in which Katz provides information about different types of rain forests, the series of layers in such forests, the thick canopy through which only about 2% of the sun’s light can pass, and some types of “plants that grow on and among the trees.”

I’m sure Looking for Jaguar would be a welcome print resource in classrooms studying about tropical rain forests.

Note: The publisher thanks Dr. Scott Silver, Curator of Animals at the Queens Zoo, The Wildlife Conservation Society, for his kind assistance.

Something Extra
Looking for Jaguar: A Teacher’s Guide

Sea Stars is a poetry book in which photographs taken by Margaret Butschler served as inspiration for Avis Harley’s twenty-seven poems about different sea creatures--including the sea cucumber, beluga whale, plumose anemone, loggerhead sea turtle, giant Pacific octopus, sea otter, and blacktip reef shark. Harley's “saltwater poems” come in a variety of forms: shape, quatrain, tercet, list, haiku, limerick, cinquain, acrostic, and a nursery rhyme parody. Harley includes a section at the back of the book called Looking Deeper in which she provides information about the animals and the bull kelp pictured in the photographs.

Most of Harley’s poems are short and a number of them contain touches of humor--as does Young Prince Pinch, which accompanies a photograph of a galatheid crab:

I’m crazy about sea otters. One of my favorite poems in the book is Grab a Crab, a playful, rhythmic tercet with some fine alliteration. The poem was written for Butschler’s picture of a sea otter floating on its back in the ocean with a crab resting on its stomach.

After the shell-crushing crackle and crunch,
there’s nothing as yummy as fresh crab to munch
served on my tabletop tummy for lunch.

I have just one criticism of the book: I think the names of the different sea creatures should have been printed on the pages with the poems and photographs--and not just in the back matter. Still, Sea Stars is a children’s poetry book in which a writer adeptly used her poetic imagination and knowledge of marine animals to respond to some fine photographs of sea creatures taken by Butschler. Sea Stars would be a fine book to use across the curriculum.

Note: Author and illustrator include an acknowledgement to the staff of the Vancouver Aquarium.

Anastasia Suen has the Nonfiction Monday Roundup at Picture Book of the Day.
Posted by Elaine Magliaro at 11:05 AM

Wow. As usual, Elaine, you're introducing me to books I can't wait to read. These sound wonderful--right up my alley. Love the ending of that anaconda poem

I have so many children's poetry books that I sometimes lose track of some of them. I was looking through my library collection the other day when I decided to read through these two books again. I thought these collections would be good to use across the curriculum in elementary school. I know lots of teachers study rain forests and marine animals.

I loved your pictures of Scotland! You must have some wonderful memories of your trip.

On another note, I've tagged you for a meme back on my site...

I was just looking for Looking for Jaguar, as I have had jaguars on my mind. We just had a Rainforest Costume Party for my youngest, and he dressed as one...It (the book, not my son) looks great (my son looked cute)!

I also wanted to say thanks for my lovely prize poem book, which looks great too!