Dare to Dream…Change the World: A Poetry Contest for Kids 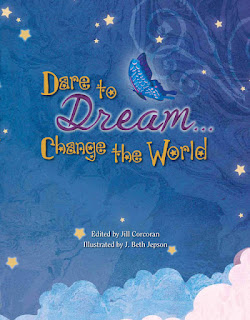 Back in 2011, I wrote a blog post about, Dare to Dream…Change the World, a poetry anthology that was to be published in the fall of 2012. The book was edited by Jill Corcoran and published by Kane Miller.
Here is Jill’s description of Dare to Dream from the book’s website:
Dare to Dream … Change the World pairs biographical and inspirational poems focusing on people who invented something, stood for something, said something, who defied the naysayers and not only changed their own lives, but the lives of people all over the world.
Janet Wong and I “paired” to write poems about the experience of an older woman who had contracted polio when she was young and Dr. Jonas Salk, respectively. I chose Salk as my subject because I remember how frightened parents were back in the 1950s that their children might contract the dread disease—one that had crippled so many. Highly infectious, poliomyelitis—also known as infantile paralysis—chiefly affected children.
Jonas Salk changed the world for me and millions of others when he developed a polio vaccine that was both safe and effective.
The Dare to Dream anthology also includes poems about other well-known "dreamers"--including Temple Grandin, Anne Frank, Ashley Bryan, Georgia O'Keefe, Christa McAuliffe, and Steven Spielberg.
**********
Last Tuesday, Jill announced The Dare to Dream…Change the World Annual Writing Contest for Students. Here is an excerpt from her announcement:


The Dare to Dream ... Change the World
Annual Writing Contest
for students grades three to eight will launch January 25th!


Grand prize winner receives $1500 worth
of Kane Miller and Usborne books
for a library of their choice
+
the top 30 poets will be published by Kane Miller Books
in a free e-book!


You can find out more about the writing contest at Jill’s blog or at the Dare to Dream website.

Thanks much for this, Elaine. Looks terrific, & I'll pass it along to colleagues.

Looks like this would really inspire kids to write, which is a great, great thing in my book.