In November: What Do You Do with a Book Like This? 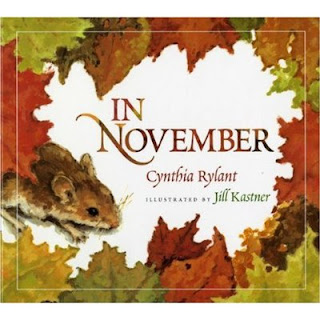 In November has a spare, lyrical text. It is not a storybook. It’s like a book-length prose poem that speaks to the essence of a month when the colorful beauty and fruitful bounty of the fall season is in the past. In the book, Rylant talks about snow blanketing the ground, trees that have lost their leaves, birds moving away for winter, animals sleeping more, food having an “orange smell” and tasting better, and people coming together to share a special holiday with each other. Rylant repeats the phrase “In November” several times in her text. This use of repetition throughout the book is one of the author’s writing techniques—along with the rhythm and flow of her evocative language—that helps her text read like poetry.

Here are some excerpts from the book to give you the “autumnal” flavor of In November:

In November, the trees are standing all sticks and bones. Without their leaves, how lovely they are, spreading their arms like dancers. They know it is time to be still.

In November, animals sleep more. The air is chilly and they shiver.
Cats pile up in the corners of barns.
Mice pile up under logs. Bees pile up in deep, earthy holes.
And dogs lie before the fire.

The book closes with my favorite passage:
In November, at winter’s gate, the stars are brittle. The sun is a sometime friend. And the world has tucked her children in, with a kiss on their heads, till spring.

Kastern’s full-color illustrations done in oil paints are as evocative of the month as are Rylant’s words. The uncluttered illustrations with changing perspectives and close-ups of leaves and birds and other animals draw a reader into the quiet text…into a “chilling” time of year when people and many animals draw into closer confines to keep themselves warm and to shelter themselves from the cold and long hours of darkness.

What Do You Do with a Book Like This?
Write a Collaborative Class Prose Poem
In November would be a great book to read aloud in the early elementary grades at this time of year—a book that could serve as a springboard for a creative writing exercise. So often children are asked to write about the signs of fall…but usually during an earlier part of the season when pumpkins and apples are growing plump and round in garden patches and orchards and trees are wearing leafy crowns of bright autumnal colors—or, in November, they’re asked to write about all the things they are thankful for as the Thanksgiving holiday approaches.

Why not lead students in writing a collaborative “In November” prose poem modeled after Rylant’s book? I would even suggest taking kids for a walk outside, on a hike in the woods, or on a field trip to an orchard or farm after the first reading of the book. Taking children outdoors to get in touch with the sights, sounds, and smells of November will help to get them revved up for writing.
I would read In November aloud a second time and then discuss with students the things that came to Rylant’s mind when she wrote about November. Next, I’d read the book aloud a third time slowly from beginning to end and ask children to listen carefully to the detailed/poetic language and figures of speech Rylant used in her text. Following that, the teacher could point out passages or a phrase or two from the book herself as examples.
For example:
Trees “spreading their arms like dancers”
About birds: “The air is full of good-byes and well-wishes.”
About the smell and taste of food in November: “It is an orange smell. A squash and pumpkin smell. It tastes like cinnamon and can fill up a morning, can pull everyone from bed in a fog.”
At Thanksgiving, people “talk by crackling woodstoves, sipping mellow cider.”

At this point in the process, the teacher and her students should be ready to start work on the first draft of their collaborative class prose poem. An easel, a pad of large chart paper, and a marker are all the supplies a teacher will need.
Writing the Class Poem: Ask children to think about the sights, sounds, and smells that come to mind when they think of the month of November. As children share, write down their responses on the chart paper—leaving large spaces between the responses. When the class has finished its rough draft, leave it up for a day or two to give children time to reread it, to suggest additions to the poem, and to think of more specific/detailed language and figures of speech that could be used when revising the class poem. The teacher can write down the children’s suggestions and ideas on another sheet of chart paper.
When the class is ready to write the second draft of their prose poem, the teacher can cut the different lines of the first draft into strips. This will make it easier for students to organize their poem. It will also make it easier for them to insert the words “In November” in several places in the text of their poem. Once the teacher and students have read through their prose poem together and determined that is ready for its final draft, the teacher should rewrite it on a new sheet of chart paper.

Suggestion for making illustrated In November Books: The teacher could type the entire prose poem on the computer—putting just one or two sentences on each page. The teacher could run off a copy of the poem for each student to illustrate. Students could design their own book covers. Finally, each student’s book could be stapled or bound together. Their In November books would be wonderful gifts for them to take home and to share with their families at Thanksgiving time.
Posted by Elaine Magliaro at 4:15 PM

Labels: autumn picture books, What do you do with a book like this?

Great idea! I could do that with my own kids. Sounds like a beautiful book.

Thank you for this! My mom is a 5th grade teacher, and I'm going to send her the link to this post!

This looks gorgeous! Will have to check it out.

I'm glad you like my idea. I did a similar writing activity with my second grade students using Rylant's book WHEN I WAS YOUNG IN THE MOUNTAINS. My students just changed Rylant's repetitive phrase and wrote individual books about their own lives--or one special event in their lives.

I hope your mother likes my suggestion for writing a collaborative class prose poem.