Autumn is my favorite season. I love it here in New England when the heat and humidity subside and cool, crisp days arrive. Soon the streets will be lined with broadleaf trees wearing crowns of red, orange, and gold. Everyplace I go will seem like another world.
POETRY COLLECTIONS 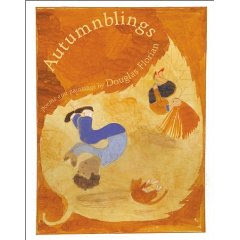 The collection concludes with NAUGHTUM, a poem that relates how The tress are bare./The birds have flown…./The leaves fall down/And then get burned,/As autumn slowly gets winturned. 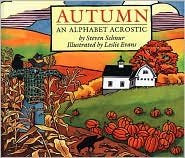 Like Douglas Florian, author Steven Schnur has also written a series of seasonal poetry books. Schnur’s books, though, contain only acrostic poems. In Autumn: An Alphabet Acrostic, he writes about acorns, corn, frost, leaves, pumpkins, ripe apples, and Thanksgiving guests--as well as topics associated with winter or no particular season: snow, icicles, the universe, the sound of a passing train, an owl out hunting, a mouse and a horse. While not all poems are lyrical in nature, it is the pairing of Schnur’s acrostic poems with Leslie Evans’s bold illustrations executed in hand-colored linoleum cut blocks that combine to make this book an attractive picture/poetry package.

Here’s one poem from the collection:

From the window the
Rows of
Orange pumpkins
Seem clothed in
Thin white shawls.

Classroom Connection: Teachers and students could compile a list of “autumn” topics to write acrostic poems about, which they could illustrate.


Here is my review of a poetry book that was previously posted at Blue Rose Girls: 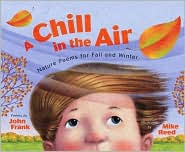 A CHILL IN THE AIR:
NATURE POEMS FOR FALL AND WINTER
Written by John Frank
Illustrated by Mike Reed
Published by Simon & Schuster (2003)

In A CHILL IN THE AIR, Frank’s poetry and Reed’s art work together beautifully to transport us, in words and pictures, from the bright colors and berry picking of early fall into the ice-blue cold of winter. Some of Reed’s uncluttered illustrations, rendered in acrylic paints, of freezing rain, icicles, a fox huddled at the mouth of a cave as snow swirls outside almost give me goose bumps. The text for the book, set in Highlander and Gill Sans, is large and bold and placed on each page so that the poems are easy to read.

Frank’s poems are straightforward—and most of them rhyme. His poetry doesn’t contain much imagery or figurative language. Frank does make use of personification in a few poems. Here’s an example:

The winter wind’s a clever thief:
He’ll join with you in play,
Then slip his hand inside your coat
And steal the warmth away.


And here is a shape poem from the book entitled Icicles:

A CHILL IN THE AIR is definitely a book of seasonal poetry I would want to have on hand in my elementary classroom to share with children during the autumn and winter seasons. 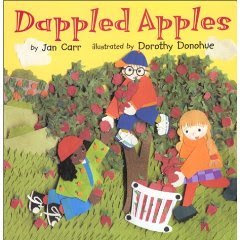 Dappled Apples is a prefect book to read aloud to children in preschool and kindergarten in the fall. The brief, rhyming text has a bouncy rhythm and some good use of vocabulary. Here are some examples of how Carr selected her words well and got creative with her rhyming lines about autumn leaves, apples, pumpkins, and kids dressed up for Halloween:

Rake a heap up
Run and leap up

Stack a mile up
Pumpkin pileup

There’s also some good use of alliteration. Note it in the following lines--as well as in some of the lines printed above:

Donohue’s colorful cut-paper collages are a perfect complement to Carr’s energetic text. Dappled Apples is a lively celebration of fall.

At Blue Rose Girls, I have a poem by Bruce Weigl entitled Home.

Laura has the Poetry Friday Roundup at Author Amok.

Posted by Elaine Magliaro at 8:45 AM

I'm so with you in the love of fall. I can't wait to break out the sweaters and kick through the leaves.

I hope your fall is beautiful!

The weather here has been great the past few days--sunny and dry with just a hint of fall in the air. I love when the leaves turn. It's so beautiful here in October.

Oh, these are lovely. And I'm delighted that you're on the Cybils Poetry panel again!

I was sorry to see that you won't be one of our poetry judges this year.

What a wonderful fall bounty of books! I'm forwarding this post to a teacher friend in Hawaii. Kids there can only experience fall colors and the magic of the season through good books like these.

Thanks, as always, for the great resources. I also am in love with Autumn. Best season ever.

Also, I CAN HARDLY BELIEVE MY EXCELLENT LUCK that I'm on the Cybils poetry committe with you. WOO! I'm going to learn so freakin' much!

Elaine,
The leaves are just beginning to change here in Maryland. I love everything about autumn including: apple cider, the smoke coming out of chimneys, pumpkins, the way the air feels...
I feel so sad for people who don't live where there are four seasons.

I'm so glad you ladies will be joining the 2008 Cybils Poetry Panels! Woohoo!!!

No leaves have started to change here yet--at least not in the area of Massachusetts where I live.

Lovely! I adore Chill in the Air--it's a favorite fall collection, for sure. Autumnblings is fun, too. Not sure if I've seen the Schnur one. Off to put it on reserve.

Poetry and autumn...two of my most favorite things:>)