OLIVER FINDS HIS WAY
Written by Phyllis Root
Illustrated by Christopher Denise
Candlewick Press, 2002
Oliver Finds His Way is an exceptional picture book for students in preschool and kindergarten. Phyllis Root’s simple storyline about a little bear who finds himself lost near the edge of the woods, panics, and then thinks of a way to solve his problem, will resonate with young children. Christopher Denise’s illustrations, done in pastels and charcoal, provide a soft autumnal backdrop for Root’s spare text. They capture the flavor of the season and closeness of this loving “bear” family.

One fall day, while his parents are doing chores outside, Oliver chases an autumn leaf that is blown by the wind. He follows the big yellow leaf…

down the hill,
around a clumpy bush,
under a tree,
and all the way
to the end of the woods.

Soon enough, Oliver discovers that he is lost. He tries to find his way back home--but the tree he runs to is not the twisty one he had passed before and the bush he runs to is not the clumpy bush he had seen earlier. Oliver’s afraid. He begins to cry…and cry….and cry. But he soon realizes that he’s still lost. He rubs his nose and thinks until he gets an idea. Then he roars and roars and roars--louder and louder and louder--until he hears Mama and Papa roaring back. Oliver is then able to listen to their roars and find his way home.

Note: When I was an elementary librarian, I used the art in Oliver Finds His Way to introduce my youngest students to the concept of setting in picture books. The children could tell just from looking at the endpapers that the story was set out in the country in autumn. Click here to view an illustration from the book. 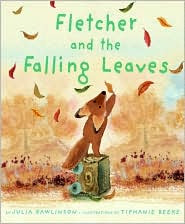 It’s autumn. Fletcher, a young fox, notices that the world around him is changing. Every morning things seem “just a little bit different.”

The rich green of the forest was turning to a dusty gold, and the soft, swishing
sound of summer was fading to a crinkly whisper.

Fletcher becomes worried when his favorite tree begins to look dry and brown. He thinks the tree is sick and expresses concern to his mother. His mother explains that it’s “only autumn” and not to worry. Fletcher runs outside, pats his tree, and tells it that it will feel better soon.

Of course, the leaves on the tree continue to turn brown and fall from the branches. Fletcher catches a falling leaf and reattaches it to his tree--but the wind shakes the leaf loose again.

The next day, a strong wind blows through the forest, and the tree’s leaves are set flying. Fletcher’s upset when he sees a squirrel taking leaves for its nest and a porcupine using the fallen leaves to keep itself warm. Try as he might, Fletcher cannot save his tree from the inevitable. Finally, he clutches the last leaf as it flutters from the tree and takes it home--where he tucks it into a little bed of its own.

The following morning, Fletcher is awed by the sight of his tree, which is now hung with thousands of icicles shimmering in the early morning light. He wonders, though, if the tree is okay and asks: “But are you all right?” Fletcher is relieved when a breeze shivers the branches and the tree makes “a sound like laughter…” The little fox then hugs his tree and returns to his den for a “nice, warm breakfast.”

Fletcher and the Falling Leaves has a longer, more lyrical text than Oliver Finds His Way. Beeke’s soft-edged pastel illustrations capture the tone and setting of this comforting story and deftly convey the change of seasons as autumn turns to winter. 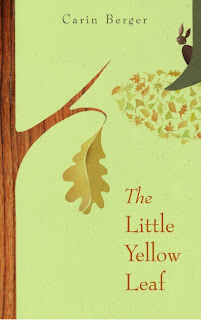 Carin Berger, who did the “bold” and brilliant collage illustrations for Jack Prelutsky’s Behold the Bold Umbrellaphant, hits a high note again with her art in The Little Yellow Leaf. Her illustrations in this book are inventive and striking. Berger even used composition and graph paper as the backdrop for some of her pictures. Her spare illustrations with changing perspectives and her lovely lyrical text partner well in this tale about finding strength in friendship.

The main character of this little allegory is a “Little Yellow Leaf.” It’s autumn. The LYL clings to a branch of “a great oak tree.” “I’m not ready yet, thought the Little Yellow Leaf as a riot of fiery leaves chased and swirled round the tree.” No, the leaf isn’t ready to leave its home in the tree--even as the afternoon sun beckons--even…

Even when LYL sees that the other leaves have “gathered into heaps, crackly dry, where children played,” it isn’t willing to join them. And it still it isn’t ready to leave its home when a harvest moon blooms in an “amber” sky.

LYL holds fast to its branch through a long, cold night when snow falls. It holds fast as days pass. It looks and looks at the tree--but sees only the “shimmer of snow.” LYL is all alone. At least that’s what it thinks…until one day it spies a “scarlet flash” high up in the tree. It has a comrade! Both had been hesitant to cast off for the unknown. The Little Yellow Leaf and the Scarlet Leaf take courage in each other…set themselves free and soar.

I highly recommend these three titles, which will make fine autumn read-alouds.

Posted by Elaine Magliaro at 10:40 AM

Hi Elaine, Thanks for adding these books to our post. I can't believe I forgot Oliver Finds His Way. That was a favorite when CJ was a preschooler.

Oh I just love you, 'cause I've seen those first two books and adore them, but Carin's is new to me and now it's on hold at the library. It looks great. Thanks!

OLIVER FINDS HIS WAY is one of my favorite picture books. I love the text and the art.

I think you'll like THE LITTLE YELLOW LEAF. The book came highly recommended to me by my friend who owns a children's book shop. She was formerly a children's librarian. I think Berger's art is really interesting.