It is a sad thing indeed to see the destruction caused by flooding in our Midwest. It is hard to fathom how people recover from the loss of everything they own--including their homes. I am recommending the following book as one to share with children whose lives have been affected by this kind of “natural” tragedy. 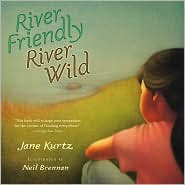 River Friendly, River Wild, classified as a picture book, is really a collection of free verse poems about the actual flooding of the Red River in North Dakota in April of 1997. The fact-based poems relate the experiences of author Jane Kurtz and other people who lived in Grand Forks before, during, and after the flooding of their city.

The book opens with a description of the Red River by the young girl narrator and of her memories of happy days spent watching the river flow past or of playing on its banks or walking across its frozen surface in winter.

From The Red River

The river wiggled
like a fat brown thread
along the flat quilt of the Red River Valley,
stiching North Dakota and Minnesota together.
My friend Sarah and I
ran races up and down the dike.

In early April, the city is beset by a big blizzard. When the snow begins to melt, the river rises…and everyone begins to fill sand bags to put on top of the dikes. The girl’s family decides it must leave home and pack for their stay at a shelter. They must leave their pet cat, Kiwi, behind. The girl relates her thoughts after spending two weeks away from home.

From Ocean of Feelings

Two weeks of waiting
to find out if we have anything left.
My parents don’t know what to do.
They wander around like balls of string,
winding and unwinding.
My mom makes lists
of everything she might have lost.
I wonder where Sarah is
and if Kiwi is scared in our island house
with a rush of water all around.

When the girl’s family is finally allowed back into the city, this is what they see “snowbanks of garbage and sandbags” lining every street--as well as many of the contents of people’s houses: mattresses, lamps, water heaters, sleds, etc.

Now people must deal with the devastation the flood has left in its wake. Families are warned to take care when returning to their home because…

Life back at home is not what it was before the flood. There is no heat, no electricity, no warm water.

The Christmas Box is one of the most touching poems in the book. The family dons rubber gloves and reaches inside the box to check its contents: “The stockings Aunt Emily cut and sewed/the year that I was born…The wreath that Max made with five-year-old handprints/and lots of green paint.” Most of the contents must be disposed of. It’s not easy. As mother says, “It’s hard to throw out memories.”

The young girl feels anger at the flood for all she has lost. She’s mad because her cat is missing and her friend Sarah now lives with her grandmother.

By May 20th, the family’s lawn is strewn with violets and the mother’s “drying papers.” That same day their cat Kiwi appears. Kiwi was rescued by their next-door neighbor--a man who has lost his store and is now planning to start over somewhere else.

The book concludes with the poem Memories and on a note of hope and of looking forward into the future. This is a poem in which the girl tells us she knows that …

some memories live in things--
in old clothes and photographs,
drawings and trees.
Some of those memories we’ll have to let go.
But Mom and Dad and Max and Kiwi
and Sarah and I
will make new memories
and hold tight to the ones that stick.

The poems in this book open readers’ eyes to the obstacles people face both during and after a flood in a more personal way than by just watching a report on the television. We experience this flood through the thoughts and emotions of a young child whose world has been turned topsy-turvy by an act of nature.

The Nonfiction Monday Roundup is a Picture Book of the Day.

Posted by Elaine Magliaro at 10:09 AM

Elaine, this looks great. I'll add it to my library-trip list. Thanks.

What a timely reminder about River Friendly...it such an eloquent and expression of the feelings and worries that result from flooding disaster.