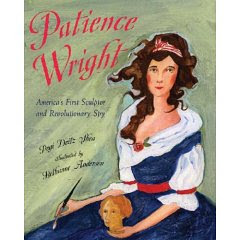 Patience Wright is an excellent picture book biography to share with children’s in the upper elementary grades (3-6)—especially during Women’s History Month.

Patience Wright was born in 1725. She lived at a time in American history when women rarely had careers…a time when women were expected to marry and raise families…and be dutiful wives. Patience was fortunate to have been born the daughter of two Quakers. Quakers “believed women should have rights and education equal to men’s.”

As a young girl, Patience showed a talent for sculpting clay. She married at the age of twenty-three—later than most women of the eighteenth century. Her husband, who was much older than she, did not approve of her art…or her independent ways. He left her no money when he died in 1769. Patience decided she would have to support herself and her children with her art.

With financial help from a friend, Patience and her sister Rachel opened their own studio in Philadelphia. From wax, they made three-dimensional framed portraits, busts, and lifelike sculptures of people. Patience later moved to England and set up shop. Members of the English royalty became her customers. She was even invited to Buckingham Palace in 1773 to sculpt wax busts of the king and queen. But 1773 was also the year of the Boston Tea Party. American colonists were beginning to revolt against England. “Patience found herself in an interesting position to learn and pass on secrets to colonial leaders.” She tricked members of Parliament and military officers into revealing secrets.

Around this time, the British began watching Americans who lived in England. As the two countries approached war, the British intercepted their written communications. Some Americans were even jailed. How would Patience be able to send the information she had gathered back to the colonies? She used her art. She hid messages inside hollow busts and sent them to her sister Rachel. Rachel then sent the messages along to members of the Continental Congress and to other patriots.

The English were suspicious of Patience. It may be that informants fed her false information. Not all her messages may have been accurate—it may be that information she sent didn’t reach the intended people at the right time. Patience soldiered on in England, helping to free and shelter Americans who had escaped imprisonment.

In 1784, after the Revolutionary War had ended and the Treaty of Paris had been signed, George Washington wrote Patience to tell her that he would be honored to have her make his wax portrait. She never got the opportunity. She died in 1786…before she could sculpt the president in person. Only one of Patience’s wax sculptures is still in existence today—a life-size figure of William Pitt that stands near his crypt in Westminster Abbey. One of Patience's children, her son Joseph, did paint a portrait of George Washington and design America's first coins.

In the back matter of the book, there’s an author’s note with additional information about Patience Wright. The book also includes a bibliography and a time line with important dates in Patience’s life and pivotal events in American and British history during her lifetime (1725-1786).

Anastasia Suen has the Nonfiction Monday Roundup at Picture Book of the Day.
Posted by Elaine Magliaro at 9:50 AM

That looks like a good one! How sad that only one of her sculptures survived.

The story of Patience's life is really interesting--and one that would be great to share with a class studying the Revolutionary War.

This is great info to know.