Book Review: What To Do About Alice? 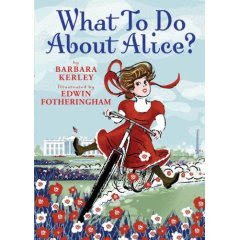 WHAT TO DO ABOUT ALICE?
Written by Barbara Kerley
Illustrated by Edwin Fotheringham
Scholastic, 2008

Are you looking for a great nonfiction book to read aloud to elementary children? One that’s just perfect for sharing during Women’s History Month? Look no further than Barbara Kerley’s newest book, What To Do About Alice?: How Alice Roosevelt Broke the Rules, Charmed the World, and Drove Her Father Teddy Crazy! This picture book biography about Teddy Roosevelt’s oldest child is a delight from beginning to end.

Born in 1884, the precocious Alice was different from most of her female contemporaries. Not one to be bound by the conventions of her day, she enjoyed living her life to the fullest. She rowed across Oyster Bay for picnics. “She roamed the streets of Washington from the Capitol to the gypsy camps by the racetrack.” She was a tomboy. She even joined an all-boys club.

When Alice’s father decided she should begin attending a prim boarding school so she could grow up to be a proper young lady, she spent the summer in despair. Her father relented. She didn’t go to school that fall. Instead, she stayed home and educated herself by reading the books in her father’s library. “She taught herself astronomy, geology, and even Greek grammar. She read Twain, Dickens, Darwin, and the Bible, cover to cover.” She also developed an interest in politics.

When Teddy became president, Alice welcomed visitors to the White House with her pet snake named Emily Spinach. She stayed out late at night. She sped around town in her runabout. Despite her father’s admonitions not to speak to reporters when she was out gallivanting, she often made headlines in gossip columns. Conservative women’s groups thought her behavior was “outrageous.” What her father referred to as “running riot,” Alice called “eating up the world.” Teddy had trouble keeping his high-spirited daughter in check, once remarking: “I can be president of the United States, or I can control Alice. I cannot possibly do both.”

During Teddy Roosevelt’s second term of office, Alice traveled abroad for four months—to Hawaii, Japan, the Philippines, and China. In addition to returning home with twenty-three cases of “loot,” she came back with a fiancé named Nicholas Longworth, a congressman she had met on the trip. Eight hundred guests attended her wedding at the White House.

The irrepressible Alice, whose life was immersed in politics, also became a great asset to her father. She served him as a goodwill ambassador. She was also a trusted adviser. But whatever Alice did…wherever Alice went, she always played by her own rules.

Barbara Kerley’s well-paced text is lighthearted and would be a fine biography to read aloud. Young children will, no doubt, enjoy hearing about the early years and antics (waving wildly to friends at her father's inauguration, jumping fully clothed into a ship’s pool) of a president’s rambunctious child who was full of life—and lived life to the fullest.

Visit Barbara Kerley's website for Classroom Ideas, which includes "fun" ways to use her books--including What To Do About Alice?

Anastasia Suen has the Nonfiction Monday Roundup at Picture Book of the Day.
Posted by Elaine Magliaro at 1:30 PM

This sounds great! Sound like something my kids will enjoy.

I really enjoyed this book. I think it would be great fun to read aloud--especially to young girls.

I read this book to second graders in the library and they were rapt with attention. The Obama girls moving into the white house soon makes this book perfect for these months!

this kind of topic is good for people to learn more about it, and that people should be every day less ignorant, and medicine for this is the reading of issues like this