Looking for some Christmas poetry? Here are some suggestions for you.

Try the Web sites of the Poetry Foundation and the Academy of American Poets. Both sites have a selection of poems for the holiday.

Poems that can be found at poetryfoundation.org include the following:

Poems that can be found at poets.org include the following:

Looking for some collections with Christmas poems for children? See if you can find the following books in a local book store or the public library. 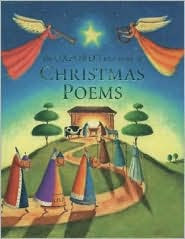 This illustrated anthology of fifty-four poems contains a number of traditional works, including The Twelve Days of Christmas; Away in a Manger; Oh, Would You Be a Shepherd Boy?; Joseph and the Angel; and It Was Poor Little Jesus, an American spiritual. There are poems by Eleanor Farjeon, Elizabeth Coatsworth, Elizabeth Madox Roberts, and Langston Hughes. Although there are three poems by Jane Yolen in this anthology, most of the contemporary poetry selected by Harrison and Stuart-Clark was written by British poets whose names are less familiar to Americans. This slim volume containing twelve Christmas poems is An I Can Read Book. Except for the excerpt from Away in a Manger, all of the poems were specially commissioned for this book. The poems are short—and many are rhythmic and rhyming.

The book opens with a poem entitled Waiting, in which a child speaks about her anticipation of the arrival of Christmas.

From Waiting
by Maria Fleming

And I go on waiting…
and waiting…
Waiting’s the worst.
Because Christmas is coming
and I’m ready to BURST.

There’s a lovely mask poem by Rebecca Kai Dotlich in which the poet speaks in the voice of the holiday.

From Soon
by Rebecca Kai Dotlich

I am tinsel.
I am plums.
I am jingle bells,
tin drums.
I am Santa’s
midnight sleigh.
Soon I will be
Christmas Day.

The anthology ends with a poem about a snow globe—also written by Maria Fleming.

From Snow Globe
by Maria Fleming

Shake it,
and it snows and snows,
and Christmas never
ever
goes. 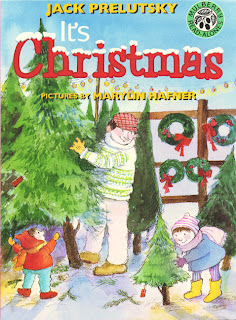 Let’s not forget Jack Prelutsky’s book It’s Christmas. Originally published in 1981, it is still in print today. This collection of rhythmic, rhyming poems about a Christmas tree, a letter to Santa Claus, Christmas cards, singing carols, and presents has real child-appeal. The poems in this book are fun to read aloud.

Click here to take a peek inside this book. 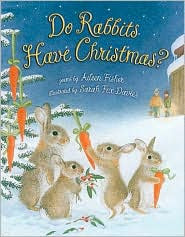 This posthumous collection of winter and Christmas poems written by one of America's finest children's poets is topnotch!

Click here to read my review of Do Rabbits Have Christmas?.

Posted by Elaine Magliaro at 8:50 PM

It is nice to read your poetry, very well written, keep writing this type of amazing poetry.