When I was teaching elementary school, I liked to start the school year off with poetry. I’d make little booklets of end-of-summer and going-back-to-school poems to share with my students on the first day. My students would take the booklets home to read with their parents that night. Here are some of the poems in the “little” anthologies I compiled: Leavetaking by Eve Merriam, Summer’s End by Judith Viorst, Lunchbox by Valerie Worth, Now by Prince Redcloud, September Is by Bobbi Katz, September by Lucille Clifton, Back to School by Aileen Fisher, First Day of School by Barbara Juster Esbensen, and The First Day of School by Aileen Fisher.

As you can see, I’ve included links to the poems I found posted on the Internet. Here are the titles of books in which the poems can be found:

Now by Prince Redcloud: THE SKY IS FULL OF SONG selected by Lee Bennett Hopkins

September Is by Bobbi Katz: ONCE AROUND THE SUN by Bobbi Katz and SUNFLAKES: POEMS FOR CHILDREN selected by Lilian Moore


Here are short reviews of two school-themed poetry books. One is a collection written by Dee Lillegard; the other is an anthology with poems by a variety of poets. 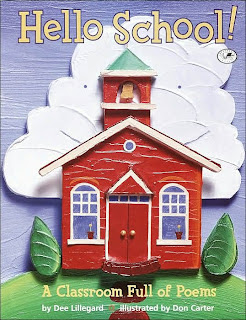 Hello School! Contains thirty-eight short, rhyming poems about all kinds of objects found in an early elementary classroom and on a school playground—including paper, crayons, scissors, glue, an easel, a paintbrush, clay, blocks, a water fountain, swings, a slide, and letters of the alphabet (They stand in line from A to Z/longing to be wild and free/to fly away like breezy birds…/in a flock of words.)

Following is one of my favorite poems in the book:

Opens up and spills out
capes, scarves, a pig’s snout,
a clown’s nose and floppy feet,
witch’s wand and ghostly sheet,
wigs and hats of every hue…
Get ready to be someone new.

Most of the poems in this collection are no longer than three or four lines…and would be great for sharing with young children in pre-kindergarten through first grade. Don Carter’s colorful three-dimensional illustrations stand out against a white background and really do add another “dimension” to Lillegard’s brief poems. I think they are a perfect fit for the poetry in this book.

CLASSROOM CONNECTION: This would be a good book to use throughout the school year to spark the writing of collaborative poems about objects found in the classroom and on the playground. Of course, the collaborative poems wouldn’t have to rhyme. The teacher could encourage children to pretend that the objects they write about are speaking and write mask poems like Lillegard’s Glue, Puppet, Xylophone, and Wastebasket (Feed me, feed me!/Yum yum yum…/Toss your tidbits/into my tum!). The teacher could also show his/her students how to use personification as Lillegard does in many of her poems. For example, she writes about a rug that “Likes nothing more/than snoozing/on the floor…” and a paintbrush that “gets paint in his hair” and a chair that “Prefers your seat/to your feet.”

If a teacher worked with his/her students to write one poem a week, the class would have written more than thirty poems by the end of the school year. The poems could be photocopied, collated, and bound in booklets. A booklet could be given to each student to illustrate and take home as a gift for his/her parents at the end of school in June. 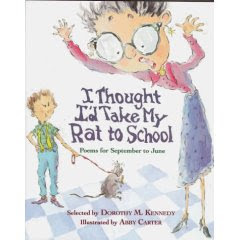 I Thought I’d Take My Rat to School is the most comprehensive book of poetry about school that I have read. It contains fifty-seven poems by many of America’s greatest children’s poets, including David McCord, Aileen Fisher, Nikki Grimes, Arnold Adoff, X. J. Kennedy, Karla Kuskin, Myra Cohn Livingston, Eve Merriam, and Lilian Moore—all recipients of the National Council of Teachers of English Award in Excellence in Poetry for Children. There are also poems by Eleanor Farjeon, Nikki Giovanni, Ted Kooser, Jack Prelutsky, Gary Soto, Judith Viorst, Jane Yolen, and Carl Sandburg.

This anthology takes us through the school year from September to June with poems about school buses, going back to school, being the new boy at school, arithmetic and math class, recess, a science lesson, lunch, a spelling bee, art class, a school play, homework, and the first day of summer vacation. Many of the poems are rhythmic and rhyming; some are humorous; some are wistful; and some…like I don’t understand and The Schoolbus Comes Before the Sun…are more serious in tone.

From I don’t understand
by Nikki Grimes


From The Schoolbus Comes Before the Sun
by Robert Currie

And here is an excerpt from one of the funny poems in the book:

I Thought I’d Take My Rat to School has many poems that would appeal to children in the early elementary grades. It also contains poems that are appropriate for sharing with students in the middle grades. This is definitely a poetry anthology that should be included in a school library collection.

Today's Poetry Friday Roundup is at The Book Mine Set.

Posted by Elaine Magliaro at 8:30 AM

I'm actually taking a break from teaching this year, but this is making me rethink the decision. Great recommendations.

What will you be doing during your break from teaching? I taught elementary school for more than thirty years. I took a couple of breaks during that time...and came back to school refreshed.

One of my favorite parts of planning the school year is figuring out what poems we'll read and which the kids will learn by heart. I can't plan everything -- some poems just make themselves known at the right time -- but it does give me a chance to go back through all of our poetry books, and look for new ones at the library!

I also loved searching through my poetry books and collections from the school library to find poems to connect to the science and social studies units I taught, to math...and to other literature I shared with my students. I really believe that poetry enriches a child's education.

hey its sandy, here is the website i was talking about where i made the extra summer cash.......... the website is here

hey its sandy, here is the website i was talking about where i made the extra summer cash.......... the website is here

Excellent compilation, Elaine. I sent the link to my mother who teaches pre-school children who are autistic.

In my own home, my kids are a little older. I have two in high school who started up last week again. We seem to start earlier every year.

I wonder how many of those children still have those booklets they brought home and read to their parents. I know I would've kept mine! What a lovely idea.

As a former elementary school teacher, I have the greatest respect for people like your mother. Too often their work goes unappreciated.

My students really loved the anthologies I compiled of the original poems and stories they had written during the year. I used to bind them, tie them up with ribbon, and my students would give them as gifts to their parents when we invited them to come to the classroom during the last week of school.

I'm working for an airline- doesn't get much different than a classroom than that!