A Chicken Book for Chicken Spaghetti

I wrote this review especially for Susan Thomsen and Junior. Check out Saturdays with the Flock to see a picture of one of Susan Thomsen’s chickens. 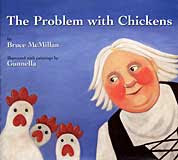 THE PROBLEM WITH CHICKENS
Written by Bruce McMillan
Illustrated by Gunnella
Houghton Mifflin, 2005

Bruce McMillan lives in Maine—but he has made many trips over the years to an island country that he loves: Iceland. The Problem with Chickens, in fact, is the seventh book of his that is set in that country. McMillan is most well known for his nonfiction books illustrated with his photographs. His inspiration for doing a picture book about chickens came to him after he bought an oil painting by Icelandic artist Gunnella.

From Bruce McMillan’s website: Gunnella's paintings have a narrative quality about them, and people always smile when viewing her art at an exhibition. I saw a book in them. With so many paintings with chickens I knew I could develop a story, I did and Gunnella liked it. Then Gunnella filled in the few gaps where we needed new art.

The Problem with Chickens is a humorous tale. It’s set in a village in Iceland where there are no chickens…but plenty of eggs. Unfortunately, the eggs laid by wild birds on the sides of cliffs overlooking the ocean are too difficult to reach. The ladies of the village want eggs for cooking. So what do they do? Why, they decide to go to the city to get some chickens. Alas, getting chickens doesn’t solve their problem of having no eggs for long. And why, you might ask, is that? Well, you see, these chickens start acting like the ladies of the village. They go blueberry picking with them. They tag along with them to a birthday party. When the ladies sing to the sheep—so do the chickens. In fact, they’re so busy following the ladies around and acting like them that they stop laying eggs. That’s when the ladies decide that they really have a PROBLEM with their chickens.

These Icelandic females are no slouches when it comes to devising a clever plan to outwit their avian antagonists. The ladies start to exercise. They know the chickens will follow suit. Soon their wings are so strong that the chickens can actually fly. That’s when the ladies lift them into the air and set them to flying at the edge of a cliff where no wild birds roost. The chickens safely land on ledges on the side of the cliff, build nests, and—yes—lay eggs. So how is the problem solved if the chicken eggs are now nestled on the side of a steep cliff like those of the wild birds? Why, the ladies also got strong from all their exercise. That was part of their plan. They rig up a pulley system at the top of the cliff and while one woman collects eggs from the nests, her comrades hold onto the rope from which she hangs. From that day forward, the ladies have no problem with their chickens.

McMillan’s text is spare. Much of the story is told through Gunnella’s colorful folk art style illustrations, which are a perfect complement to this original story with the flavor of an old tale. Gunnella’s village women are round-faced and buxom and always shown wearing aprons and babushkas. The illustrations have touches of droll humor, which add to the fun of McMillan’s lighthearted story. A reader can't help but smile when looking at pictures of chickens lounging alongside the ladies on a hillside, peeking out from the greenery at the ladies while they are enjoying their tea and cakes, and pushing small boulders through a meadow with their wings.

The Problem with Chickens was a New York Times Best Illustrated Book of 2005 and a recipient of a Parent’s Choice Foundation Seal of Approval.

Visit The Problem with Chickens page at Gunnella’s website to view some of the book’s illustrations. 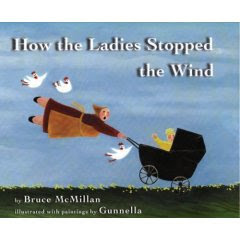 The second book collaboration between McMillan and Gunnella, How the Ladies Stopped the Wind, will be published this fall.

Posted by Elaine Magliaro at 5:15 PM

Oh, boy! Thanks, Elaine. I've heard of this one and now MUST request it at the library!

I have some other "chicken"
books that I can recommend to you. I hope you like THE PROBLEM WITH CHICKENS.